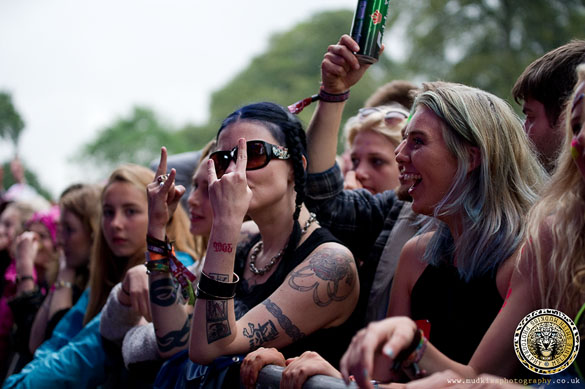 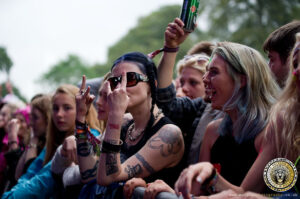 It’s one of Louder Than War’s favourite fixtures in the festival calendar and this year didn’t disappoint.

There is a rhythmic drumming all around me. It is a gentle thrumming which becomes a taut tapping which in turn becomes a pounding that leaves all other sounds muted in its wake. I close my eyes and let the complicated time signatures of Cumbrian rain beating on the canvas of my tent drown my thoughts.

This, then, is less than ideal festival weather. Lowther Deer Park is quickly becoming a gloopy muddy mess of a site as campers drag their belongings and crate upon crate of beer toward their temporary weekend homes.

The festival uniform of Daisy Duke short shorts, kimono, fluro facepaint, designer Wellies and flowers in the hair is offering scant protection beneath the rustle of a plastic poncho but where the skies remain resolutely grey this multitude of people are colourful and playful in their field garb. The unavoidable conditions in these north west fields are but a minor inconvenience to most, the focus is set firmly on the stars, as Kendal Calling 2014 promises to take us all into space.

For a medium-sized festival Kendal Calling is gaining a reputation as an imaginative and friendly event showcasing great music from across the region while also boasting a line up of big indie bands touring the circuit. This year their main stage will be headlined by Suede, Frank Turner and the Sleeping Souls and Example while across the other stages we’ll get the likes of 2ManyDJs, Bird, The Lottery Winners, Jimi Goodwin and Craig Charles’ Funk and Soul show.

The music is only part of the attraction though. In his review of Suede’s Friday night headline slot (and a subsequent discussion piece) Louder Than War editor John Robb asks whether we’re nearing a time when bands will be unnecessary at festivals; is it already a minor part of the experience, he asks? If it is then Kendal will be well placed to survive and grow as much thought is already placed on the details that make this more than just a place to stand and watch a procession of bands, but more of a holistic event you can experience in many different ways.

At Kendal it starts with the theme and for 2014 this is Beyond the Stars. As the hoards make their way to the arena they are greeted by a sculpture of a rocket, nose down in the ground. Elsewhere the TARDIS tempts people into photo opportunities, a Silver Machine rowing boat floats beneath a model of the Milky Way and a UFO hovers above hay bales. It is this detail which helps to transport people away from everyday life and makes the site a playground, smiles of discovery and delight on faces all around.

A new addition this year is the Luna 9 360 degree stage, a small planetarium providing immersive audio visual performances across the weekend including visualisations of Pink Floyd’s Dark Side of the Moon and Wish You Were Here.

In the dark under the dome people lie back on the scrubby grass, huddle around the edges, stand in the doorway and all gaze upwards as the images dance across the ceiling and the album playback fills their ears. It floods these two senses so completely with psychedelic light and sound that everything else seems to cease to exist.

But the festival slip slides on outside this stage – a heavy focus on indie with some variation offered across the Riot Jazz and Chai Wallah stages. But even where the music is permutations of boys and girls with guitars we get a mix of new and established artists, original material and cheeky covers.

Bands that are being allowed the space and time to mature as artists return to the festival too and their growth in popularity alongside as bands is clear from billing and evident in quality of sets. Just a couple of years ago both The Lottery Winners and The Gramotones were hanging around Tim Peaks Diner and this year the former headlined the Woodland Stage on Friday night while the latter played the Calling Out stage having recently returned from support slots for Paul Weller. It strikes that Kendal Calling is neither too obsessed with the shiny and new nor stuck in a backward looking nostalgia, rather is a relaxed and safe place for good music and artists regardless of the place in their career.

And so we look to the oldest band to play the festival in 2014 – The Membranes (and yes, disclaimer, Louder Than War editor John Robb is in this band) who fill the House Party stage just as the sun shows up for the first time on Saturday afternoon. As the driving chords of The Universe Explodes in a Billion Protons of Pure White Light expand in the humidity of the tent the crowd of old timers, families bouncing bemused but smiling toddlers on shoulders and the new wave of punks gather in a pack in front of the stage. They are blasted with pure rock n roll energy – a set and songs that leave giddy smiles on faces and heartbeat’s racing.

Elsewhere bands took on more than one performance – The Hummingbirds play House Party and then headed up to the Diner for a second go, some of the crowd following to get another helping of their honky tonk take on indie rock.

Another band to grow over the last couple of years Bird headlined the Woodland stage; the forest realm, trees hung with lights, body heat and rain creating a mist amongst the crowd. Although their atmospheric harmonies and other-wordly melodies were pulled by the tether of a struggling PA their sublime pop transcended and lifted us beyond the reality of that moment, to a place of imagination and magic. A perfect setting for this wonderful band.

Away from the lights amongst the trees neon facepaint and glo-sticks adorned those partying into the night with 2ManyDJs. A girl with flowers in her hair and glitter across her cheeks, sunglasses firmly on despite the dark of the marquee, weaves a hand through imagined curls of smoke in front of her as she leads her friends deeper into the crowd. Coming the other way are two people in V for Vendetta masks, blank eyes set on hedonism rather than anarchy tonight. In the back corner of the tent a man in full Stormtrooper get-up throws his hands in the air as from the stage way ahead more beats drop. The crowd succumbs to the cliche of big-fish-little-fish and show again that while not unpleasant ‘doing a festival’ is a dance we’ve all had a turn around the floor to before, that we are following steps rather than being swept by emotion and energy.

Outside Frank Turner and the Sleeping Souls are giving one of the best headline performances of any festival this year. A huge crowd gathering, stomping in the mud and raising their voices to the night skies for a set which included Photosynthesis, Long Live the Queen and Wessex Boy. Those who were fans already and those who just happened by as part of this weekend were equally impressed with his presence and melody.

But the festival magic is temporary and lasts a scant three days of every year. By Sunday night the filthy festival goers were beyond caring about the levels of mud or the extra beat of the rain, and the ninth Kendal Calling closed out with one of the most surprisingly spectacular main stage headline acts as Example gave many the highlight of their whole weekend.

The gathered masses reflected his energetic bouncing as best they could and fell full force for the flattery of being told they were better than a recent Belgian crowd he’d played for before ticker tape and fireworks provided one final wow moment.

Kendal Called and we all answered, as no doubt we will again in years to come. See you in the fields, come rain or shine, in 2015.