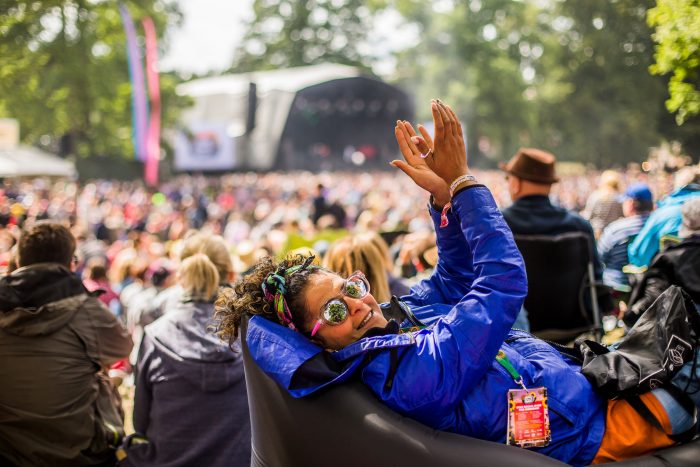 Now in its eleventh year and a firm highlight of the festival calendar we stop by Kendal Calling to catch some sun and music in the Cumbrian fields. LTW editor Sarah Lay was at the festival to host on stage interviews for us on Sunday and reports back.

I smile as I spin the paper cup in my hands, watching the steam gently rise as people whirl around the chequered dance floor of the Tim Peaks Diner to the UK Garage classics Barney Artist is playing. I can’t help it, the smile, Kendal Calling is just one of those places full of those moments that make the happiness break out all over you in giggles and open-mouthed wonder.

Now in its eleventh year Kendal Calling has become a firm favourite in the festival calendar and this year was headlined by The Charlatans on the opening Thursday night and then Rudimental and Madness before Noel Gallagher’s High Flying Birds closed the main stage amid flares, fireworks and Oasis-sing-a-longs on Sunday. There have been surprise intimate performances from Pete Doherty in the Diner, new and emerging artists from all around the world including Kelis, PINS, Sugarhill Gang, Ash and Beds in Parks. If you can’t find something to like here it’s likely you don’t like much at all.

Around each corner of the site is another enchanting moment to stumble across. As the smell of freshly fried Churros wafts toward the woodland three people with deer heads stalk the crowd, their heads tilting at the beats emanating from the Jagerhouse. Glitter sparkles across sunburnt cheeks, giant sunflowers pinned into tent-fuzzed hair (the sale of the flowers raised £11,106.51 for charity Hospice at Home Carlisle and North Lakeland while Tim Peaks Diner raised £10k for the David Lynch Foundation). Across 15 stages there has been music, comedy, performance and conversation. 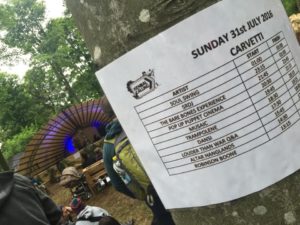 That’s my role today: conversation. I’ve been on site for only a few hours to host some live interviews on the Carvetti Stage in the Lost Eden area of woodland, on behalf of Louder Than War. As people lazed around on the wooden benches in front of the stage, or strolled past all dressed in their glitter, headdresses and animal tails, I chatted with Tear, False Advertising, and Paddy Considine of Riding the Low all of whom would take to other stages that day.

Although each conversation was different there was a theme running through; the appreciation of the privilege and pleasure that comes from making music. Each of the bands tell their own story of doing things their way, of how it isn’t easy and day jobs are needed, but that there is nothing to complain about in getting to hang out and create music with your best mates. It’s the most fitting story any of them could tell on an afternoon as sunny as this, in a setting so laid-back and lovely.

Earlier that afternoon False Advertising had drawn a crowd to the Calling Out Stage and played a great set of their punk pop tracks and then came to talk to me about their DIY ethic and how they’ve learnt that playing to their individual strengths brings them a collective reward.

Tear take to the makeshift stage in Tim Peaks Diner around tea time on Sunday. Signed to O Genesis, the label run by Tim Burgess, they’re not the first band to play the fifth birthday celebrations taking place in this physical version of the diner he first dreamed up on Twitter. It is only their drummer’s second gig – she tells me in the interview she hadn’t played drums until three months ago – and I’m astounded by the bravado but also the brilliance of this woman and this band.

And while Riding the Low frontman Paddy Considine may well be recognised as one of the best contemporary actors of our time his band is far from a vanity project. As they play under the neon carnival decorations of the House Party stage their ‘gang for good’ mentality shines out, their rock n roll energy pulsating through the dancing crowds.

My short time at Kendal Calling was enough to become fully immersed in the magic that pervades the Lake District site, to remember how full of delights this festival is, and to wish I’d been able to spend much longer here. It also reminded me why I’m involved in music, the magic and the madness of it, and the opportunities a place like this can bring.

I guess I’ll see you in the fields next year, yeah?

Kendal Calling 2017 has already been announced as taking place 27-30 July 2017 and you get the latest on early bird tickets by joining the Facebook event here or following the festival on Twitter. Find the Kendal Calling website here.

Sarah is editor of Louder Than War and she hosted live interviews with Tear, False Advertising and Paddy Considine of Riding the Low on Sunday afternoon at Kendal Calling. You can find her on Twitter or more articles by her in her author archive here. She provides the LTW recommended track of the week on Radio Andra’s The Rumble – tune in every Tuesday from 8pm or find the podcast here. She also runs independent record label Reckless Yes.