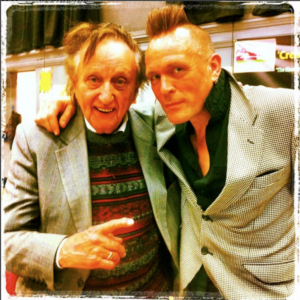 Farewell Ken Dodd – the last of the music hall greats. You were famous for your four-hour sets – like a gargantuan Grateful Dead set length of ancient jokes from another time, a time of smokey music halls, Blackpool piers and northern nights.

Farwell Ken Dodd and your exploding inevitable hair that seemed to reach like tendrils into the sky – plucking breakneck jokes out of thin air like another generation surrealist a kinda Mark E Smith from another time zone with a fervent imagination of city hobgoblins.

Farewell Ken Dodd – the mayor of Knotty Ash who still lived in the far-flung Liverpool suburb in the house where he was born and where he came down to meet me one afternoon when we were doing a panel in the local village hall. A village hall steeped in salty scouse history where Doddy had performed in the tumultuous sixties and where the Beatles had cut their teeth before they were screamed into the ether five years before Ken Dodd pipped them to number one with Tears – the best selling song of the psychedelic year of 1967.

Farwell Ken Dodd another installment from my far-flung childhood with your Dali-esque Sundaafternoonon show – prime time entertainment that was closer to that aforementioned surrealism by mistake than cozy teacake weekend TV. A show with the felt diddy men running amok across the cathode ray like Doddy’s bizarre imagination. Farewell, Ken Dodd, you were alive and kicking to the end – a live wire of effervescent madness missus in a world gone bland with your tickling stick and punishing machine gun of endless gags.