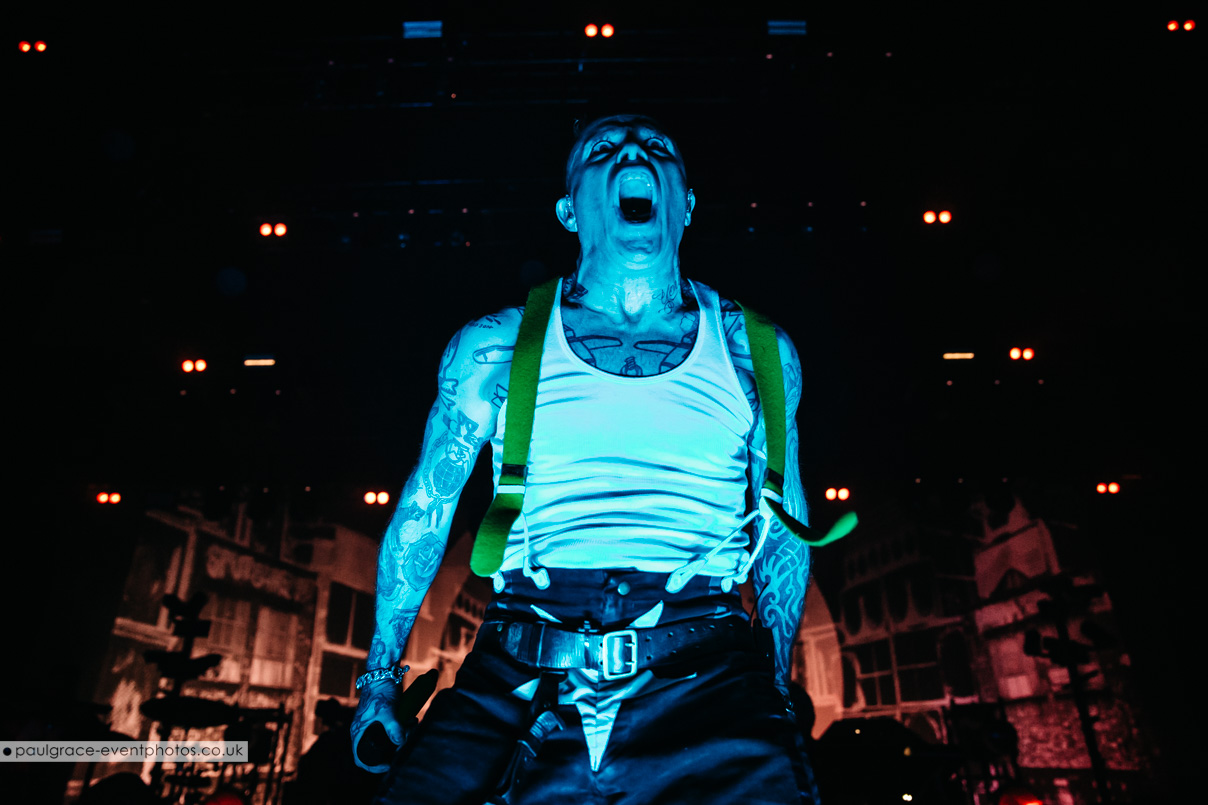 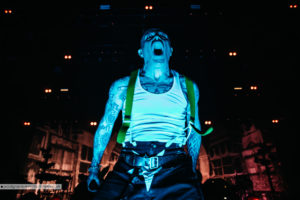 There is a riot going on.

In the middle of it all is a perfect waif like creature, a hi tech dayglo blur in the wind tunnel of sound, a Johnny Rotten for the jilted generation whose eyes and clothes perfectly capture the music in flesh, bone and blood.

Keith Flint embodied the noise and confusion and the perfect freak power of this juggernaut band who somehow became the biggest live draw in Europe with the kind of wild and feral gigs that usually only us and a few freaks embrace.

There have been few bands who somehow managed to gather all tribes into one riotous whole.

But then there have been few bands like The Prodigy and when you are in that high decibel moment it feels like forever.

And when someone who seemed so alive dies it always hits you in the gut.

Keith Flint was the streaked mascara, wild eyed, ball of energy that was the perfect anti pinup and whose face captured the perfect delirium of rave culture, the high decibel wildness of rock and the thrilling intensity of punk and the gonzoid terminator stomp of industrial into a flesh and blood whole.

He was the perfect freak show, the wild eyed shamanic totem of the techno warlords – the Prodigy, a hi tech Elvis with his white belts and screaming eyes, a made up, freak faced statement of riot madness. Like a cartoon villain from a batman film, he was a larger than life presence. His rasping drawl is one of the great signatures of nineties British pop music and his charismatic presence on the band’s videos helped to define the time with the double mohawk blur of energy cajoling and energising huge audiences with perhaps the weirdest and wildest band to ever storm the gates of the dullard mainstream – a mainstream that, to this day, will run a mile from music as heavy as this. A music that doesn’t obey the banal rules of pop imposed by radio playlist cowards and the banal guardians of public taste and their rules of music that when they are trashed so mercilessly is always a thrill.

I once supported the Prodigy at a mental seat of the pants gig in Macedonia in 1996 that I played with my band Goldblade. They were good guys and Keith was a sweet man, down to earth like all great punk rock bands, and tore it up that night in a venue dripping with sweat and piss and machine gun toting cops dancing in the aisles. It was a surreal and wild experience and still one of the best live shows I’ve ever seen a band deliver.

Lets not forget that as well as these huge headlining shows, barnstorming festival appearances, wild gigs and party to the extreme, the Prodigy were also fantastic innovators. They were reinventing and changing the music and cultural landscape in so many ways that they just never got the credit for. They married beats and noise and criss crossed all rebel musics into a supernaut juggernaut whole – it sounds easy but many have failed and no-one did it with such high decibel joy.

The Prodigy were fantastic rebellion, a free wheeling perfect noise that you could dance to

And a celebration of all that is great about pop music.

They had high decibel noise thing down. They made truly weird and wonderful songs that they played like the toughest hardcore band in the world and they looked cool as fuck – like a cartoon strip cranked on the darkest drugs drooging out on the stage- a total rush of insane and lunatic energy. This was a clockwork orange played out on huge stages.

Keith was one of the long haired dancers in the early days. The extrovert mate who helped Liam believe. The foil to his studious studio mate’s bedroom brilliance. As the band moved on from rave PA’s and into their punk droog phase they began to look like the coolest gang in the world. In UK pop culture the creativity goes way beyond music. Keith Flint knew this. He knew, like all the great British style freaks like Jordan in the punk days, that the wild styles are as important as the beats and the tunes.

His self created image was a stoke of genius. A digital hardcore update on the Steptoe look of John Rotten – this was a techno punk for the 21st century and sartorially explained this band’s perfection of all the rebel cultures – the clothes matched the beats – the beats matched the clothes – and the dancing embodied the music – it’s what British pop culture is so damn good at. It’s that respect for the all round creativity that goes beyond strumming a few chords on a guitar and is at the heart and soul of what we do.

And then Keith got even more creative.

His lyrics for the iconic Firestarter perfectly capture the moment of wildness – the total abandon of being on stage and by extension of being in the audience. They caught that wild eyed moment of total freedom that we all get in our lives when we are in a wild joyous mass totally freaking out to amazing music. That moment when nothing matters and we are going to live for ever, dancing and laughing and screaming to the perfect music.

The moment when the music gives the permission to throw away the chains like all great bands do. It’s what the Prodigy were so perfect at and it the real revolution in rock n roll. It’s never a manifesto or a conventional political statement but the clarion call to freedom however short lived. Firestarter was the Anarchy In The UK of its time – the same sentiment – neither song was about anarchy or fire it was about that moment of shackle free freedom.

In the nineties as music got more sensible and the past was plundered for inspiration, the Prodigy were fast forwarding to the future armed to the teeth with high energy noise that totally communicated with its huge audience.

Every festival was a dust, sweat and high decibel meltdown. Liam Howlett was of course the genius, the beat provocateur who came up with these groundbreaking mash ups of hip hop, techno and the Sex Pistols, the intersection between rave culture and punk’s nihilistic raw power but his generosity allowed his lieutenant like the powerhouse Maxim and the charismatic Keith fronting this wild circus.

Their enormous personae towered above the dustbin indie bands that fill up a lot the festivals nowadays. The Prodigy learned pretty fast that larger than life was the key and it’s a largeness that comes not only from their performance but also their music which is built to make a huge crowd party in the most intense way possible.

Somehow they have managed to take the scale and scope of metal and the brutal rush of primetime hardcore as well as the huge bass banging on the one of techno and rave and create this ultimate party machine. They sound super tough like the best rock band in the world and that’s the key to their crossover- the way that they utilise every rebel music that ever existed and turn it into a machine like whole.

They also fuck with the music, so what if band genius Liam is making most of the sound with his electronics, he’s stripping down, building up and changing the songs as he goes along, this is about as live as the digital can get and it’s brutally effective.

In the mid nineties the Prodigy were the band. Blur v Oasis may have been a handy narrative but Fat Of The Land was number one in 26 countries whilst Albarn and the Gallaghers were battling it out in the UK press. As great as those two bands were the Prodigy were forging a new future and taking electronic music into new soundscapes. They may never get the credit but they were inventing a future and also supllying a handy intersection for people to go from Britpop to rave, from techno to industrial from pop to metal and pretty well pioneered the no genre modern approach to music whilst creating the heaviest and best party in town as the perfect band for their times – combining the insolence of the Sex Pistols with the communal rush of rave.

Keith and the band would turn up at a festival, headline and create a meltdown. They were one of the best rock bands in the world and were as punk as fuck. They broke all the rules and made some of hardest, weirdest records to ever get to number one and they took this deranged, filthy, heavy nightmare cartoon of thrilling raw power round the world to every festival you can think of and totally tore it up.