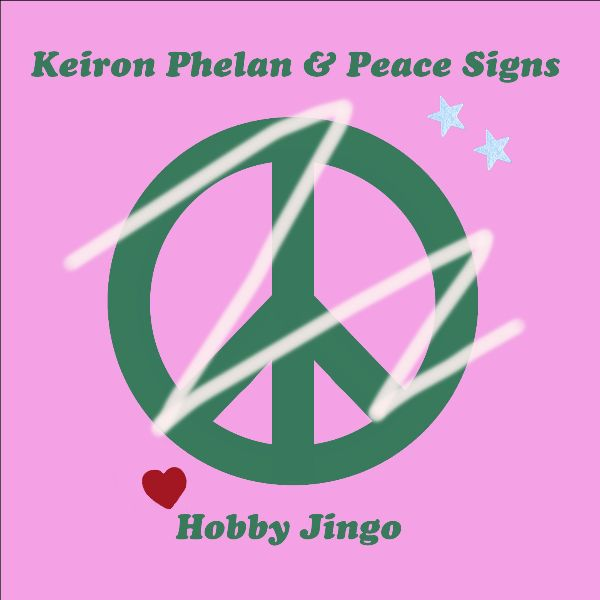 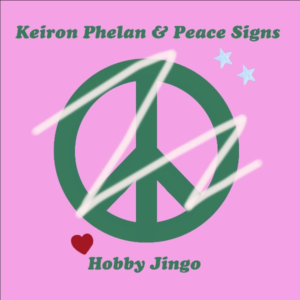 New 13 track album by Keiron Phelan & Peace Signs, featuring covers of Bill Fay’s Goodnight Stan and Break, which was originally cut by Aphrodite’s Child’s, plus 11 self-penned numbers. This is a follow up to the well-received Peace Signs debut album from 2018..LTM’s Ian Canty might be past it but he has a go at a new pastime…

A new name to me, Keiron Phelan has involved himself in a variety of musical aggregations since 2000. He came to my attention via a recommendation from the great John Howard, so I was intrigued from the off. Hobby Jingo, recorded with backing band Peace Signs, is the first of his recordings to reach my lugs. So I pinned them back and dived straight into the album, finding delicate and lush musical landscapes, much invention and imagination. All this is allied to a lyrical muse that keenly zeros in on both the good and bad emotional experiences life has to offer with a irrepressible wittiness.

Hobby Jingo begins in wonderfully light fashion with the title track, the initial pedal steel guitar and jazz pop stylings eventually giving way to a soaring, well-judged vocal, piano and flute. This instantly manages to conjure up something that feels new and fresh, but also is evocative of past times. The song coasts along shining bright, with a false ending that helps emphasise the warm refrain once more.

Following on in an easy drifting vein, You Never Put A Man Upon The Moon is less upbeat and more reflective lyrically (first line “my flight path has changed” gives a sense that closure has already taken place). The words are edged with regret in using the device of space travel to be juxtaposed with the end of a relationship. A sad sounding clarinet solo that appears seems to expresses the loss of something as well as any words.

Candy Floss Hair picks up the energy again and has lovely deep arrangement with some great backing vocals. This one is like high quality early 1970s pop and with moments of hope in the lyric counterbalanced by the knowledge that feelings are brittle “You break my heart easily”. It swings along beautifully and the push and pull of love is nicely evoked. The pedal steel returns on the brief and enticing How Are You Getting Home, Imogen?. It’s a lovely sound and has a lyric that manfully manages to rhyme citizen and cinnamon, while strings chill slowly in the background.

The Man Who Sang Eurovision is a flute and jazz pop shuffle that gives Keiron ample chance to deploy his subtle baritone. I thought on this charming effort he sounded a little like Edwyn Collins, which is not a bad person to be compared to at all, but he maintains his individuality and unique lyrical viewpoint. A percussion and acoustic intro begins New Best Friend, which has some smart guitar stabs, some more excellent backing vocals and a real thump in the drums. It verges on Glam pop with a country pedal steel overlay and the vocal thrust comes from a calypso base, which helps it stand out.

A reading of Break by Aphrodite’s Child’s, the psych/prog band that was the 1960s home to both Vangelis and Demis Roussos, follows. Keiron expertly draws out the simmering sadness out of the song with a sparse accompaniment of piano, synth drone and pedal steel, plus his own voice used as backing vocals – effectively duetting with himself and it works really well.

Cinnamon Synthesis begins with breezy flute and piano, it’s the little touches that makes Hobby Jingo a real joy, for example the backing vocal chanting track title works wonders. A lovely musical landscape is set with drums driving it all along. The song addresses the simple hope of love conquering all the downs “I get kissed, it all gets fixed”. This is immediately tailed by a gossamer-light instrumental with a self-explanatory name, Jingo Piano, a flowing pint-sized piano workout.

What Kaiser Did is in a folk pop strum mode with a tuba holding the bottom line. This one is dramatic and theatrical, very catchy and imaginative stuff. The piano intro of After The Last Hurrah leads us into a whirling pop confection, with backing vocals echoing Keiron until the verse. “I know I should avoid you but I still…” the resignation of the song to what has happened, but the painful truth after all hope has gone, life is easier. There’s a lot of wisdom here and some nice pedal steel again too.

Sixth Form Poetry is another short one, playing on the strengths of flute and clavinet (I think?). In its brief running time it has some quite excellent lines too, including “six form poetry made a pipsqueak out of me”! A dramatic reading of Bill Fay’s Goodnight Stan brings the curtain down on Hobby Jingo, with piano and vocal only. This is a low-key ending to the LP, but also very moving and haunting.

In Hobby Jingo Keiron Phelan & Peace Signs have fashioned a great pop album full of sharp lyrics and real emotion. It is something that will appeal to fans of St Etienne, The High Llamas and Stereolab, in that it harks back to high quality pop styles of the late 1960s and early 1970s without forgetting to update them with their own particular stamp. But basically anyone who likes great tunes perfectly realised, that come complete with interesting and often funny tales, will be in heaven here. Hobby Jingo is a collection of deft skill and insight and definitely one to cherish.