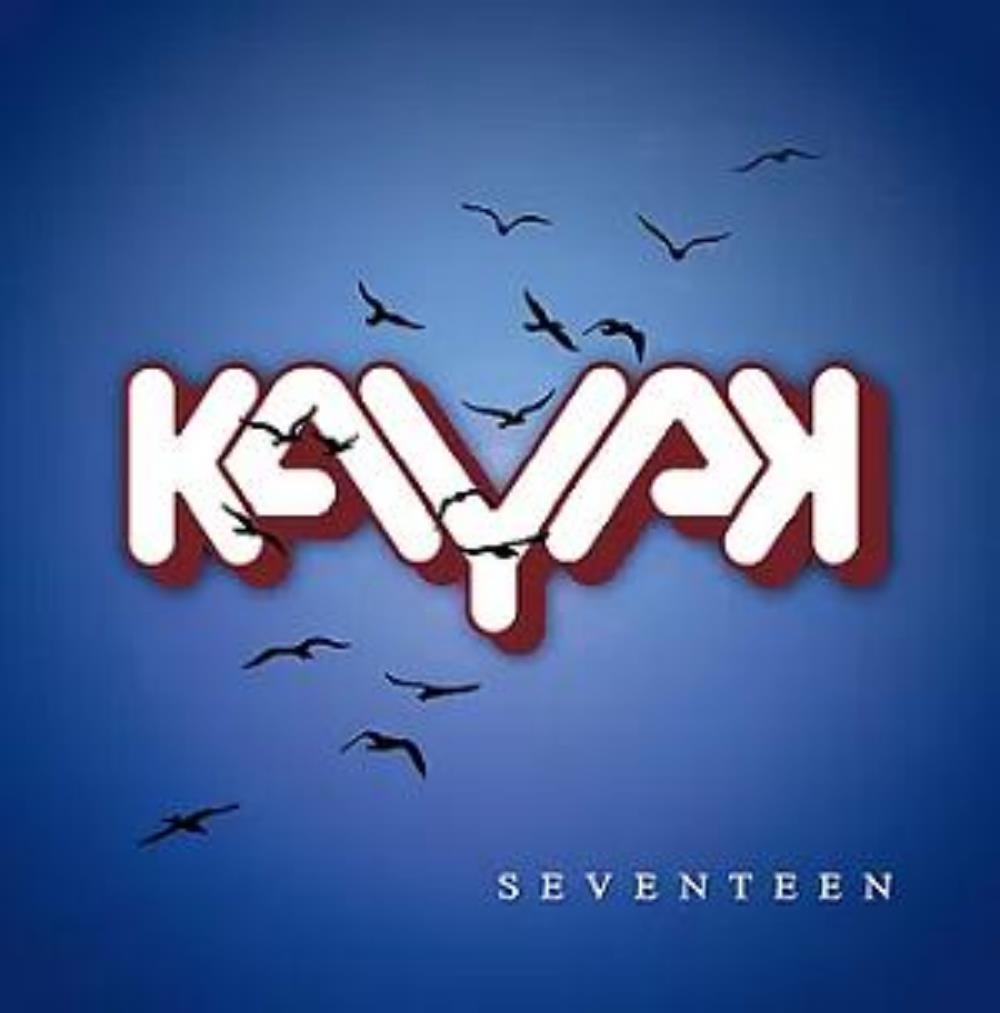 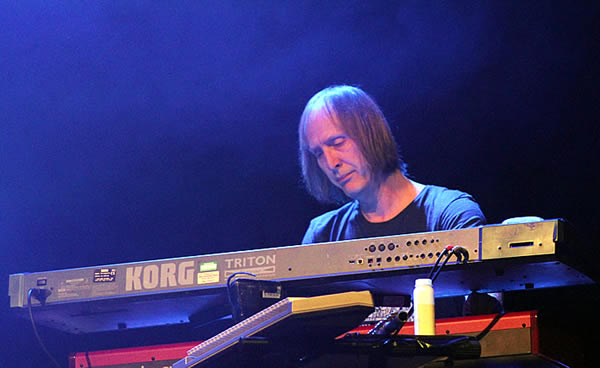 Formed in the Nethrlands back in 1972 by keyboard player Ton Scherpenzeel, progressive rock band Kayak have run a course of highs an dlows over a career that spans 45 years. After a three year break they’re back with an almost complete line up and their 17th album – Seventeen. We had the chance to chat with founder  the and one constant of the band, Ton Scherpenzeel.

LOUDER THAN WAR: First question from me is that having been active band for 45 years, I’m ashamed to say that the new album is the first of yours I’ve heard. How come you’ve managed to steer under my radar for so long?

TON SCHERPENZEEL: No idea. I’d like to say: check the other 16. Maybe there’s an answer?
But seriously, about the early period, I couldn’t say. But since 2000 we haven’t had a real record company to support us. A Dutch label, yes, but even that did not last until 2008. After that, we lost all channels for good international promotion. So we are very happy with InsideOutMusic, as it means a big change in regards to that.

LTW: It’s been quite a journey with all manner of ups and downs, but can we focus on a couple of stops on the journey.  Signing with a major label like EMI in the early days must have been a massive boost?

TS: You know, when you’re twenty and a beginner in this business, it is all just as exciting as it is ‘normal’ to get a major record company like that interested. You have no idea what you’re up against, what it takes, the sacrifices that have to be made and the chance of really becoming a success with something you started because it was your passion. That’s great when you’re twenty and naive as hell, and you sort of expect the world to like you.

TS: We always made the joke about ‘we have waited till the kids grew up and moved out’ but really we did not think about doing anything with Kayak for over fifteen years since 1981. Until Pim and I found each other again in a creative way, Max joined us in recording demos, and our former manager died. We wouldn’t have used the name while he was still alive- not that he had any rights but he was just crazy enough not to accept Kayak going on without him. All that combined made it possible, of not logical, to get Kayak going again. Still it took a couple of years before it actually happened as no major record company was really interested to begin with.

LTW: And looking back over 45 years, you must have seen a few changes in the music industry – which do you see as the biggest changes and what are the challenges in making music in 2018?

TS: In all sorts of ways I would say the transition from analog to digital made the biggest difference. Sales have gone down, but on the other hand it is much cheaper to make an album. It is difficult to make some money in the business, while on the other hand the number of acts, bands and artist that all want a piece of the cake has grown immensely. And the internet changed that all, too. In the past you would hear or read the odd review, the odd letter from a fan from abroad. Nowadays, reviews from all over the world are pouring in. It is easier to be in touch with fans. One fart in Holland and they smell it in Australia, so to speak.

The big challenge I would say is to stand out amidst that all. The only way to do that is to be yourself.

LTW: You’ve recorded a real variety of music  from rock operas to female vocalists, in hindsight, which area do you think you work best?

TS: That’s difficult. I like doing both and all of that, made my living writing for theatre, and think I have the ability to write both shorter songs as well as longer epics, or music that belongs in a certain framework and story like rock operas, the theatre-like stuff as well as intimate ballads or out-of-the-box music. The problem with rock operas is usually about the money if you want to do it properly. That’s where it always ended for us.

LTW: You seem to have been dogged with all sorts of struggles, deaths and departures but resolutely carried on – how do you feel these issues have affected the band?

TS: Sure how could it not affect you or a band. It affects you musically, financially and personally. Ultimately it lead to a band that has me as the sole survivor. Not on purpose. It’s just the way it went. Life is all about changes and Kayak is no exception. Maybe even an example.

LTW: So, after a three year break you’re back with a  new line up – can you tell us a bit about how the new members came together?

TS: We came together after I started looking for a new line up to record and perform as Kayak. That happened when I decided I would not quit yet, but wanted to continue the band as a vehicle for my music. That is the only reasons why Kayak still exists. It is my drive, my motivation. So I started looking, first of all for a singer. The vocals determine the sound of the band for like 50%, not counting the compositions of course. If I had no singer, it would not happen, so the rest came later. I looked around the usual way: internet, YouTube and asked around. I auditioned a lot of guys, but ended up with the one that I began with: Bart Schwertmann was the first one I auditioned. I could not believe I would be so lucky to have the first person I asked, so I looked further. After three months, I listened again to his auditioning which I recorded and thought: what the hell am I looking for? This is him!

LTW: And although you have these guys in the band, Kayak seems very much your band, so what sort of input do they have when it comes to recording?

TS: Not when it comes to writing, arranging and producing and so on – but they have their input as personalities.  The singer of course, as his sound is very much his own. He sings my melodies and words, has to connect to that, but only like he can. Marcel Singor on guitar, of course he plays the themes and chords as I have conceived them, but it his tone, his interpretation. Most of his solos are completely free and he his great with that, does the unexpected.
Kristoffer Gildenlöw is a magnificent bass player, but only plays one track (Cracks) as I am a bass player too and did it all while composing the tracks. I really enjoy playing the bass, even more than keyboards. So I did that but kept an important track for him open, knowing he is fantastic on fretless. Anyway, he is ten times as good a bass player than I am. Collin Leijenaar does not play on the album. I asked him first, but due to all sorts of circumstances he couldn’t do it, so I found Lean Robbemont, who is a very versatile drummer, playing in a tight but also vey loose way, little things and variations that I would never have thought off. But Collin and Kris make a great rhythm section, they’ve proven themselves together in the Neal Morse Band.

LTW: I believe the new songs that make up Seventeen came pouring out really quickly. Why do you think this happened?

TS: Because I allowed myself to be creative again, after I decided that I would not let Kayak end the way it did. If Kayak stops, it will be on my own conditions. That gave me a sense of purpose, and opened the door to creativity that had more or less closed after the disappointment of Cleopatra as a project. Not as far as the album is concerned, I am still happy with that.

LTW: About Andy Latimer’s contribution to Ripples On The Water. Did you have him in mind to actually play on that track?

TS: Yes, from the beginning I knew he would have to play it. And I am very fortunate that he wanted to do it. He is such an emotional player, recognizable like only the real great players are. He plays one note and you instantly know it is him. We have kept in touch throughout the years, also outside of Camel, always planning to do something together. For some mysterious reason it never happened. Yet.

LTW: How did the association with Inside Out come about. I know Thomas Waber has his finger on the prog pulse….?

TS: We already offered Cleopatra to InsideOut, Arjen Lucassen gave me the tip to contact Thomas. But they weren’t really into this sort of thing, maybe it was too much musical-like for their taste. When our manager Rob Palmen sent them the demos for Seventeen, Thomas said yes straight away. I can see why, it is much more of a rock band now compared to the rock opera idea of Cleopatra.

LTW: As it’s the newest, I guess you’re always enthused about new material but how do you think the new album sits with in the Kayak catalogue?

TS: Ask me that question next year, it is too fresh still and I could not say where it fits in. People say it’s the band going back to the seventies. Maybe. For me it is a logical step, yet different.

LTW: And finally – Record World in the USA made you ‘Most Promising Band of the Year’ in 1977…forty years on, have you fulfilled the promise?

TS: No. Well, depending on what the promise was, of course. If the promise was that we’d conquer the world (or the US at least) and sell many albums, it is not fulfilled. If the promise was to stay true to ourselves, and do the music we’d like to do, it was fulfilled. The combination, that was a bit hard to achieve. Often things went wrong at the wrong moment. If your singer decides he does not want to sing while a US tour is in the making, forget it. If two of your singers decide to leave while you’ve got a rock opera written with them in mind, with over two years of work in it, that does not help either. If your friend, drummer, co-producer and co-writer dies in the middle of a tour, it changes the game completely. But it’s okay. I have always been able to make a living out of my music outside Kayak. That’s something to appreciate, looking back. And it’s not over yet…