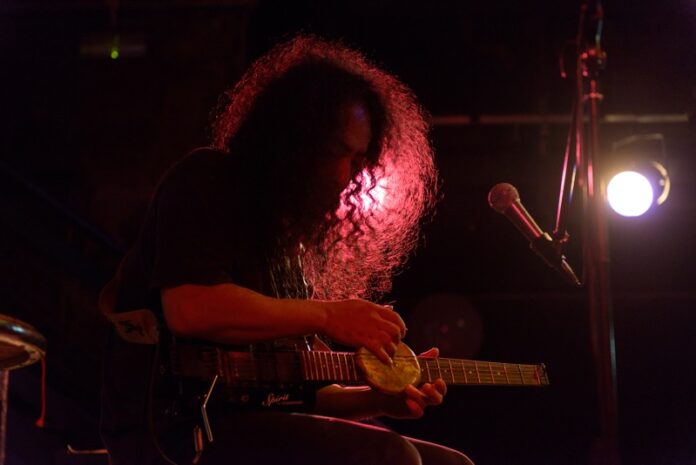 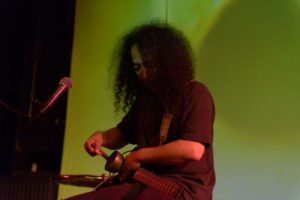 The amazing Kawabata Makoto takes us on the most intense and brilliant journey accompanied by  Dan Medicine Man Gibson on visuals, Louder Than War’s Lee Hammond was besotted and left in complete awe.

Ever since this intimate evening was announced, I’ve been getting overly excited. The opportunity to see a true great in my favourite venue in Newcastle, it was almost too much to take in. The addition of local legend Richard Dawson, left me gasping for air.

Arriving part way through Dawson’s set we settle in at the back as he serenades us with his awesomely powerful voice. Closing out with a gorgeous acapella folk song, and once again offers his punnet of strawberries out to this packed crowd. Dawson’s on stage banter is absolutely second to none you cannot help but laugh as he slips up and gets a little smutty at the end of his set.

As Dawson leaves the stage he makes way for the inimitable figure of Kawabata Makoto. Collaborating this evening with Dan Medicine Man Gibson, who has worked closely with Kawabata to put together this awesome spectacle. Taking to the stage with little fuss, he settles quickly as the visuals slowly start to swirl. 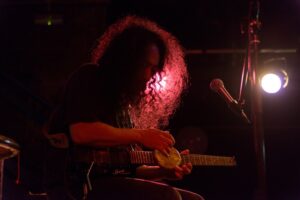 We settle in as one of the masters of psychedelic music entertains us, its trance inducing visuals begin to cut in with clips from Jess Franco films. We take a moment to cast our eyes over the crowd, looking out there’s not one person who’s not besotted by the genius on stage. Kawabata moves through a variety of implements, the set moves at a ridiculous pace.

All the while the visuals become increasingly trippy, feeling ourselves drift into a complete state of awe whilst at the same time being completely besotted by the imagery in the background. The imagery gets darker as the set moves on, the music faster and the psychedelic imagery that’s used to cut the film clips gets weirder.

By the last part of the set, the set reaches almost ear splitting volume as the girls in the films are talking in psychedelic colours, it becomes fit inducing yet there is not one person who dare to take their eyes off the stage. As the set reaches its close the music reaches a cacophonous crescendo and then all at once its gone, leaving a lone Kawabata to say his farewells and exit the stage with the minimal fuss that he entered it.

Really words cannot describe what an immense evening was had by all, this was a true spectacle that will not be repeated anytime soon.

Kawabata Makoto can be found online here: acidmothers.com/kawabata-makoto. He is also on Facebook and Soundcloud.