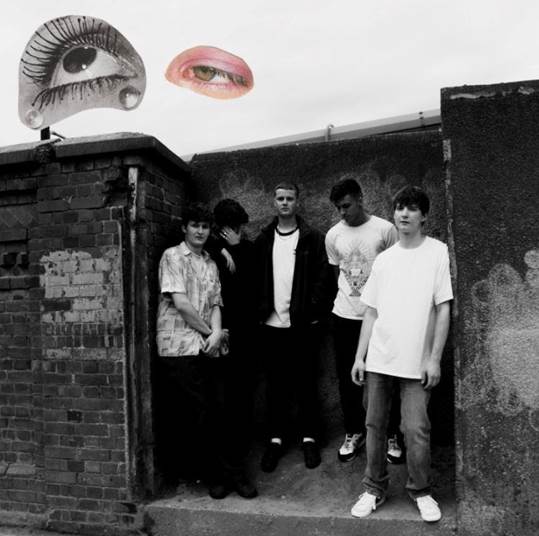 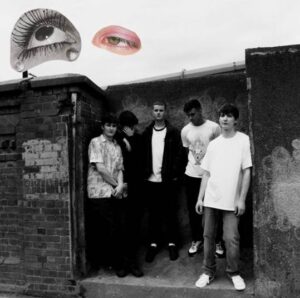 Brighton lads, Kavanagh release their new single Citizen 202. Have an exclusive first look at their new video here at Louder Than War.

Citizen 202 is a whirlwind of gargantuan distortion-heavy guitars and dizzying vocals comfortably clocking in under two minutes. Kavanagh came to life in 2016, hitting the pubs and clubs of Canterbury in Kent. Formed of 5 members and now based in Brighton, they are the epitome of unsigned, DIY Rock n Roll.

Citizen 202 is the first of a raft of releases expected this year. Recorded at Far Heath Studios with Angus Wallace of The Prodigy and Sex Pistols acclaim, and esteemed producer Mike Bennett, whose credits include The Specials, Ian Brown, The Fall and Fat White Family. Citizen 202 set to outline the next chapter in Kavanagh’s exciting development as a new and unique alternative rock band. Fast, explosive and poetic; a 2-minute self-expression of modern times… a proper hungry rock track. Watch here and read our interview below.

You are described as the ‘epitome of DIY rock n roll’, talk me through the creation process of your music video for Citizen 202,

We knew the video needed to be aggressive because it’s such a short track, so that was a good starting point. We wanted to make as much of an impact as possible, as well as expanding on some of the imagery behind the lyrics…it’s the sort of video that you want to watch two or three times, because there’s a lot going on. I really like it! Although maybe we should have put a warning up for the arachnophobes.

Your sound is very 90s alt-rock, is this a genre you are all fond of?

Absolutely! We all argue over who and what our favourite bands and genres are, but 90s alt-rock always seems to be a shared love. It’s interesting though, when we first started out as young teenagers, we wrote quite bluesy songs! We never tried to be a fashionable low-fi Indie band, and I’m really glad about that. We always wrote exactly what we felt like writing in that moment, and we’ve really settled into our sound now. There are aspects of all our individual loves…punk, old school rock and roll, metal, prog, hip hop, psychedelia…it’s a beautiful alt-rock blend.

Talk me through this movie in which your single features:

Vegan Vampires from Zorg! [laughs] yeah, I can’t wait to see the final cut! From what I’ve seen of it already, it looks to be pretty incredible! Loads of people have come together to make it happen. Melanie Williams stars in it, among a few other famous faces…there’s music from The Sex Pistols, Ian Brown, The Specials, Iggy Pop, Fat White Family, and of course….KAVANAGH. The idea behind it is really clever, and the producers are really pulling it off! I am not really allowed to say much more about it right now.

You have moved from Kent to Brighton, was this a decision for musical gain?

We LOVE the gig scene in Kent. We absolutely love it. There are some great little venues hidden all over the place in Margate, Tunbridge Wells, Canterbury…they’re everywhere! But yeah, a couple of years back we all decided to move to rent a place in Brighton and all move in together there. It was for the challenge more than anything. We had already played most places in Kent and the vast majority of little London dives, so we were really looking forward to starting afresh in a brand new city. Brand new people. Brand new sounds. A few of us also liked the look of the local Unis, so yeah it all worked out rather well!

You state that Citizen 202 is about ‘escaping the idiosyncrasies of humanity and being a member of the universe instead, simply a part of creation. more than a human’. What personal experiences have led to you wanting to write about this topic?

The world seems to be a much smaller place than it was for our parents, even since we were kids. The internet, social media, kids with mobile phones, everyone seems so self-aware and fed up with each other. That seems to be the feeling in our generation anyway. Social media has amplified everything, and opinions have almost become weapons. Citizen 202 is quite a positive song in a way, it’s about rising above all of the differences and stresses that are in our day to day lives and leaving the planet behind. We’re all just the same tiny little lifeforms in a huge galaxy floating through space, and it’s good to be reminded of that sometimes.

It has been pretty tough, but we feel sorry for the venues! So many little pubs and clubs that we used to play in are not going to be opening in 2022…and that’s really sad. I think the bands will survive; the music will thrive on it. They’ll be a bit of a renaissance of the arts after all this has settled, I’m sure of that. I just hope a lot of the independent small venues are still there to see it. We’ve been doing the same things as everyone else…going crazy, getting fat, and trying not to kill each other.

You are heading on a tour with Fat White Family soon. How did this come about?

Our producer Mike Bennett is good friends with them and has worked on a fair few of their singles. He played some of our tracks to them and they loved it! It’s as simple as that! We’re very grateful as we’re big fans and can’t wait for the tour! No dates have been finalised yet because of Covid but when it does happen it’s going to be huge!

When you recorded Citizen 202, how was it done? Was it a live, one-take recording?

We recorded it every possible way you could think of. Sideways. Upside down. Backwards. It was the first song we recorded at Far Heath in Northampton, and we got really experimental with it. The basis of what we used in the end was a one-take live track, but we’re all perfectionists so we spent quite a while layering it up in many ridiculous and boring ways. It was great fun.

What else does the future hold for Kavanagh?

The crystal ball’s pretty foggy right now but hopefully a lot of gigs! They’re the main reason we make music and we’re starting to forget what a big live crowd smell like. So that’s the main thing in our minds at the moment. A little European tour would be lovely, but I’m not sure how kind Mr Europe’s going to be to a little English rock band after Brexit. We do have a fair few fans dotted all over the place though so it would be great to get a chance to see them all! And of course, after these four singles are released that we’ve been working on with Mike Bennett and Angus Wallace, we’re going to set our sights on an album! Ideally with a big fat juicy label to back it!

All words by Jasmine Hodge. More writing by Jasmine can be found at her author’s archive. Jasmine is also on Twitter as @ObviouslyItsJaz