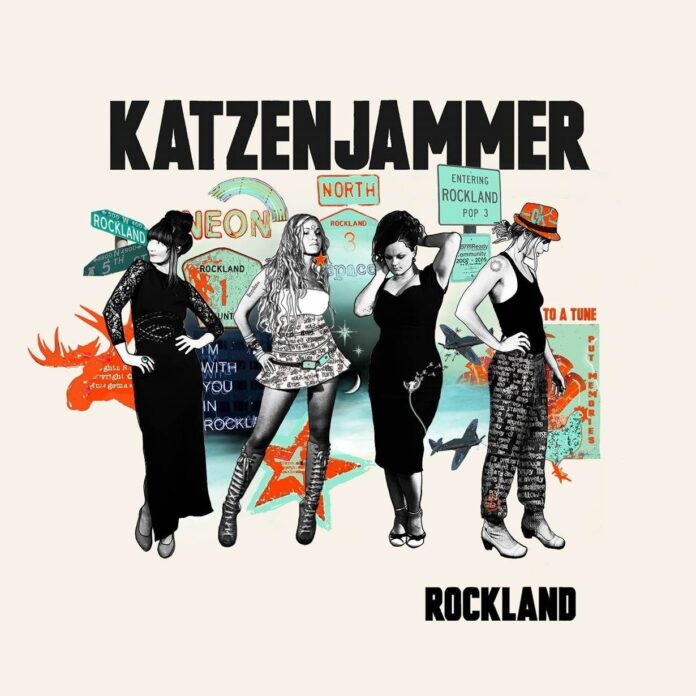 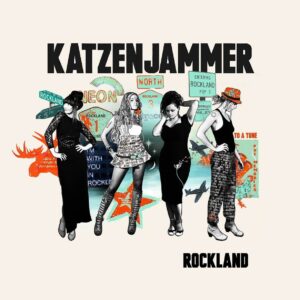 “We never follow the rules, we’ve always done what we feel like and gone with our hearts” sounds like the brash and assured sort of claim you’d associate with a metal or hard rock band – or Oasis. Not what you’d expect from four smart young Norwegian ladies who play a blend of country, folk, acoustic, blues, rock and pop using whatever instruments they can get their hands on. With Steve Lamacq’s claim that they were “the best gig of my time at Glastonbury” standing as sound a testimonial for a band as any you’ll hear, Katzenjammer bring their genre-hopping, instrument swapping originality to their third album Rockland.

Whilst their debut Le Pop from 2008 served as a record of their entertainingly creative approach and 2011’s A Kiss Before You Go (Louder Than War review here) maintained interest in the Katzenjammer journey, progressing along more symphonic lines, Rockland sees their signature sound becoming more refined. Meaning, it seems a little more stripped back, resulting from a back to the roots type of approach, allowing the songwriting to stand in a more pure form rather than tinkering too much with the original idea. Interesting.

Paring the album down to eleven songs from an initial batch of 83 gathered from various songwriting expeditions has resulted in what Solveig Heilo has said is even closer to what the girls want Katzenjammer to be. As you might expect from that starting point and from the previous two recorded outings, there’s variety aplenty as the gals switch with fleet fingered dexterity between a rustic bluegrass drenched plethora of country pop.

Produced by Victor Van Vugt of PJ Harvey and Beth Orton fame, giving the band a little more credibility in the cutting edge stakes – his influence clearest on tracks such as opener Old De Spain, the bluesy Driving After You and its rustic country blues cousin Bad Girl. The title track takes its inspiration from Allen Ginsberg’s poem Howl – all concerning the notion of being an outsider and the concept of individuality which pretty much fits in with the Katzenjammer philosophy. It may well be the sparse arrangement of the “alpha dog beta baby” rap of Oh My God which is perhaps the key track, seeing Katzenjammer at their most left field and moving on and away from their initial appeal and charm to sustain the attention and maintain the attraction.

The other side of the same coin sees the lightweight pop of My Dear with its possibly twee sounding glock/xylophone and similarly, the frankly charming Lady Grey delivering the sort of product which keeps one foot firmly in the safety of the mainstream.

While Marianne Sveen’s analogy of Katzenjammer with the Velvet Underground and Joy Division (“you don’t listen to them for technical perfection but for creation, energy and emotion” ) may namecheck the fashionably right bands, the jury may still be out on Katzenjammer. Maybe time will see this as a transitional album with Rockland seeming to almost fall between two camps – the one where their allure is in safe, clean cut and harmonious songs of mass appeal and the one which is more challenging, showing a little more of the derring do which raises its head above the surface in this record. Time will tell where their hearts lead them.

You can find Katzenjammer on the interwebs here: katzenjammer.com They are also on Facebook and tweet as @katzenjammers