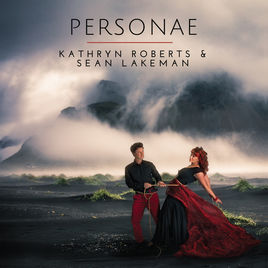 Another exquisite collection from the twice winners of the Folk Awards Best Duo and one which could easily see them lining up to bag a hat trick.

It finds Sean and Kathryn looking ever so sharply contemporary in the new promo photos and album art; maybe Esquire or Elle will be after the pair unless Hello beat them to it with an ‘at home on Dartmoor with the Lakemans’ feature first. Not that there’s ever been any doubt about the fact that Kathryn Roberts and Sean Lakeman – the latest to be tagged (maybe to their disquiet) as ‘folk royalty’- are class.

It’s an album that again sees Sean on production/recording/mixing duties as well as cutting his usual deft guitar lines, some of which sound magnificently clear and chiming this time round. At a guess there may possibly be a 12 string in the mix this time. For a duo there’s a sonic depth to Personae that belies the fact that one instrument and a voice lie at the core. The mix of songs falls more in favour with the self written sort rather than falling onto the sometimes safer folk tradition of reinterpreting trad material. Not that there’s an issue; the quality of the Roberts/Lakeman songwrting partnership is formidable and refined enough for them to strike forth boldly and simply decorate their work with takes on traditional folk material.

They’ve justifiably sneaked in a cover of Sandy Denny’s Solo, a reminder of Kathryn’s time spent taking up the Denny role with Sally Barker in Fotheringay a couple of years back and a fine tribute it is too as anyone who saw the shows will confirm. However, it’s the Child ballad, The Knight’s Ghost, given a driving roll that opens the album and shows their knack for picking some killer/chiller opening songs. Embellished by a Sam Kelly vocal, the potential tragedy is averted by the return of the said ghost in a rare folk song happy-ish ending. Not only a vibrant introduction to Personae but the start of another Roberts/Lakeman feature as regular fans may enjoy spotting some possible associations with previous work. The first of which is another stunningly effective opening sequence of songs, which are hard to let pass by without reaching for the CD scanner to re-appreciate. The Knight’s Ghost is also prime for another music video epic in the same vein as the murder ballad Child Owlet constructed by the, what must surely be imminent BAFTA Award nominated, Lakeman twins.

Independence and Solo see the spotlight firmly on Kathryn Roberts at the piano and she comes up with a shiny star performance. The former in particular could well be a close relative of A Song To Live By from the last Tomorrow Will Follow today album, from a different perspective but with a similairity in sentiment. Reaching parts that other songs can’t possibly touch in terms of scoring full marks on the clapometer of emotion drenched and touching, it contains perhaps the best ‘oh mama’ since Bohemian Rhapsody; possibly even surpassing the stupendous A Song To Live By.

In the same way that the Saved For A Rainy Day collection of songs filled a gap following their last album, surely their next output be Kathryn Roberts – The Piano Ballads. And when she steps away from the piano, the faraway and resonant vocal of Hidden People’s Huldra gets revisited in Seasons where melancholy thoughts are moulded aside sharply metallic but sparse guitar notes.

The Street Of The Cats Who Dance takes an 18th Century tale in their own words on a dramatic musical journey while the unaccompanied Boney’s Defeat appears the most folky of all, as Kathryn’s multi tracked unaccompanied voice offers a different take on something trad; the musical barometer swinging wildly between this and the music hall bounce of the cheeky The Poison Club where Kathryn channels a quirky Kate Bush and Sean gets to concoct a suitably eccentric solo. Not quite in the same league as the more obvious innuendo of The Banishing Book or The Lusty Smith from their back catalogue, it fits comfortably into their saucy song folder.

Old, Old, Old picks up a familiar animal theme; last time out it wasthe whale who was hard of hearing and now we get an insight into the psyche of Jonathan the giant tortoise in a country flavoured stroll. A potential new theme song for a remake of One Foot In The Grave? Don’t believe it… and as Metallica did with their Moth Into Flame track, they sign off by addressing the thought provoking concept of fame.

A set where the multi facetted nature of the title proves prescient, Personae is another inventive and status enhancing collection.

Listen to The Knight’s Ghost from the album here: