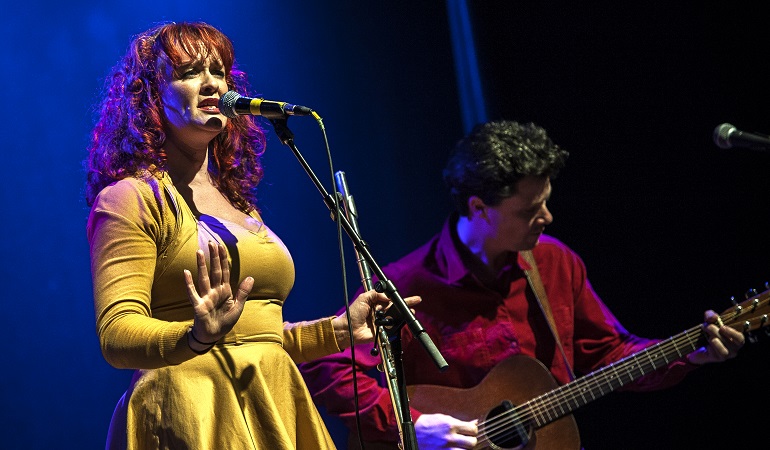 With their new album Personae (reviewed here) still working its way into the subconscious, Kathryn Roberts and Sean Lakeman have reached the stage where they’ve earned the acclaim from some quarters as ‘folk royalty’ and like Kate & the future King Bill, you can’t really fail to like them.  To add fuel to the fire, they’re currently on tour, charming and enthralling their audiences with new and old songs and a big splash of colour. We catch up with them in Bury at the end of  what the rock stars would call the first leg of the tour.

First up, tour support, a confident Sunjay and his acoustic guitar acted as curtain raiser on  proceedings with some dynamic and impressively lightning fast picking and some impressively pointed footwear. Tales of playing the role of Buddy Holly and bookings at naturist festivals peppered  a set of acoustic blues;  the sort of thing that Eric Clapton sells out the Royal Albert Hall with although you’d be unlikely to hear  EC taking up Sunjay’s  light hearted folk singers lament to Bob Dylan raised a titter. 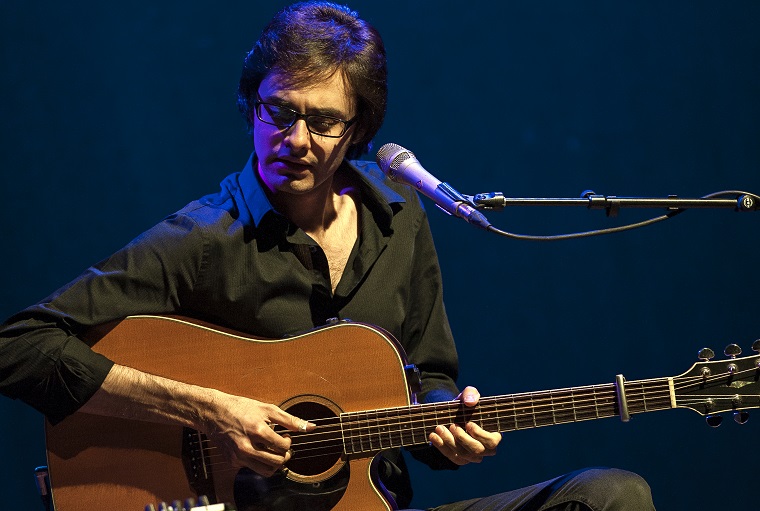 It was a quick two on one off double substitution worthy of Pep Guardiola that brought the headliners to the stage for a performance based around an agreeable mix of songs from their last couple of albums with plenty of their new and similarly sparkling Personae liberally peppered about that kicked off with an opening Tribute Of Hands with some breathy flute that inevitably conjured up some folky Tull analogies. It was the third in that came  introduced simply as  a traditional one that proved an immediate highlight. Easy to be distracted  while trying to grab a photo or two, it was a stunning performance of something that on Personae rather passes by. In fact it’s the mention of St Helena that suddenly jogs the memory banks that Boney’s Defeat recorded as an unaccompanied piece bar a touch of harmonies, suddenly becomes elevated to the early set highlight with Sean’s additional guitar and the live setting transforming the number. 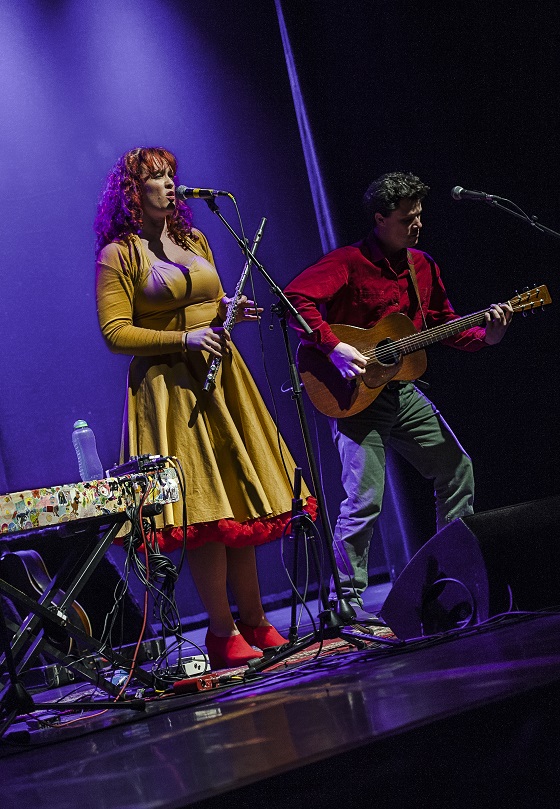 Recovered, there’s the usual friendly feel that you get with the Sean & Kath show; a chance to catch up with what’s happening round Dartmoor where things for us in the heady metropolis of Bury might seem slow paced (on a Saturday night no less – and Richard Hawley had commented on his Sat night in Bury experiences a few weeks ago). Decked out in some nifty and eye catching stage gear, echoing the shift towards a bright and bold branding in the new album and promo artwork, the set came most alive when Kathryn took to the piano for a rendition of Sandy Denny’s Solo which set against her own heart string tugger, Independence, showcased exactly why she was the go to person for the vocal role in the recent Fotheringay reimagining.

Playing folk music bingo, having ticked off the murder ballad (and no-one can possibly now listen to Child Owlet without imaging that video), knights and ghosts, death and tragedy and the protest song,  the set comes complete as Kathryn announces  a smutty one and you wonder what it could be – they do seem to have one or two  choices. Tonight it was  The Lusty Smith accompanied  a tale of the retired blacksmith who came to a gig and  bought the album  to  have the song played at his funeral.

Encoring without the traditional walk off and hope for enough applause before returning was a refreshing change to the usual façade and signing out on Lowell George’s 20 Million Things  an alternative  relaxed ode from their usual Wisdom Of Standing Still  leaving us with something calm to reflect on rather than something wild and upbeat. Although they’re a duo easily placed within the folk music genre and yes, theirs is a strongly based folk ethic, what they do musically seems to be move beyond folk and manage to attain the heights that great musicians achieve,  ignoring boundaries and , channelling finesse and authority.

You can find the Kathryn Roberts & Sean Lakeman website at : https://www.kathrynrobertsandseanlakeman.com/

November 30, 2020 1
In the end, I feel sorry for Fairytale, a song so gloriously problematic, as great works of art so often are, performed by one of the most scurrilous and seditious bands of our time, whose best shows were so completely and triumphantly out of order, they had to be seen to believed.
Read more