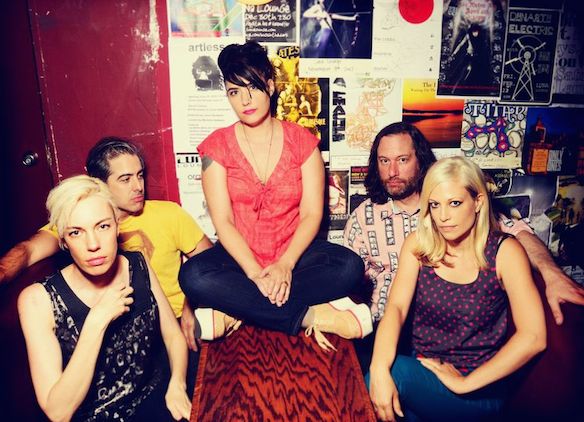 Last year we ran a review of The Julie Ruin’s (Kathleen Hanna’s latest band) debut album, Run Fast. That review has now been updated so pls check it out on this link, esp so if you’ve already seen it. TJR  have recently also dropped a new video for one of the tracks off it, real-talk love song Just My Kind, which was mixed by James Murphy and filmed in part by Hanna’s husband and former Beastie Boy Adam “Ad-Rock” Horovitz. You can check it out below along with The Julie Ruin related Record Store Day news and, excitingly, details of a short UK tour.

For this year’s Record Store Day on April the 19th TJR have a limited run 7″ single release, ‘Brightside’ / ‘In The Picture’. We’ve been told that Manchester Piccadilly Records have ordered copies and will hold a few back for online sales, plus  it will be available at most independent record shops nationwide. Both songs, which are previously unreleased, were recorded at Oscilloscope Studios during the sessions that yielded the band’s debut record, ‘Run Fast’, and were mixed by singer Kathleen Hanna. The single is limited to 2000 copies worldwide and it’s being released via The Julie Ruin Records, which is manufactured and distributed by Dischord Direct.

We also have it on good authority that there are new tunes in the making. Of the recently released album, said our reviewer, Adam Webbow, said:

“Driven by Carmine Covelli’s thundering drums, the garage-punch guitar of Sara Landeau, the dreamy bass of Kathi Wilcox and the cabaret-stab keyboards of Kenny Mellman, there’s a mighty spine for Hanna’s raw honeycomb voice to wrap around. Her singing carries the knowing anger of a laughing fighter … (Run Fast) is a journey that pinpoints the party loves and fears of an outsider generation. It pounds along with the heartbeat of a rebel soul. Catch up with ‘Run Fast’ by The Julie Ruin. Tomorrow will be brand new.”

Here are the dates of the all-too brief UK tour:

They’ll be warmly welcomed in the UK next time they pass through.

In further Kathleen Hanna news, her life is currently the subject of a documentary, ‘The Punk Singer’ (which you can read about on Louder Than War here) which is currently on tour (dates here).