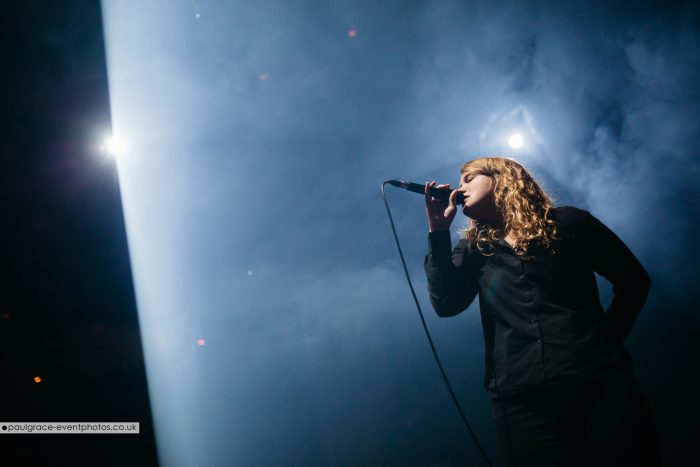 Kate Tempest’s Let Them Eat Chaos tour recently ripped through Camden with the unforgiving force of a relentless hurricane. Paul Grace donned his sou’wester and reported for Louder Than War.

Kate Tempest is a poet-rapper from Brockley in South East London and describes the suburb she grew up in as, “a shitty part of town, but in a nice house where there was always food”.

Her debut solo album was the 2014 mercury nominated Everybody Down, and this year she released the follow up, Let Them Eat Chaos, to equally rave reviews. A conceptual album depicting a snapshot in the lives of seven London neighbours all taking place at 4:18 am. Unable to sleep, the characters experience different states of anxiety; a sombre mishmash of existences drawn together by an almighty storm, and a desperate metaphorical plea for us to put down our selfie-phones and pay more attention to the global atrocities being caused by corrupt leaders of the carcinogenic capitalist system we’re born into by default.

Tonight Tempest brings her show to Camden’s Roundhouse and is in celebratory mood. Not only is it the last night of her sell-out tour but, as she takes to the stage, we’re informed that it’s her soul brother and percussionist Kwake Bass’s birthday. Deeply humble and as lovable as your best mate, she goes on to recount the story of when she used to play gigs outside Camden pubs thinking she’d hit the big time so can’t actually believe she’s now headlining a sold-out Roundhouse. Tempest announces that she will perform Let Them Eat Chaos in its entirety as this is the most honest way to convey its message.

The house lights dim and the journey starts as the tender keys of ‘Picture A Vacuum’ drift in. It’s a gentle launch which quickly descends into a growling beast however, as the story of our characters unfolds. 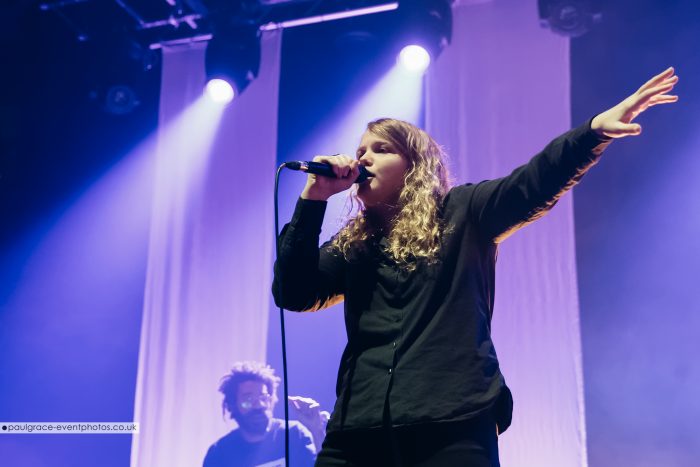 Tempest sets her scenes with poetic urban precision; “Now look here in the house opposite, black gate posts with a concrete frog squatting on top of it”. Albeit metaphorical we all know the characters in her story; they’re ourselves, our family, our mates and our neighbours. In ‘Whoops’, Pete’s excessive get-paid-get-pissed-repeat lifestyle makes the crowd laugh as many of us recognise our own traits within him.

Throughout the 60 minute tour-de-force set she moodily paces the stage while the command she has over her narrative is nothing short of breathtaking. Much of the anger she vents is directed at corrupt politicians about whom her prose contains moments of complete genius, “It’s back to the House of Lords with slapped wrists, they abduct kids and fuck the heads of dead pigs”.

The musical elements Tempest uses are minimal but allow plenty of room for her rap monologue to breathe; a subtle soundscape of deep electronica and dubstep beats that echo her influences, and there’s even a reference to Sister Sledge in ‘Grubby’ as she sings, “I’m thinking of you and the things you do to me”.

The journey twists, turns and builds to a spell-binding climax as Tempest delivers a final heartfelt cry; “I’m pleading with my loved ones to wake up and love more!”. The lights then turn onto the crowd and the room is a sea of out-stretched arms in full surrender to the destination we’ve arrived at; a spine-tingling reaction worthy of a stadium-sized rock band.

We’re left in awe as Tempest and her musicians take a bow and leave the stage (strategically there’s no encore perhaps due to risk of diluting the potency of her message). A gob-smackingly awesome show with a perfectly executed kick up the arse to encourage us to take a long hard look at politics and “the system”, but to first and foremost start with ourselves.