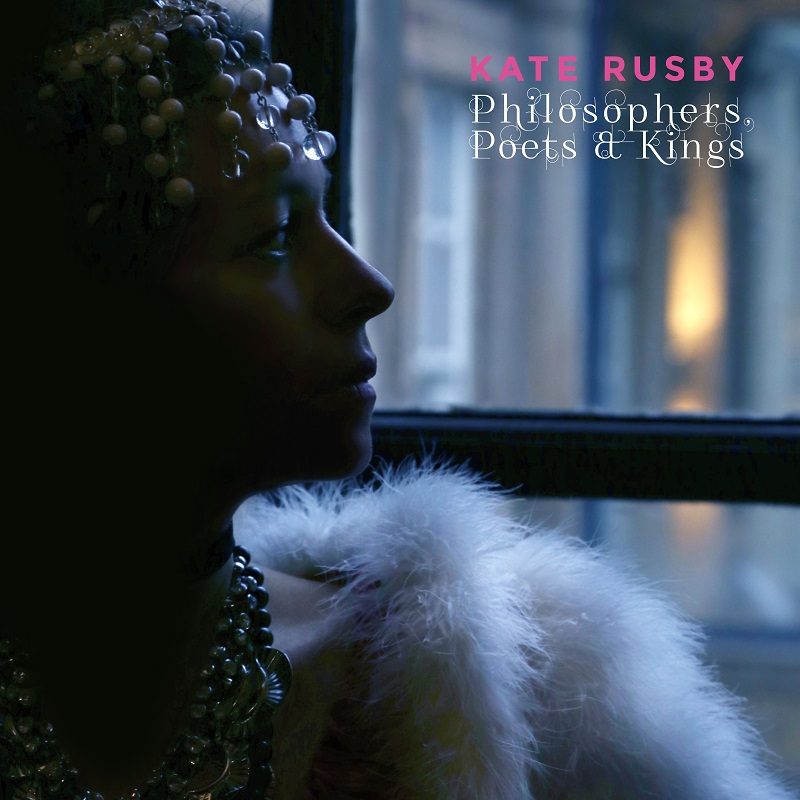 Philosophers, Poets & Kings sees Kate Rusby up to seventeen studio albums which, as she’s occasionally reminded us, is apparently more than Madonna. From the nineties and noughties into whatever we decided to clumsily call the twenty-tens that we’re well into, she spans the decades like a folk colossus.

More recently her regular albums have been interspersed with Christmas records (now totalling four) and the now traditional Christmas tours, yet Philosophers, Poets & Kings captures a snapshot of those seventeen albums and twenty-plus years as a performing and touring musician.

There’s a warm South Yorkshire comfort in reading the familiar names who provide the backup team, this time the extended studio band incorporating whistles from Mike McGoldrick and Ross Ainslie, banjo from Ron Block and the subtle percussion from Josh Clark. So what marks PPK, as it shall be known, as a record (incidentally, available from the Pure Records website as a limited edition double vinyl pressed on pink wax…) which celebrates the legacy of Kate Rusby?

First up is the presence of Damien O’Kane’s beast of an electric tenor guitar. Although he may be dying to crank out some power chords, it’s caressed with a touch so precise and sensitive that belies its potential dominance – a feature that along with Duncan Lyall’s experiments with the Moog (which make it sound like he’s a pioneering prog rocker) give a distinct flavour to the contemporary Rusby sound. Fans of Ted Hughes may recall that when the Iron Man defeats the space-bat-angel-dragon in a test of strength, he banishes the creature to fly into space and spend the rest of time singing what was called ‘the music of the spheres’. That’s exactly the sound of 2019 Kate Rusby.

Of course, there’s the bread and butter of the tried and tested traditional material and Kate adds her own tune to the title track; one that celebrates “the pleasure of wine” and a chorus that will no doubt inspire much jollity – “if it wasn’t for wine we couldn’t sing” – never a truer word spoken for those of us who need some Dutch courage to let loose.

Then there are the little gems that come in the form of the original songs.   The Squire & The Parson (developed over a number of years with dad Steve and, so we’re told, a glass of wine or two), a rustic piece led by acoustic guitar and flute. Led by more electric tenor, The Wanderer drifts like the long lost partner to Wandering Soul from 2005, but the icing on the cake comes with the exquisiteness of Until Morning which makes us all yearn for another album of original songs a la Make The Light from 2010.

Often saved for the Christmas tours, Kate’s lovely brass boys are out to good use while the choir on Halt The Wagons was something she just had to do. Having heard her backed by the Barnsley Youth Choir at 2018’s Underneath The Stars Festival, it was a prospect too good to miss; almost like an open goal with the net waiting to bulge. Accompanied by 26 children from the choir that represent the 26 children killed in the Huskar Pit disaster (it was the 180th Anniversary in 2018), there won’t be a dry eye in the house.

And if that’s not enough, then we get a pair of mid-album cover versions. Taking on a classic Dave Swarbrick/Richard Thompson song from the Fairport catalogue may have taken some balls, yet both this version of Crazy Man Michael delivered with rock solid confidence via the Josh Clark percussion and Ross Ainslie whistles plus the fact that Kate can make an Oasis song palatable are surprise highlights. Thinking aloud, it would be interesting to see what might make the shortlist for a Kate Rusby covers album; a hint maybe at what possibilities the future may hold if Damien can twist her arm. However, enjoy the warm comfort with the definitive set that is Poets, Philosophers & Kings.

Watch Jenny from the album here: