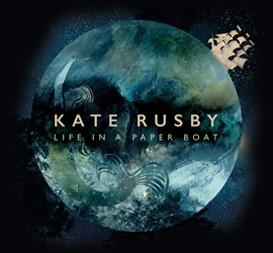 On the back of the  latest in Kate Rusby’s series  of Christmas albums at the back end of 2015 (LTW review here) comes  her new album which finds her on something of a roll following the ‘20’ career retrospective. Three albums in three years concludes with ‘Life In A Paper Boat’ finding her on the brink of her quarter century as a recording artist and  possibly the real “hero who drinks Yorkshire Tea all the time”…

And it’s those recent releases which  have seen a gentle (as well as  genteel) shift – nothing jarring, this is Kate Rusby after all, but   the journey through those two decades has seen her arrive at a musical place where a cursory glance through the credits proves quite revealing and indicative of her shifting style.

The timeless and instantly recognisable voice remains the same, yet subtle changes see a move away from the support on  the more folky of the instruments although another craftsman,  Michael McGoldrick adds some delightful whistle and there’s nothing more folky than the master of whistles making his mark on your work. A whole load of credit then to Damien O’Kane whose own musical passage has seen his rustic banjo signature also move towards  an innovative contemporary folk sheen on his recent ‘Areas Of High Traffic’. Ever onward. It’s his role as producer cum sonic architect that sees the obvious fiddle, diatonic accordion  and bouzouki vie for space with moogs, synths, pads,  programming and the increasingly influential yet understated presence of the flow of notes tumbling from Steven Iveson’s electric guitar.

There’s lots  of talk about widening the sonic goalposts, experimenting with sounds and percussive qualities to marry traditional song and style in a coating of  modern musical technology. Evolution not revolution springs to mind as fans can embrace the progression with the knowledge that  there’s also the familiar and comfortable for those who  know what they like and expect when they invest in a Kate Rusby album. The usual combination of traditional work paired with Rusby tunes and of course original songs  has ‘Benjamin Bowmaneer’ as an atmospheric  scene setter in the ‘new style’ before the delicacy of ‘Hunter Moon’ provides an early highlight and one in a more familiar Rusby template as is ‘The Ardent Shepherdess’,  a Kate Rusby song title if ever there were on,  featuring  Ron Block’s banjo (breaking news – shock,  horror – Damien O’Kane misses banjo opportunity!).  It’s also back to the usual business with the  ‘Pace Egging Song’, all  percussive notes and instantly recognisable and maybe not far off sitting comfortably in the set of one of her Christmas gigs.

Times though are more sombre and earnest. Migration is such a strong theme of the O’Kane canon, it’s hardly surprising to find it rubbing off on Kate’s work, so that the  cosy and comfortable  sit side by side with the title track inspired by desperate tales of migrants forced to seek better lives and an electric guitar/tenor guitar cascading over a hymnal narrative song of hope. ‘The Mermaid’ is all dreamy and melancholy with Dan Tyminski adding guest vocals while Archie Fisher’s  ‘The Witch Of The Westmorland’ gets  an inventive  O’Kane/Duncan Lyall backing, once again the echoing reverb ring of the electric tenor guitar provides an air of gossamer.

Bonus track ‘Big Brave Bill’ is pure Rusby. Quirky as a quirky thing and of course a chance to indulge in everything Yorkshire from the famous tea to the local estate where the Pure Records curated Underneath The Stars Festival has made its mark over the past three Summers.  Ripe for  a TV/film tie-in as well as guaranteeing Kate Rusby Yorkshire tea for life in a classy bit of product placement.  Light hearted yet shouldn’t detract from  the  delicacy and homely feel  of ‘Life In A Paper Boat’ while the wider picture providing the inspiration and touch of fragile home truths in the subject matter. An album which is graceful and mature and one which will simply add to the chronicle of Kate Rusby and English folk music.