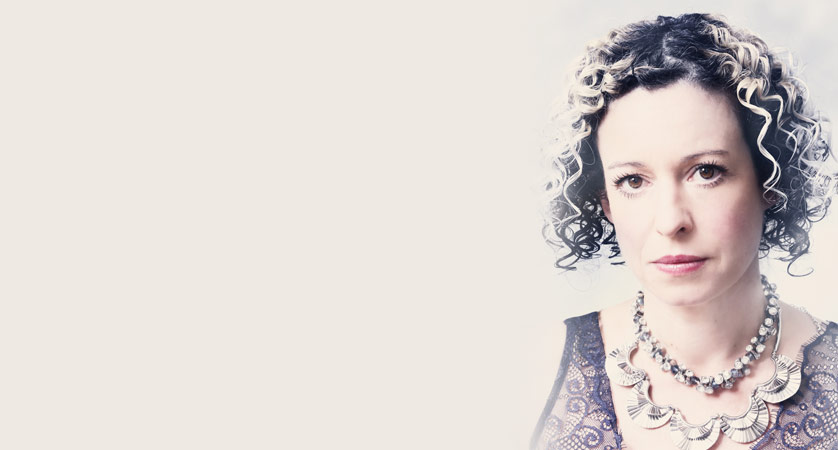 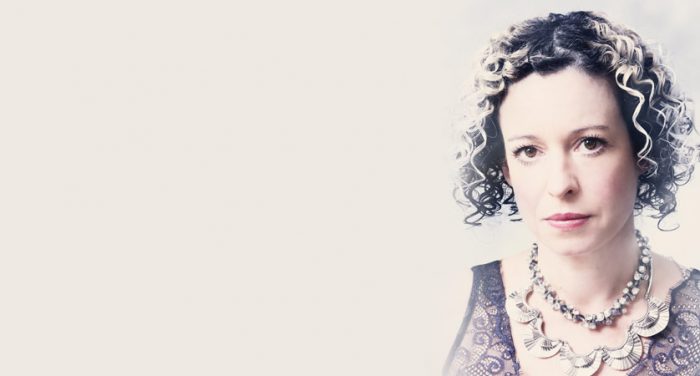 The third date of the album launch tour for Kate Rusby and her  ‘Life In A Paper Boat’ release (the Louder than War review  here),  and a first visit to Blackburn’s King George’s Hall. Its ornate concert room allows her and her wizard (as in really good, not dressed in pointy hats and capes, although hang on…) band to start to get to grips with playing the new material in a live setting in front of a partisan Lancashire audience.

And there’s a bit of an emphasis  on the new record naturally. The beauty of having your own record label is that you can always be a little more flexible in making it available   slightly ahead of official release. One reason maybe for the   healthy trade at the merch desk from an audience who’ve encountered a healthy exposure to the new songs  in the show combined with  the excitement and sheer glee that  playing a clutch of new material brings.

The new album’s swing  in musical tone is set with  the big fat sound of the moog making its presence felt from the opening ‘Benjamin Bowmaneer’ signalling the intent for a subtle variation in the instrumental backdrop playing host to the immaculate Rusby voice.  A dreamy  aura drifting into space brought back to earth by a chance for the boys to  indulge in some flatulence jibes straight from the pages of Viz comic. A chance too of course to spend an evening taking in the stories and the background  to the new material;  the musicians muse hitting at the most innocuous times…doing the ironing, daydreaming on the tour bus, mistaking supermarket signs for the moon (the moon made the album, the sign sadly didn’t).

So while the delicacy of ‘Hunter Moon’ with a trademark Rusby melody in its chorus and ‘The Mermaid’ sit side by side with something more  familiar in  the ‘Pace Egging Song’ and jaunty run throughs of  ‘I’ll Be Wise’ and ‘Only Desire What You Have’, they’re punctuated with a choice selection from the back catalogue. Handsomely backed by her  team of Damien O’Kane, Nick Cooke, Stevie Byrnes and Duncan Lyall, all players in their own right and go to guys when it comes to picking your touring band, you get  ‘Wandering Soul’, ‘Cruel’, ‘The Elfin Knight’ and ‘Awkward Annie’ providing the icing on the cake. Then there’s  ‘High On A Hill’ with Damien on his main weapon of choice, the banjo and  Stevie Byrnes joining Kate on some  harmonies – a bit like getting to do a guitar trade off with Jimi Hendrix. In fact it’s the developing O’Kane / Byrnes partnership on the flanks which is intriguing to watch as they exchange glances over their  instruments  in what’s almost a bonus to the main feature.

Making  a belated  bid to become to Kate Rusby what ‘Meet On The Ledge’ is to Fairport, is ‘Blooming Heather’. A    little overlooked gem from 2007’s  ‘Awkward Annie’ – evokes  a real sense of community and a rousing finale aside from leaving everyone glassy eyed. A sense of community which progresses into a sense of fun with ‘Big Brave Bill’ makes his encore bid for superstardom – surely the superhero story books will follow – allowing the band  to finally don the capes, minus pointy hats, but with eye masks and live the dream.

Kate Rusby finds herself on a roll with a brill new album, a round of her  seasonally festive Christmas shows to look forward to  and her impending 25th anniversary as a performer to celebrate in 2017. Queen of folk, national treasure, freeman of Barnsley, superhero capes  or whatever, Kate Rusby remains an inspirational icon.

All words and by Mike Ainscoe. You can find more of Mike’s writing on Louder Than War at his author’s archive and his website is at   www.michaelainscoephotography.co.uk