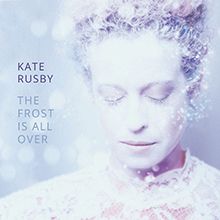 Kate Rusby: The Frost Is All Over (Pure Records)

It’s been a long wait for another (this being the third) of Kate Rusby’s albums of  traditional seasonal songs. Following  on from the delightful  ‘While Mortals Sleep’ and ‘Sweet Bells’  albums, amongst the fans, it’s been as highly anticipated as any ‘regular’ Rusby album.

Not only that, the  ‘Christmas with Kate Rusby’ gig dates are starting to become  as traditional as (insert any Christmas tradition here).  But, Kate Rusby isn’t just for Christmas. As well as being a mum, her ‘Ghost’ album of 2014 on the back of her 20th anniversary set  and touring commitments have seen her gradual recognition one of the folk establishment. The folk royal family. And one who is universally loved rather than one of those embarrassing or annoying  cousins once removed.  All of which have contributed to the long wait for her to  add to her collection of  South Yorkshire inspired carols and songs.

But she’s back and not only does she trawl Yorkshire for this collection, but also heads South to add a couple of Cornish crackers – a county with a similar tradition to Yorkshire in terms of pub carol singing. As usual she’s accompanied by her  the usual in-house band  – better the devils you know – with Damien O’Kane leading the way with arranging and production  credits, brother Joe on recording duties  and the regular live band showing they can hack it in the studio as well. Alongside Duncan Lyall, Aaron Jones  and Nick Cooke, it’s Stevie Iveson’s electric guitar which has seemed to make the most impact, bringing his contribution to the live set to the studio  – Kate has called it “a bit of grit”, but it’s not so much power chording the songs into folk metal territory, but providing more of a dash of interesting colour and flavour to the material.  Of course, it’s all topped off with a tinge of  brass arranged by Andrew Duncan, which inevitably leads us into festive mood and from the very first few seconds and the opening fanfare of ‘Bradfield’ there’s a familiar  warm feeling and you’d swear you could smell the mulled wine and feel the thrill of the nip of frost on the cheeks.

The songs in the main come from the traditional with Kate’s own or her and Damien’s arrangements or where she’s added her own tune and then there are those which get the unusual Trad and K.Rusby credit – ‘Sunny Bank’ takes the words and tune of ‘Three Ships’ and becomes embellished with some original Rusby additions. Similarly, ‘Little Bilberry’ takes ‘Hark The Herald Angels Sing’ – one which has had more than its fair share of Rusbyisms.

‘Dilly Carol’  gives Damien a chance to dig out the banjo and more obviously, ‘Cornish Wassailing’ sit like the cuckoos in the nest, but as Kate has family in Cornwall, it’s understandable that the traditions should merge in the former to create a north/south hybrid Christmas song. A similar fate befell ‘Mount Lingham’; half a tune from the carol ‘Mount Moriah’ added to the half from ‘Lyngham’ coming together as what she’s called a “happy accident”, all taking place to the tune from ‘While Shepherds Watched…’ Who’d have thought that Christmas carols could be so bewildering?  ‘Yorkshire Merry Christmas’ readdresses the geographical balance and offers up a more gentle version of ‘We Wish You A Merry Christmas’ usually belted out with gusto at nativity plays throughout the land.

There’s a tendency to skip ‘Winter Wonderland’. Despite its iconic status, and the fact that it seems sacrilegious not to like it – nothing personal Kate – it’s one of those songs which induces the marmite reaction.  On the other hand, the album closes on a tranquil and glittering high with Kate’s original song which gives the album its title – apparently originating last Christmas Day –  and a song which in a just world, should be the sort of Christmas song which a real contender for one of those Slade/Wizzard/Greg Lake filled Christmas compilations.

The songs come housed in a cover which sees Kate  mocked up all crystallised and frozen– probably shot on a scorching day in  August knowing how release schedule work, unlike Led Zep whose cover art usually delayed release. Encased in a frosted glaze – not quite the cryogenics of Walt Disney, but more ice white Snow Queen and an image which some may find unsettling, particularly in the ‘have some Turkish delight’ compelling  stare of those intensely dark  eyes on the rear of the CD booklet.

Now that’s what I call Christmas.

You can listen to ‘Winter Wonderland’ from the album: