Angels & Men, (LTW review here)  her fourth glittering collection  of seasonal songs and surely not the last, gets harvested in the annual pilgrimage to Kate Rusby at Christmas.

It’s not Christmas until the local Round Table Santa has paid a call, you’ve decked your hall and  you’ve been to see the annual Kate Rusby Christmas show. I wish it could be Christmas everyday. Not that Noddy (Holder) had Kate Rusby in mind back in 1973 when he unleashed his magnum opus on us, but it could so easily be her theme tune, or at least serve as a dash of intro  music as an alternative to the usual unassuming walk on.

Having dealt with the preliminaries, there was a concert to give. Stage centre, Kate Rusby flanked  by her band and the usual brass quintet who added  a warm glow from the blanket of sound that emerged from their instruments  of  gold.

A couple of changes were afoot with drums and percussion added to the sonic palette  from the impressively bearded Josh Clark, newest member of what Kate called “the beardy band” but once again, there was an appearance from  Ruby the Reindeer, stage right in the watchful care of Aaron Jones. Last year described as the  therapy reindeer providing stress relief on a hectic touring schedule, she’s apparently a bit the worse for wear after some sort of injury acquired in Hull…hopefully she’ll make it through the tour and take a deserved place at the home for retired reindeer.  No wonder fans were keen to grab a souvenir selfie while they still had the chance. 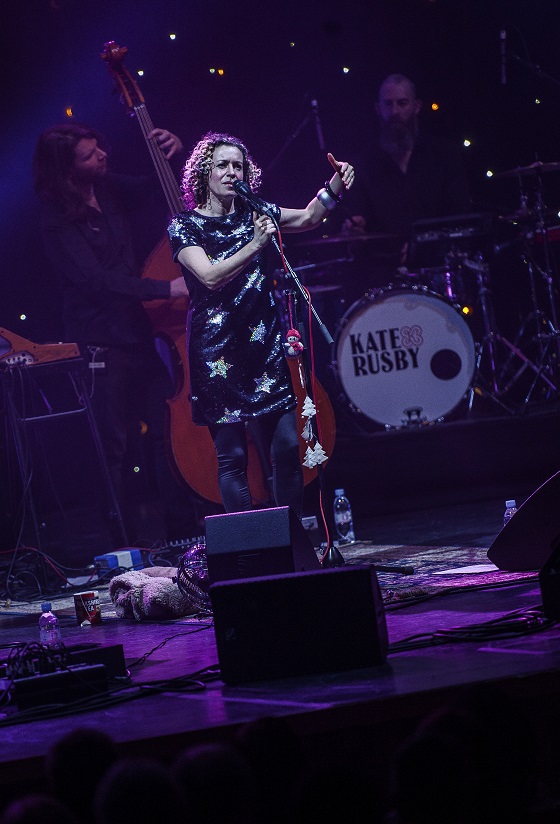 There’s also a tour joke; the one about the favourite Yorkshire key, which of course is A – or as pointed out , possibly should be B flat because that’s ‘A up’ – oh how we laughed – don’t be surprised to read it in your cracker. Music too; Let It Snow was an early hit of finger snapping cool jazz, plenty will recall the   Des O’Connor Christmas shows  with the Les Parnell show band and of course plenty of communal singing moments and opportunities for wassailing;  it is at heart, a folk gig after all. Highlights? Apart from the constant presence of illuminated snowflakes and curtains of light which saw the band performing literally underneath the stars, new songs (new versions) of See Amidst The Winter Snow and the totally ethereal  capture of Paradise  emphasised Damien O’Kanes  increasingly influential treated  tenor guitar and the shifting balance of Duncan Lyall from his usual double bass to moog/keys, starting to build up into a little bank.

An interlude of manly tunes from the boys including the brass adding their presence to a twist and turn through original tunes peppered with our Christmas favourites, is a regular feature, yet  for all the traditional and South Yorkshire carols that make up the evenings entertainment, the newest Rusby original, Let The Bells Ring, stood proud as a key moment both musically and in sentiment.

An encore which presented a nativity scene playing out before our eyes and  costumes which saw Kate in the album cover wings and halo and the band including a wise man , a shepherd, Damien not for the first time, quite at home donning a wig and Mary dress and a brass section of stars. First prize though to  Nick Cooke for bravery more than anything, in one of those sort of outfits with the false legs that attempted to make him look like he was riding a camel,  yet succeeded best as  a camel head codpiece (somewhere to rest the accordion if nothing else).  It went someway to clarifying what Jimmy Page once referred  to as ‘tight but loose’.  After ten years of Christmas gigs, the 2017 tour was spot on. Like Al Murray’s pub landlord character, Kate Rusby is on a mission to make Christmas great again. Now…how many sleeps?