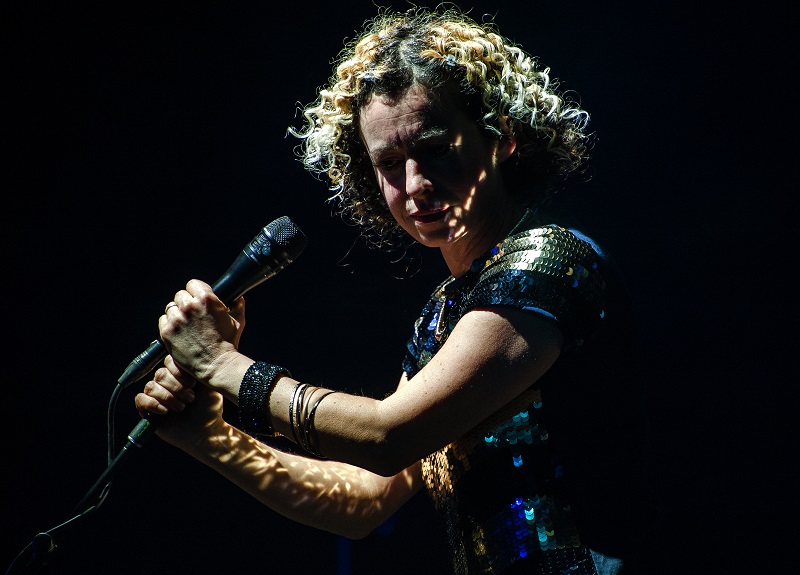 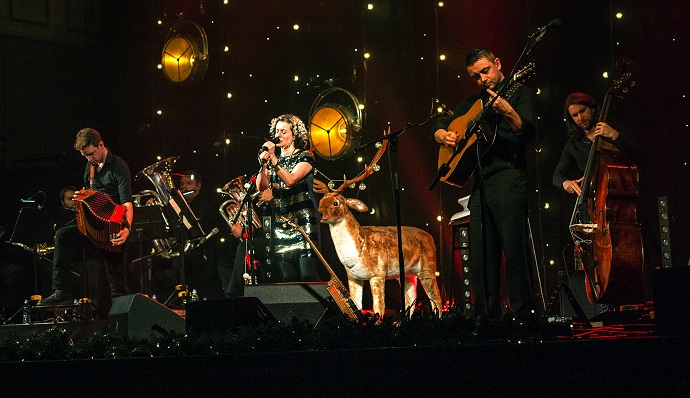 This time last year, Kate Rusby released ‘The Frost Is All Over’ (LTW review here) to complete  a trio of albums which collect seasonal songs from South Yorkshire and beyond. A year which has seen a new album ‘Life In A Paper Boat’ (once again, LTW with its finger on the pulse with a splendid review  here) and accompanying tour (naturally, reviewed by LTW – here) once again culminates in her seasonal tour.

It’s an annual event which feels like a chance to catch up with old friends and find out what’s been happening in the Kate Rusby / Damien O’Kane household over the past twelve months. Latest news is  that one of the children has played the cherished role of Mary in the local school nativity and Doris the dog is doing well, celebrating an eleventh birthday within a couple of days  the gig.  While we’re on the animal theme, there’s also the dominating stage presence of  Ruby the Reindeer – the therapy reindeer if truth be told. We all know about the therapeutic qualities of petting animals, and as Doris doesn’t tour, then Ruby is the perfect replacement. Decked out in disco mirror balls, we’re informed that she was meant to be much smaller yet the scale seems to have been misinterpreted in a Spinal Tap/Stonehenge style analogy.  Taking up the challenge to add to the rock credentials, the addition of the moog as an alternative to Duncan Lyall’s double bass is another touch which shifts the sonic spectrum and shifts the feel away from a folk gig. 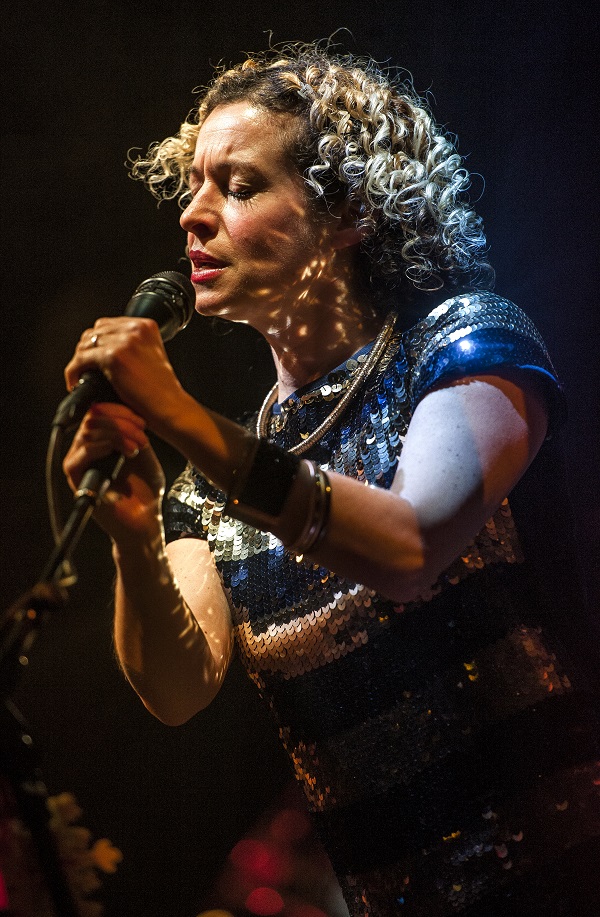 Yet the core of the evening is the celebration and  partaking of  South Yorkshire festive songs, the communal feel of audience participation strong in the air as they become  blended with tunes and words making guest appearances all over the place to form hybrid fusions of seasonal offerings from a range of cultures. ‘Sunnybank’ a classic example and then there’s the combo of the words of  ‘While Shepherds Watched…’ which goes with the tune from the  Yorkshire national anthem ‘On Ilkley Moor’  in what’s described as  a sort of  ‘circling the stomach while patting the head’ action. It’s rare that something gets played as a straight ‘carol’ as we know it. All brought to life by the usual four piece band plus a brass quintet who add either an uplifting  or melancholic  mood to proceedings and a sound crew (brother Joe) who know every nuance that needs to be picked out from the performance (a lovely vocal echo appearing briefly on ‘Sunnybank’) aside from the challenge of mixing acoustic instruments with a brass section.

Amidst the nine players all decked out in subtle black, stands Kate, the familiar two hand grip and eyes closed stance punctuated by the occasional off mic throat clearing that’s all part and parcel of a touring musician’s lot on a winter tour. Despite the regularity  and popularity   of the Christmas shows (the venue pretty close to being filled to capacity),  there’s a nod to the non-festive day job, with a couple of new songs from ‘Life In A Paper Boat’ released in October which has maintained the high profile. The second half opening with a   ‘Hunter Moon’ worked round  Damien O’Kane’s gorgeously fluid  electric tenor guitar and a gentle reminder cum chance to appreciate,  that there’s more to Kate Rusby than just Christmas and an encore of what appears to be taking on a life of its own ‘Big Brave Bill’ cue the capes and superhero masks.

2017 will see her  twenty fifth year in the business – oh yes – so a case of a year of celebration ahead  which may well culminate in the Rusby curated Underneath The Stars Festival in July, yet no doubt that we’ll be back to see  you this time next year.

All words and photography (Warrington Parr Hall and the Great British Folk Festival, Skegness) by Mike Ainscoe. You can find more of Mike’s writing on Louder Than War at his author’s archive and his website is at   www.michaelainscoephotography.co.uk