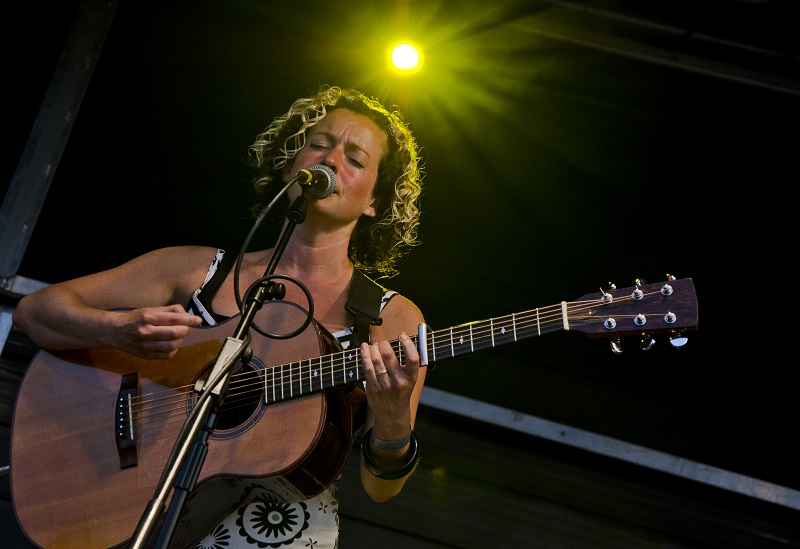 With a brand new seasonal, ie, Christmas,  album out in the stores (‘The Frost Is All Over’ – reviewed on Louder than War here), the annual event that is Kate Rusby at Christmas has been  back on tour bringing festive cheer and barely containable glee as well as a taste of real Christmas spirit to folk music fans round the country.

Interesting too that down the road at Manchester’s vastly bigger but not half as plush or sophisticated  Arena, thousands were waiting (and waiting…and waiting) for Madonna to give them their dose of festive cheer. Although at up to well over  £100 a pop for the top tickets for the all singing all dancing extravaganza that is Madonna multimedia live experience, you couldn’t have had two more contrasting events.

With the annual German markets providing an atmospheric pre-gig ambience, the closest you were going to get with Kate matching her big name contemporary was her choice of a splendidly sequinned  sparkly dress and the band suitably dressed in a uniform black (and donning Santa hats at a later stage). Treating  herself to a bit of personal  mirror balling and arriving onstage carrying the familiar tea mug (bit of product placement), which presumably actually contains tea rather than a more rock and roll tipple, the minor concession to Kate being what Damien calls  ‘the star of the show’ is that she takes the stage solo a few seconds before the band join her.

The show itself has that feel very much like the songs it presents. A community event – the usual familiar chat,  Christmas memories and anecdotes (apparently Kate is filthy after ten…….there may have been a few muffled sniggers onstage). Plenty of wassailing and not just in the song titles and just the three (all significantly different mind) versions of ‘While Shepherds Watched…’

While the technicians down the road might have been scrabbling around trying to sort the technology which runs the giant video screens, the only concession at the Bridgewater were the much less hi-tech, yet considerably more eco friendly and attractive giant crochet  snowflakes; the sort of decoration which have adorned her Underneath The Stars Festival for the past two summers. You could even buy mini versions on the merch stand.

A second half which saw ‘the boys’ getting the chance to do what Kate called their “manly” playing and let rip with a few tunes incorporating some Christmas classics and with throats lubricated by an interval dram and the inhibitions  loosened, the community spirit was in full flow. Hard to resist the temptation to join in, as you do, with the bonhomie bubbling over although not quite reaching the moments of  transcendence  when the band and audience coming together as one.  Suffice to say that there were no dissatisfied boos at the end from anyone who felt they’d been short-changed; none of what Madge termed ‘diva bitches’ in the audience, just a warm heartfelt  ovation for the eleven beaming players lined up across the front of the stage.

So as the the Rusby fans were safely making their way home on the trams to their hot chocolate and cosy slippers, maybe, just maybe as they  coasted  through Manchester’s  Victoria station  adjacent to the Arena, some may have taken  a moment to spare  a thought for those less fortunate at this time of the year, wrapped in the cosy warmth of their woolly gloves and scarves and their Rusby induced Christmas glow.

All words and live photography  (Garforth 2013) by Mike Ainscoe. You can find more of Mike’s writing on Louder Than War at his author’s archive and his website is at www.michaelainscoephotography.co.uk