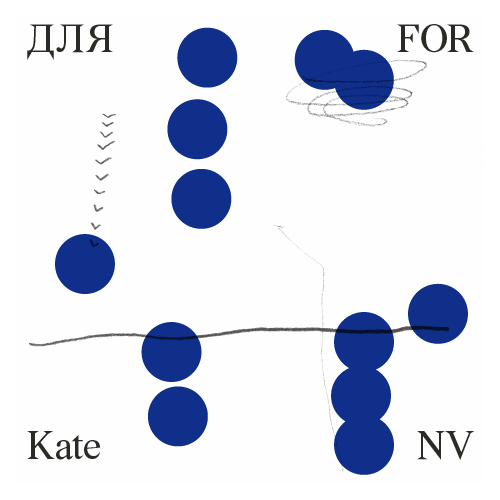 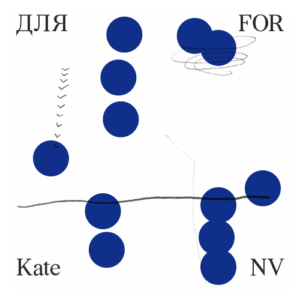 Sometimes you gain insight into the music you listen to in the most unlikely places. In this reviewer’s case it was a cursory flick through Instagram that “revealed” Kate NV’s new release is just another element of a personality that floats out through the walls of her Moscow flat through the ether; like a will-o’-the-wisp.

Instagram is the perfect medium for someone like Kate Shilonosova. She is disarmingly honest in her art, but such a medium allows her to hide in plain sight; and it seems she exploits this in her other endeavours. We see this on this new release; witness the one word titles, the one track with a vodocoded voice, singing someone else’s poem… There’s enough mystery and playfulness to push us into (over)complicated appraisals of what is going on. You can be waylaid by serious considerations such as how and where this LP was made, why she sings a Kandinsky poem to music on the track ‘YOU’, or the fact she’s on a “heavy” label like RVNG (man). But: despite the sometimes visionary talent, despite the undoubted hours of work, discipline and intuition gone into making this LP (and believe you me the PR document in support of this release could win a Nobel prize for its erudition), the experiences we get whilst lounging around to FOR are fleeting, fragmentary, dreamlike; sultry even. The artwork and track-listing reinforce this. A charmingly simple sleeve and one word titles act like the conversational fragments often to be found on Instagram, or maybe signposts to a thought bubble. What is the conversation we should have here in any case? Maybe the point that calling a track ‘DOG’ is just about something and nothing. Or about a dog.

Make no mistake: this is a primarily a pop record (as evinced by the beautiful trilling melodies of ‘BUG’, the thrilling moment of vocal reveal in ‘YOU’ in  or the melancholy of ‘SEE’). And it’s a damned romantic one at that. For all the seeming musical adventure and experiment and the (inevitable) cod-academic impulses that could support it, FOR is the sound of a sunny day; strikingly similar in tone to all her Insta story clips [sic] of planes jetting over a cloudless Moscow skyline.

For those who loved Shilonosova’s splendid electropop record Binasu, with its beautiful and bleached Man Who Fell To Earth melancholy, FOR can initially present itself as a more abstract affair. But the album is stuffed full of beautiful fragmentary music that holds your attention despite its best efforts to slip past you. Not so far removed, then, from 70s-80s Kraut heroes such as Dieter Moebius, Crammed Disc eccentrics like Hector Zazou or Japanese electronic, or performance artist oddballs like Ichi or Sam and Valley. ‘OAK’ is a clever plonkathon with the faintest of melody threads whilst ‘HOW’ and ‘ONE’ stumble giddily out from a Zuckerzeit-era Cluster session. The experience – again, just like staring at a cloudless sky in Moscow – can be made transient or given great meaning by the listener. It’s their call to add the meaning, much like many things in the fleeting, fragmented modern lives we lead.

Tesselate, obtuse, often seemingly dislocated chamber pop avant-la-lettre FOR may be, but there’s a promise of something more there, always. Like Kate NV’s Instagram account, the bits you don’t see, the run up to the event, the dreams that propel the experience (or in this case the music) are often what seem to captivate the most. The notion is addictive; as is this record.