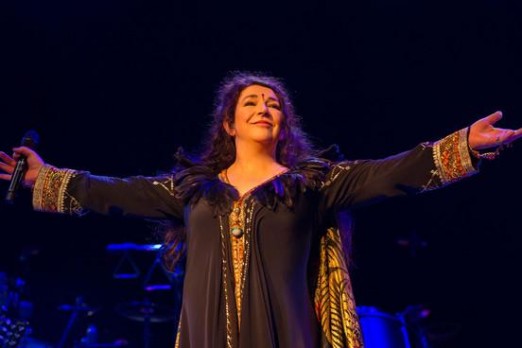 A month ago, Kate Bush began her 22 date residency at the Hammersmith Apollo, essentially coming out of her self-imposed retirement from the live stage. To everyone’s amazement, the shows have been going down a storm; while the demand for tickets was no surprise (nor the extortionate price), the actual performances and shows were. Louder Than War reviewed the first night here, but as the run winds down and reaches the end at the beginning of October, we thought we’d take another look and see how the performer was coping after such a long, intense and gruelling show after spending 35 years away from the footlights.

Well, while it would no doubt be cool and rock and roll to say that it doesn’t live up to the hype; or the mighty Kate Bush has faltered as the strain of the gigs take their toll, try as I might, I can’t bring myself to do that. The performance is pretty much flawless.

As already widely publicised, the set isn’t a normal gig as one is used to. At least after the opening salvo of six songs, anyway. This first thirty minutes has a hot and sweaty Apollo screaming and on their feet in adulation. It’s still hard to believe that the legendary Kate Bush is there on stage in front of us. Second song in, and the band are almost drowned out by the cheers. The classic line from the 1957 horror film, Night of the Demon – “It’s in the trees… it’s coming!” heralds one of the only hits that will be performed as part of this show. 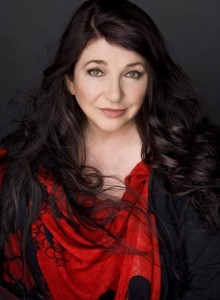 In fact, it’s the album from which the title track comes, The Hounds of Love, which dominates the first act of the show. After the aforementioned six song set (which also includes a stunning rendition of Running Up That Hill), the show becomes a performance piece as the whole of the second side of the Hounds album is played. The concept suite, known as The Ninth Wave, received mixed critical reception when the album was released in 1985. Performed live, with actors and dancers embellishing the story and adding a dramatic flavour, the story of a woman adrift at sea becomes a powerful, emotional and utterly engrossing and mesmerising experience.

It’s a bold thing to attempt, particularly as the majority of the people who snapped up the tickets were no doubt expecting an evening of Babushka andWutheringHeights. The show has become a stage play; fish people dance about while actors play the story elements – both on the elaborate stage set and on the projected filmed sections. Trap doors appear in the stage, from which the drowning Bush appears briefly, and billowing sheets transport us out to sea too. A spectacular lighting rig helicopter has the audience entranced. Sound effects come from all corners of the hall making it a fully immersive surround experience. It shouldn’t work; but it does. It’s fascinatingly enthralling, and more akin to legitimate theatre in the way it pulls the audience in. To attempt this kind of performance as a comeback show is a risky and bold undertaking, but Ms Bush isn’t finished yet.

Act 2 takes the form of a similarly theatrical run through of the second side of the 2005 album, Aerial. A Sky Of Honey tells a story of a painter (Bush’s son, Bertie – who also gets a solo vocal spot on the sole new song of the set, Tawny Moon) and the inspiration of nature, the beauty of the world around us. A War Horse style theatrical flourish with a puppet being walked around the stage; evoking emotion with the carefully manoeuvred wooden boy. A wonderful moment which takes the whole audience by surprise (and once again proves Kate’s love of horror films) brings to mind the climax of the ventriloquist story in the Ealing classic Dead of Night.

There  isn’t a disappointed soul in the whole building as the set ends with the elegant Bush flapping her arm – now transformed into a large blackbird’s wing – while tree trunks drop down from the lighting rig, one crashing straight through the chanteuse’s grand piano. It still sounds fine, though as the encore features a solo rendition of Among Angels. But then it’s time to close out the show with a staggeringly good Cloudbusting. It must be said, the band Kate has surrounded herself with for these shows are superb. The music is faultless, as powerful as the lyrics she sings.

Kate seems genuinely overwhelmed by the response the shows have been getting. 35 years after she last played the venue – then known as the Odeon – a lot has changed. Fashions have changed; technology has changed; the lady in question has changed. Anyone who has seen the videos of those 1979 shows will know that Kate was always about performance art and dance. These days, she may not prance about the stage in a leotard doing yoga-esque moves, but she still has a great deal of grace, poise and style. Her voice may have lost the shrillness of youth, but that’s not necessarily a bad thing. She’s still note perfect, and it’s clear that she has a natural talent; in both vocal styling and songwriting. She doesn’t need to do cartwheels nor bid you in through her window-ow-ow.

As this series of shows comes to an end, it seems Kate has got used to being front of an audience again. But where does this leave her? She could undoubtedly take this show on the road and fill enormo-dome arenas for £100+ a pop. However, that would take something away from what made these shows so special. Coming away from the show, one feels that Ms Bush has laid a bit of her soul to bear on that stage each night. Those who were lucky enough to see it experienced something special. Dare I say it, but by bucking the hits train – which would have no doubt garnered even more praise (and ticket money) Kate Bush actually put herself in the running for punk of the year. Because it has nothing to with the style of music – never has – but more about attitude. And the Before the Dawn shows were as revolutionary as they come for modern pop shows.

All words by Martin Unsworth. More of Martin’s work can be found in his Louder Than War archive.