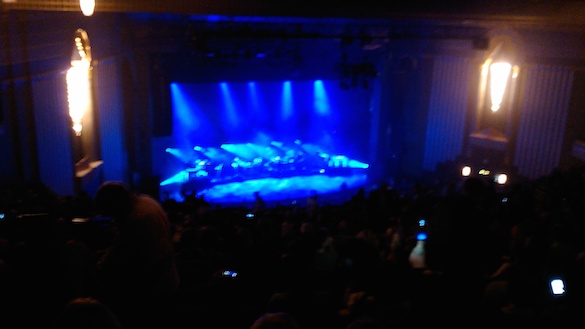 The view from the back just before Kate Bush took to the stage.

At 7:45 this evening at Hammersmith Apollo, London, Kate Bush took to the stage for her first show in 35 years. Our man Dave Jennings was there. He was joined in the audience by some of the leading lights in the world of music over the last few years; Grace Jones, Madonna and Bjork were all present amongst others. Read on for Dave’s full report.

So, the moment that few genuinely expected has arrived. Kate Bush, one of the most innovative and enigmatic artists in modern music has chosen to return to the stage at Hammersmith Apollo (or Odeon as many still call it). We don’t know why now or why here, although in a very rare public statement last week, Bush said she had chosen the venue for its intimate atmosphere so she could ‘have contact’ with the audience. A live comeback that no one could predict.

There’s no doubt that Kate Bush need only have clicked her fingers and promoters would have come running from near and far, armed with stadiums and arenas and astronomical balance sheets. However Hammersmith, scene of her last live appearance thirty five years ago, it is and she is returning to a vastly different live scene which, at the highest level that these shows are at, has a gargantuan appetite for ‘events’. It is also voracious in desire for profits and as long as demand keeps fuelling the ‘secondary ticketing agencies’ (for want of a better phrase) then we will hear stories of the mind-boggling online prices being paid for tickets for these comeback shows. The desire to perform in a theatre was clearly an essential part of the comeback decision, (and a hugely commendable one) and it’s a shame that the publicity about the re-sale prices being paid has slightly obscured the gesture here. 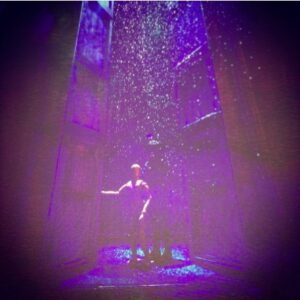 (Photo right, cover of official program) In May 1979, when Kate Bush previously played live, Bright Eyes by Art Garfunkel was Number One and the charts also included Boney M, Wings, Supertramp, Racey alongside Jimmy Jimmy by The Undertones and Cool For Cats by Squeeze. Clearly that was a long time ago but her reputation has hardly suffered by her absence from the stage. Kate Bush stood apart from other chart acts at the time (and the charts were not dominated by punk and new wave) and has done ever since. She has never swum in the mainstream, preferring to paddle her unique track through some of the most fascinating uncharted waters in modern music. Put simply she has what most artists must crave; freedom to create what she wants at a time she chooses and the adulation of musicians across all genres.

However, it all comes down to tonight in this legendary venue in  London, so integral to many passing moments in the history of rock. Kate Bush has had nothing to prove for many years and her legacy is as solid as the Tower of London. But tonight, as the house lights dim and she steps back onstage for the first time since Margaret Thatcher first entered Downing Street, the pressure must be colossal. How many of those critics awaiting her appearance would themselves scuttle down the Odeon staircase as The Beatles famously did in A Hard Day’s Night if faced with a similar scenario? It all comes down to this moment, a legend testing herself in the crucible of the live stage for reasons we will possibly never know, making an entrance to an ear splitting roar that couldn’t have been exceeded if her fellow immortals The Beatles had walked out onstage.

A black-clad Kate Bush appeared leading her chorus to an ovation like I’ve not seen or heard before and kicked off with Lily. As she did all round the theatre people leapt to their feet spontaneously.The first song was followed by a standing ovation from the whole house before the room is filled by the immortal words ‘It’s in the trees, it’s coming’ and we’re straight into the pounding, unnerving brilliance of Hounds of Love.

Such a long time from the stage has led many to speculate about her voice but two songs in it’s clear that we still have the premier female vocalist and this was one reason why each song was greeted in the same way, with a standing ovation. Top of The City was followed by Aerial’s sensual beauty of Joanie and the whole experience was like a religious revival, a west end blockbuster opera and a rock show as one. Bush paused briefly to thank Mark Henderson for his work on the amazing lighting effects and also her son Bertie who was part of the chorus but destined to play a greater role. Running Up That Hill was greeted in the way that one of the all-time classics should be but some were starting to wonder if maybe she was going to play it straight, so to speak, just relying on delivering brilliant vocals, with a hand-held mic in front of a perfect band. How utterly wrong that impression was to be. As King of the Mountain ended percussionist Omar Hakim moved to centre stage and created a vortex of noise that led to a blacked out stage.

It was at this point that the evening moved from being a highly impressive comeback gig that silenced any potential critics, to being perhaps one of the most visually spectacular and sonically perfect events in live popular music. Never one to be overly swayed by stage effects, it was possible only to marvel as Kate Bush and her production team brought the products of her unique imagination to life. A video of a desperate message regarding a sinking ship is followed by a film of Bush adrift in life jacket as the whole of the Ninth Wave Suite is performed. This included the stage being transformed into a nightmare sea-bed scene where ‘fish people’ take the ‘drowning’ singer into the crowd and a brilliantly created ‘helicopter’ searches across the auditorium for her. The whole effect was an utter triumph. It was truly awe-inspiring and everyone was in need of the interval. 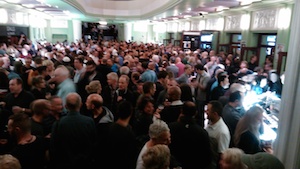 Kate went offstage at this point to huge ovations and the interval started with people walking around like they were shell shocked – but not so much they couldn’t flood the merch stands! They were set to be astounded by the second half.

A new stage set and the performance of the whole of A sky of Honey from 2005’s legendary Aerial set whole new levels of visual and sonic impact. With son Bertie cast as an artist and a stage set that incorporated a vast ‘canvas-like’ screen, and a puppeteer moving a small figure around the stage the impact was literally stunning. The colours of the sky that decorated the stage and backdrop would really have to be seen to be fully appreciated as Bush takes us through her vision of a ‘lovely afternoon’. Figures drift across the stage as if an old master was being brought to life here in Hammersmith. It was utterly brilliant. The power of the drums, which Kate Bush feels is so integral to her music give the songs of Aerial a driving impact live and, combined with the effects produced a sequence of live music it may not be possible to better. The set ends with her band in bird masks as Bush, complete with blackbird wing is suddenly and spectacularly lifted into mid-air.

Speculation that she could not follow that was proved wrong as she returned alone to perform the tender beauty of Among Angels from the legendary 50 Words For Snow. The band return to deliver a celebratory Cloudbusting that again sees the whole house standing. Kate Bush seems genuinely moved by the ovations but they probably cannot get near to showing the appreciation the crowd felt for this most amazing of shows.

When all is considered, and her legacy and influence is included, any risk there may have been in returning to the stage has been smashed to pieces. Thirty five years away from the stage and she delivers a performance of such jaw-dropping brilliance. One day the true importance of what she has done will sink in but for now, if you have tickets to see this legendary artist, you are in for an amazing performance.

Kate Bush was joined onstage by:

A Sky of Honey: