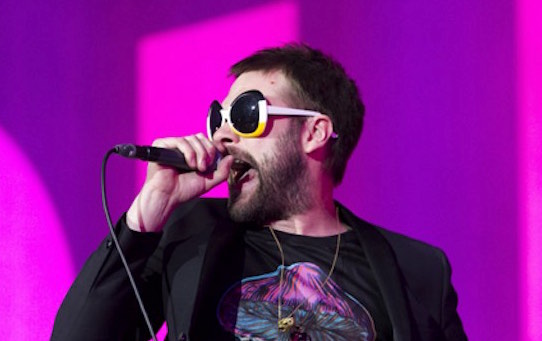 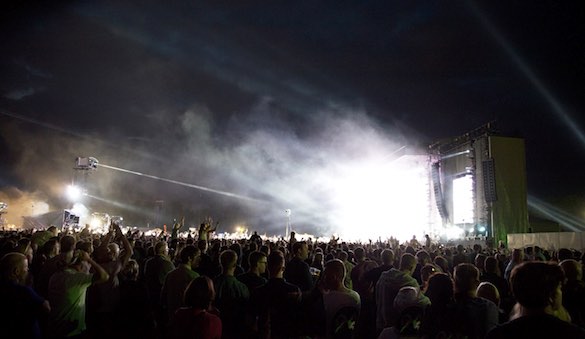 Kasabian took the stage at Victoria Park, Leicester last weekend and by all accounts blew the place to pieces. We have words and photos from this truly unique event, one which our reviewer, Harley Cassidy, describes as having “…a ‘one off’ kind of feeling that is rare to find at gigs anymore…” A twenty strong gallery also accompanies this review © Hayley Taylor.

Everyone loves a huge outdoor gig. It’s become a blown up spectacle worthy of a Facebook event to rally the crew along and make a day of it. Tonight is Kasabian’s turn, a band more than worthy of gracing an open air experience for the masses. Riding on a wave of mostly critically acclaimed albums, anthemic tunes and character, the buzz for Victoria Park is palpable if not dampened by the expectations that were resting on the support acts to elevate it higher. Twitter newsfeeds were filled with diasppointment and disbelief at Kasabian’s choice of artists, so it didn’t take a genius to see how most of them would be received tonight.

Zane Lowe isn’t exactly warmly received. Playing a far from innovative DJ set that could have tuned into the Kasabian demographic more, he chooses to play songs like House Of Pain’s Jump Around, Chase and Status, Kanye West and, sigh, Wonderwall. You start to feel even a little bit sorry for Lowe as he desperately tells the crowd, “I like Kasabian just as much as you guys!”.   Jagwar Ma follow, a more understandable and accepted support slot than the others, their baggy sound drifting lazily through the throngs of people that are now queueing for more alcohol. The band are pretty much ignored, which is a shame because Jagwar Ma have a great album to rest their set list on, but Victoria Park is far too big a venue for their more intimate Madchester leaning sounds, which is surprising, as The Throw verges on something quite anthemic. 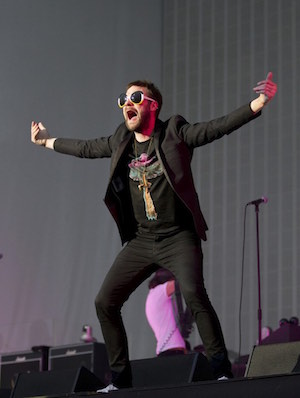 Rudimental play a DJ set which sees more people at the bar than the stage, cementing a fact that everyone could have agreed on – the support slots could have been better. However, with all the animosity out of the way, there’s not much time left before Kasabian make their appearance.

With 40 minutes to go the screen erupts with a pink glow and large, white numbers simulating a countdown appear, leaving the crowd more intent on their place than ever. There’s enough exuberance to go around by the time Kasabian reach their port of call and as the static buzz of Shiva accelerates around the park, the band stride on, smiles to the sky. It’s all nice as pie until the drum of Bumblebee drops and if you thought standing on your feet was a possibility at this gig then, quite frankly, you were wrong. All predictions of this song being incredible live both sonically and atmospherically are pretty spot on. Tom’s gusto fuelled chant approach sounds incredible, reaching every corner of the park and magnifying in the eardrums, as Serge’s catcalling comes in handy when it comes to keeping pace. It’s controlled chaos personified.

Kasabian really have chosen the cream of the crop from their albums when it comes to the set list. As Bumblebee finishes, Shoot The Runner’s glam rock groove churns out as Tom spits every lyric vehemently, Underdog propels the audience to new heights whilst the muted, dirty riff of Fast Fuse whips the crowd into a reverie. Kasabian’s music has the ability of reaching out to more than one type of audience, mirrored by the consortium of characters at today’s parade. The lads are out in full force tonight, with no remorse for anyone around them. They’ve come to see Kasabian in the flesh and grab a hold of 48:13s live experience, leaving it hard to sift through the Pretty Green logo, but there’s a huge array of people out to see them; loved up couples, families, hedonistic teens, middle-aged men in bucket hats and even people who look like they should have left when Rudimental finished, proving that Kasabian are officially the people’s band. They’ve managed to do that wonderful thing that so many bands with a more refined sound struggle to do; break the charts and appeal to the mainstream. 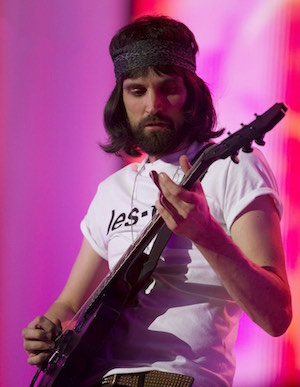 Some have said Victoria Park is a homecoming show, which in essence it is; but really, there’s so much diversity and expectation and excitement from all corners of the UK and beyond, that it feels on par with something much bigger. Of course, Kasabian can only praise Leicester and its inhabitants and that seems to be naturally accepted from everyone there. Serge’s relentless bouncing around the stage whilst wearing a t-shirt emblazoned with the words “les-tah” and Tom’s open arms stance to the crowd for every single song proves that the band have a huge pride at playing in this very ground. For a band so cocksure, they seem humbled, with Serge even making a comment on the burger vans – “are they for us?!”

Who could ever question that Kasabian weren’t fit to headline Glastonbury? They make Victoria Park look and feel like an intimate gig as every song glows and spreads throughout the place. Songs that would be dubbed “anthemic”. Songs that keep the whole set afloat propelled by sheer force and passion. Kasabian have a knack for crafting something that generates into pure elation. The encore lies testament to this as Switchblade Smiles rings out to chants of “CAN YOU FEEL IT COMING?” before a squelching synth thrall of Vlad The Impaler and then Tom takes to the mic: “Let me just say something a minute”, he laughs as shouts and cheers dethrone his spoken ode. “We started way back in 1997, me, Serge and Chris, and we just want to say thankyou for all your support. Ten years ago we were playing shitholes and now we’re here, with you lot”. Cue rapturous applause and an enormous sense of personal well-being before the downbeat intro of Praise You melodises the air leading to a somewhat flattened cover that’s masked in a whole lot of spirit.

The final song of the night, LSF, brings the house down. More so than Club Foot or Fire or any other of Kasabian’s tunes that have graced FIFA and / or Pro-Evolution Soccer 5. LSF has always been one of Kasabian’s strongest songs; Tom’s voice demands attention and the pure euphoric cry of the chorus still rings in everyone’s ears long after Kasabian are finished. Then it’s all over; Serge rips his top off and dives into the crowd as only Serge can, Tom stands back in amazement, drinking the whole scene in and a figure from stage right, Chris Edwards, the bassist, the guy who’s been there from day one, steps forward; “I never get a chance on the mic! Leicester, you’ve made my fucking year”, he exclaims before the band bow out.

So, as everyone filters out, drenched in sweat, booze and a heady grin, it’s fair to say that Kasabian exceeded all expectations for the night. It’s a truly ‘one off’ kind of feeling that is rare to feel at gigs anymore, but one where you leave with a buzz and a shared smugness and contentment with the rest of the revelers, knowing that you just witnessed something truly special.

A photo gallery can be found below:

all photos are © Hayley Taylor who shoots under the name “Shot By Hayley”. Her website can be found here: shotbyhayley.co.uk.

All words, meanwhile, are by Harley Cassidy. More writing by Harley on Louder Than War can be found in her author’s archive.