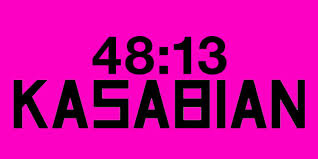 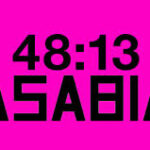 It’s all change at the top.

Suddenly the biggest band in the UK is the best band in the UK. Only this time they are far smarter than they let on and their music is groundbreaking in a way that no-one dares to admit with anthems that have an undertow of atmospheres and sounds that combine rock n roll with electrnic freak beats and soundscapes that they sneak in.

Kasabain are an odd band.

They emerged from the school of Manchester- not geographically but musically- with all the attendant swagger and baggoid musical parameters but were actually from Leicester, they have become the biggest band in the UK without anyone really noticing, they act like oafs but make deeply intelligent and imaginative music, they may have emerged from the school of too cool for school Liam Gallagher ‘stillism’ stage craft but have emerged as Prodigy style showbiz lunatics with a mental stage show to match.

Oh, and they are currently at the top of their game with their new album 48.13 breaking musical barriers and being one of the best albums this year with a groundbreaking soupçon of swagger indie and electronics somehow mashed together into a huge pop record that manages to combine pop brilliance with a dark and uncertain undertow.

50 000 people are hear to pay homage to the biggest bands to come out of Leicester since Showadywady or Englebert Humperdinck (!) and it’s a triumphant show of strength for the band who emerge blinking on to the stage not quite believing it themselves as frontman Tom Meighan explains witha bellow, ‘You’ve made my year, unbelievable.’

They kicked off with new album 48:13 opener Bumblebee- an electronic krush of noise that is cranked to maximum thrill live- pop music as pure noise and proof to the tired and conservative ears of mainstream media that is possible to push the sonic envelope far away from jangly guitars and the tired old approved lineage of rock and get away with it. Kasabian world is one where dance and electronics are up there with the classics, a palce where House Of Pain are in the lineage as wella s the usual mob.

The set was built round the new album but they didn’t forget their legacy with powerful run throughs of Shoot The Runner from their 2006 album Empire and Underdog, from their previous landmark release West Ryder Pauper Lunatic Asylum.

We say previously because the new album is their Sgt Peppers moment- the risk taking break that unnerved fans but has swiftly been adopted as a key release as it colours the  year pink. The key to Kasabian is their love of of Oasis style swagger anthems but also their deep understanding of electronic and dance and further into avante garde and experimental. They may talk daft but they have an innate genius and deep understanding of music that seems them pull off musical risk after risk and take the weird into the mainstream and bring the noise to the masses bypassing the comfortable metropolitan knitting circle tut-tutting of the middle aged music media and they are doing it on their own terms- that’s genius.

The band were padded out with and string and brass sections and backing singers creating the big noise and soundscapes for  many of the songs songs in the 20-track set.  There were so many highlights it was like an avalanche of thrills – with each song sounding very different- from ‘Fast Fuse’ sounding monumental, whilst Processed Beats quoted  the intro from House Of Pain’s classic yob hop anthem Jump Around, Take Aim frrom West Pauper… was celebratory and the encores were explosive, with the band returning to the stage with Switchblade Smiles from dinasaur power album, Velociraptor! and the much love classic  Vlad The Impaler.

Before a quick cover of Fatboy Slim’s Praise You, which merged into the set ending finale of   L.S.F’ which ended with the band cranked to electric anarchy with Pizzorno shirtless diving into the crowd whilst Meighan thundered out the vocal line.

Kasabian are a victory for British music and tonight was a celebration of innovation and great songs and the people’s music setting the pace.