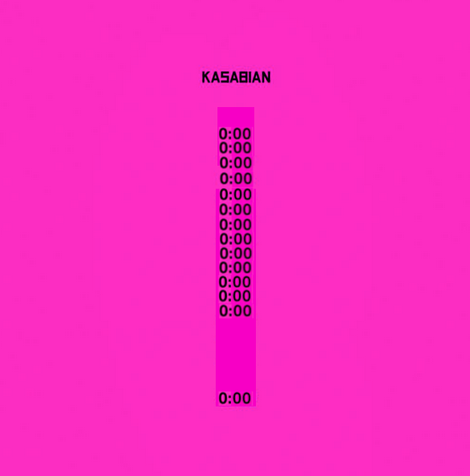 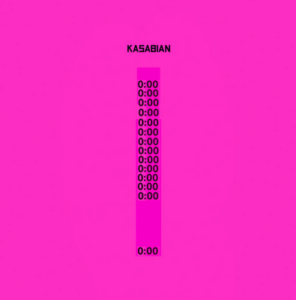 Kasabian are one of those bands that split opinion and that always makes a band interesting.

Their gobshite interviews mask an inventive songwriting skill and their music is far more than the lumpy gravy of the fag end of lad rock and more of a diverse and fascinating mix of electronics, soundscapes and sometimes film soundtrack atmospherics as wells for a knack of creating anthems that twist and turn on their own terms. They are are actually a far more inventive group than they have to be and their music takes some daring journeys that seems to confound and then hypnotise their fans before bringing them back into the fold.

The new album is no different from this twisted path they have been taking- already the internet is full of former fans pulling their out at the new single Eez-eh— despairing at is deceptively lightweight electronic pop wheeze and bizarrely wacky video but the song is a great piece of modern pop – a short rush of melodic weirdness built around a freak disco riff and a lyric that marries the modern tech terms of our internet culture with a twisted love song and even crams in some sort of political edge- allow yourself to go with the flow and its  atruly fab 3 minutes of 21st century pop.

The song is a precursor to the album which is a great piece of work and has been overshadowed by their press declarations that they are the last great rock n roll band and that Glastonbury is their crown for taking- all good copy and we do love a big manifesto statement but Kasabian are a far more complex beast than these soundbites suggest and the diversity of the new album is quite wonderful.

With their combination of Gallagher swagger and Primal Scream eclectic electric love of electronic rock n roll Kasabian have forged ahead and created their own template and 48.13 could just be their masterpiece- their Sgt Peppers- their initially awkward reinvention that wrong foots long term followers before becoming their crowning moment.

They have kept their creepy crawly slow burning athems like Bumblebee which with its added distorion and monster compression sounds far better than on the recent Jools Holland show airing hinted at , whilst the openeing Shiva sounds like the soundtrack from one of those Goa beach bars with its oddly attractive cod mysticism, Stevie is orchestrated and stomping classic lad rock and is built for an army of trainers to stomp the mud in some far flung festival field whilst Doomsday is another anthem that will be huge over this summer. Treat is a quirky piece of quixotic weirdness- a dirty disco of strange beats and freaky dancing, Glass is a spooked ballad- like a 21st century Verve, Explodes is a return to their soundtrack infused soundscapes whilst Levitation is pure drugs, Clouds is a slice of captain trips rock n roll and Eez-eh we already know about with its playful Daft Punk tinged madness, Bow is a nod to Liam Gallagher in his Oasis pomp with a gigantic chorus and s.p.s has  a nice psychedelic touch to it.

Melodic and inventive- Kasabian never do the obvious thing and are an underated force who never rest on their laurals, like their home town Leicester City have come a long way- both are now premiership material – this is a band that is at the top of their game in 2014 and with a Glastonbury headline slot and the big album ready to go this is their moment.