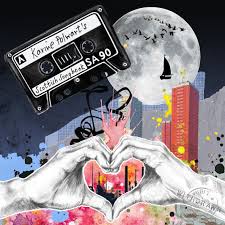 A tartan flavoured section as Folk songstress Karine Polwart takes on anything and everything as long as it’s from North of the border.

How do you follow up Mojo’s Folk Album Of The Year? Even we were very taken with 2018’s “sublime” Laws Of Motion – reviewed here. It’s a common occurrence in the folk genre to see artists regularly interpret traditional song so here’s a variation on the norm with Karine doing what most would call a covers album. One that spans fifty years of Scottish pop. “I’m covering these because they matter; they say something about where I’m from and where I live,” is her unnecessary justification and to her credit,  she’s avoided straightforward and true arrangements, opting for a deconstruct and reassemble approach that throws new light on many familiar songs.

The theme of emotional and political resonance runs strongly through the selection – Ivor Cutler’s Women Of The World, in particular, was a kick starter that brought the work political activist and songwriter Mary Brooksbank to greater awareness. It provides the familiar closing piece that follows on a route that takes in the work of  The Waterboys, John Martyn, Deacon Blue, Big Country and Biffy Clyro.

Deacon Blue’s Dignity revisits post-industrial Scotland and the realism of Big Country’s Chance spell out a bleaker vision and while John Martyn’s original Don’t Want To Know is a typically dreamy piece, it becomes ramped up in the light of current affairs for which the lyric provides a portent potent. “Arcade Fire does John Martyn,” she calls it.

However, it may be Strawberry Switchblade’s Since Yesterday that proves the most striking interpretation as the voice of Karine’s grandfather is edited in to give the saccharine pop reminiscence of the original a vein of steel, a new sense of realisation acquired with age and experience. No longer the fun of the cassette mixtape from the cover, but now a sense of realism in how many of the words and viewpoints from those songs now carry even more meaning.

Chvrches’ The Mother We Share is a lively uptempo rendering but in combination with the morose Martyn effort, is typical of the contrasting moods you’ll find in the set. It’s a well thought out concept that could have resulted in a routine collection, but executed consummately.

Watch the video for Chance  here: