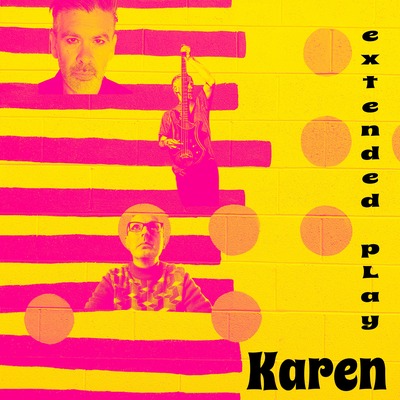 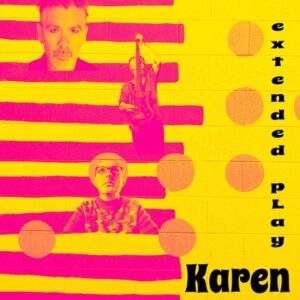 Indie-rock veterans assemble, give their band a woman’s name, write instant classics and release them on a chaotic indie label. You don’t need to remember the Brilliant Corners, the Heads or Beatnik Filmstars to dig the cool tunes of Karen – a Modern Lovers for the 2020’s….says Ged Babey.

Another contender for Worst Band Name Ever! The songs though are works of casual genius…

Davey Woodward was singer and songwriter in 80’s indie band The Brilliant Corners. formed The Experimental Pop Band in the mid 90’s  In the last decade he formed Karen and has recorded and released 3 solo albums, two with The Winter Orphans.

Tom Adams, on drums was in Secret Shine, Beatnik Filmstars, The Total Rejection and The Fauns.  He also has his own band The Dukes of Mumbai, who play surf versions of songs including ‘Blue Monday’ and Kraftwerk’s ‘ The Model’!

Hugo Morgan – bass in The Heads for nearly three decades, now in the reformed line-up of Loop currently working on a new album with them… as well being in Karen.

They first formed 2015. Recorded their debut album in 2016 which was never released and remains in a vault to this day.  … prolific in their idleness, it’s a small miracle this collection of songs exists bearing in mind Karen have not rehearsed or played any gigs of note for the past 5 years and have no plans to play or record in the future.

This EP is brought to us by Shambotic Recordings:  arguably the most chaotic, disorganised and contradictory indie label around.  They release high quality music from talented people from all over (who tend to have been in other bands in the 1980’s and 1990’s) but only on streaming and download platforms like the vile, evil Spotify – the nemesis of all Indie trainspotter purists and vinyl fetishists.  The label is run by a man whose double-barrelled surname ends in the word Evill. (I imagine somehow that he lives in a lair with henchmen..)

Everything fits as long as it’s SHAMBOTIC: A shambolic state of drunkenness, where ones blood is largely made up of Vodka and Nano Bots.

The regrettable video for the quite brilliant song Carrier Bag captures the band suffering from Lockdown madness and making arses of themselves.

Described as “Carefree rock’n’roll recorded with the minimum of fuss” there are distinct Velvets / Modern Lovers influences which never go out of vogue as far as many of us are concerned.

Let’s just say Its rock n roll with the emphasis on great tunes that whirl around in the head for days on end. It makes me want to hold my arms around my best friends, dance, jump and have a damn good time. Here is a band clearly enjoying themselves, playing with freedom, zest and joy and if a little bit of that can rub off on you that’s got to be a good thing.

Estuary is just as good. The lyrical trip back to the late 70’s has that yearning nostalgia for simpler times. Christ, even a couplet like: Got my head kicked in on the bus coming home from town / Blood all over the pillow case and the eiderdown brings a rose-scented tear to my eye.

Middle-aged beauty don’t need no liposuction / So what if your hair’s gone grey, it’s a constant evolution.…  is the great opening line to Major Axe which has a riff to die for. If this song got in a surreally metaphorical fight with Teenage Fanclubs ‘the Concept’… it would win.

Too Late manages the impossible – to make a repeated line like ‘It’s too late now baby’ not sound corny and a vocal style that simultaneously has echoes of Bob Dylan and Marc Bolan.

Lots have bands have done this kinda thing before: setting songs in a childhood 1970’s / casting a cynical eye over the parallel teenage and middle-age landscapes of now; The Auteurs ‘Bootboys’ era was particularly good whilst Denim’s Back In Denim too studious and only partially successful to my mind. Karen do it beautifully.

(There is a full albums-worth of such delights due to be released on CD and vinyl on Raving Pop Blast late summer of 2022 so this EP is the first taste of forthcoming feast.)

Karen manage to be geniuses with their eyes closed and (seemingly) no effort whatsoever.

They are not only a retro-modern lovers, they are fighters and dreamers: fighting cynicism & apathy and dreaming of a mythical near-future where things are as cool and groovy as they were in the idealised-past. And where all great music sounds like this…

Stop Press:  Karen WILL play live in September I am reliably informed.