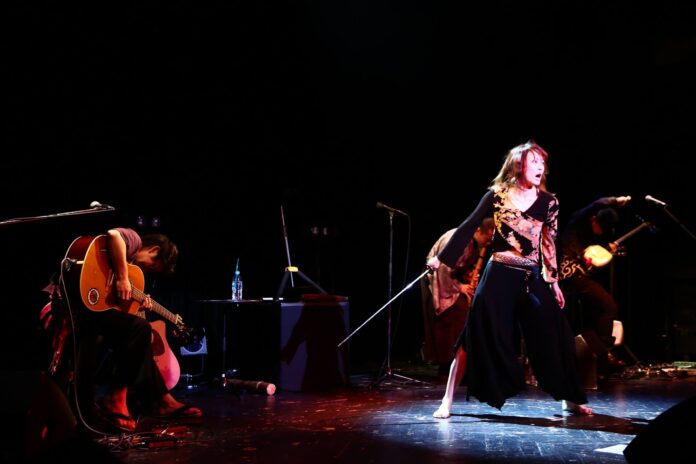 They are on stage playing a swirling combination of Japanese traditional instruments, a samurai sword is swirling through the air and ecstatic melodies are entwining the whole thing but in a modern, this is now, kinda way.

This is a combination of traditional Japanese music with swords, thrilling songs and martial arts that are somehow turned into a modern music as they sound like 2014 which straddles the trad Japanese with a soaring and ambitious theatrical music that hints at the kind of theatre world of, lets say, Kate Bush’s stunning vision.

KAO:S are thrillingly original and have the songs to back it up.

The band play traditional Japanese instruments- strange shaped things with double strings and create a stark and beautiful sound for the sword swinging vocalist, Kaori Kawabuchi, to soar over. She has an amazing voice that leaps around the melodies and she somehow manages to do this whilst she charismatically sex dances with the swinging sword to the song’s ebbs and flows. It’s spellbinding and thrilling and a total new noise in a world stuffed full of repetition.

Formed in 2011 by Kaori Kawabuchi (vocal/sword dance), Shuji Yamagiri (acoustic guitar/vocal) and Jack (Tsugaru-Shamisen) they are part of a new Japanese music that doesn’t run away from its own musical history but has no interest in being a museum piece. This is the ancient and the modern rolled into one and could easily work in the UK and the West with its channeling of the perfect past into a modern music. A music that is delivered with the sheer charisma of the performers.

Fired up to form after the 2011 Japanese earthquake their very formation reflects the chaos that was Japan after the disaster. They were a band with a plan and combined elements from Japanese culture with influences from rock and musical theatre. Their sound is a blend of twin vocals and heavy acoustic guitar, overlaid with traditional Japanese instruments like the three-string Tsugaru shamisen and using a full range of effects. Complemented by Kaori’s spellbindingly powerful sword dance, KAO:S have quickly gained people’s attention in Japan and seem a dead cert for success in the west.

This is no normal band, aside from their music, the members engage in a variety of related art from the manga to their martial arts. This is a band that teaches samuri sword dance and writes the kind of songs that could easily crossover. If they play the right festivals in the UK, like Glastonbury etc, they will a dead cert for breakthrough. As they soar away on another fantastic song they have pulled you into their world because they have the music, the looks, the style and the originality to stand out in an overcrowded world simply because they are breath takingly brilliant.

As Nitesche once sort of said, ‘Out of KAO:S comes order…’