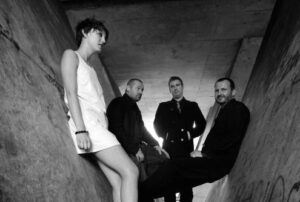 There are few heartwarming stories in music and there are few more devisive figures than Kanye West but you have to hand it to the world’s biggest selling artist – he certainly knows his music.

On his new The Life Of Pablo album Kanye West has sampled Section 25’s track Hit from their 1981 Always Now album where he uses half the Blackpool based post punk band’s song and ends up bizarrely almost duetting with their late singer Larry Cassady.

The original song was a paean to the recently murdered John Lennon whilst Kanye is a tribute to his partner Kim Kardashian – a weird mixture of meanings and time zones and the perfect example of the digital post modern.

Unlike the days of old when huge acts routinely stole riffs and rhythms from underground acts and never paid a penny this brilliantly realised sample of the post punk band should see them getting paid and also shine the spotlight on a brilliant idiosnycratic career that has seen them release some great albums including their Always Now debut which still stands up as equal to Joy Division in the North West post punk and Factory Records canon – a fact recognised by Joy Division’s Ian Curtis who loved the band and by Louder Than War who reassessed the album here.

Section 25 have a series of dates coming up and are still writing and playing their brilliant glacial neo-pop.