Home Blogs Kanye West Glastonbury controversy – a for and against argument… 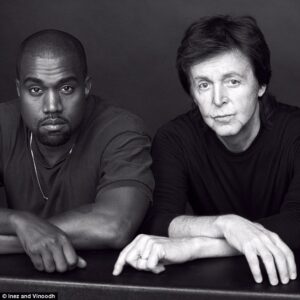 The Kanye West/Glastonbury controversy just won’t go away. There has been an online petition started by someone who doesn’t go to Glastonbury with 100 000 signatures on it saying he should not perform and a rolling debate on whether he should or should not play.

So in the interest of fair play we have a for and against debate over his controversial Saturday night headline slot. Tina Kelly argues that he should not be on the bill and John Robb counter argues below

Open letter to Emily Eavis from Tina Kelly
Hi Emily,
I’m sure you’re fed up with the vitriol that has come with your decision to book Kanye as your Saturday night headliner. So hats off to you for seeing it through, despite all backlash you are receiving. But surely you must question why the haters are hating so much. A world class, Grammy winning artist must surely be a satisfactory candidate for filling the slot, yes? No.
As someone who has been coming to your dad’s festival for over 20 years – there through the mud and disasters; the year the NME stage sank and someone was killed, that same year when someone had the great idea to take the poo sucking truck in to the dance tent to clear out the mud, only to accidentally turn it to blow and blast the early morning ravers with faeces; to other years when it was so hot, you had to spray the dirt tracks with water to keep the dust down. I was there, through all of them and I will continue to do so.
And yes, there will be countless other things happening whilst Kanye is on. I am often bewildered how I miss so many of the headline acts, as I’ve been distracted by someone juggling chainsaws or completely absorbed by a stage less poet reciting their craft up at the tower.
But! Never, ever have I seen an artist booked to play at your festival that has such a disregard and total ignorance of music as Kanye. A man who has no shame in calling Beck, talentless. Shame on him. And more shame on you. I for one, and quite possibly all your patrons would be delighted to see you replace Kanye with Beck. Kanye belongs at festivals like V and other fully commercial gatherings. Not yours. It’s a sad day for Glastonbury to see this go ahead. And an even sadder day for you to carry on justifying his booking. Please, Beyoncé and Jay Z were a push, but this guy is a bridge too far. Do a straw poll with your ticket holders to see if they would rather have Kanye or Beck. I have no doubt that the music fans will win…

The whole Kanye/Glastonbury debate has been a pretty awkward. It’s fast becoming a bit Father Ted holding the ‘down with the sort of thing’ placards…

The argument seems to go that one of the world’s biggest pop stars has no right to play Glastonbury because he said nasty things about Beck and has ‘no musical talent’ and that this is not a ‘Glastonbury type of music’ and is arrogant/not nice etc and that no-one can ‘name 3 of his songs’.

To be honest can everyone name 3 Mumbleford and Sons songs? Can everyone who reads this site name 3 Fleetwood Mac or 3 Kasabian songs?

Are only white heritage rock acts or indie bands who hang on forever the only music that is allowed to headline Glastonbury and when did festivals become so suffocatingly straight with the modern equivalent of the crusty majors who used to write to the Daily Telegraph complaining about those long haired louts in the Rolling Stones being rude to other people, of being gargoyles pissing on garages, not being able to read music, of being cavemen and having no musical talent etc fucking etc and signing off with their missive with the 21st century equivalent punch line of…

‘Why can’t we have those awfully nice people from Fleetwood Mac be headlining instead?’

One of the dangers for Glastonbury is that this mythical Glastonbury type of music can be seen as the Mumford and Sons knitted happy clappy folk stuff underling the old adage that nice people don’t make great music. The people that argue that Glastonbury is not alternative any more are the ones that have turned it into a great British Instition like the boat race or the Henley Regatta with their imposed rules of what it should be like and therein lies the real problem.

People say this Kanye West is ‘not Glastonbury’ and that you can’t name 3 of his songs but he is one of the biggest selling artists in the world. People don’t like Kanye’s arrogance or the fact that he is rude about other singers – this criteria would rule out nearly every headline act out of the festival in its long and colourful history along with other accusations that he has a huge ego and is all mouth and trousers – I’m not sure if the Rolling Stones are the nicest people to deal with or that Fleetwood Mac would have done a stint of cleaning the toilets for the happy clappy campers or that Prince would have got the train to the overcrowded nearby train station and carried each punter into the festival on his back if he had played. Big stars are generally big stars because they are unpleasant and they have found a way to command a big audience with a few musical tricks and big egos.

Being nice is not a prerequisite to being talented. Being polite about other performers is pretty dull! so what if Kanye West was a bit of a buffoon over Beck – maybe he had his reasons but it’s no less or more rude than Mark E Smith gets applauded for or what Noel Gallagher ever says about anybody. It seems to boil down to whether you like someone’s records or not how much they are allowed to act like a fool.

It was the same argument last year when Metallica were announced as headliners – there much hand wringing in polite tweedy online comments circles over this ‘unknown’ ‘cult’ band getting to top the bill- ‘can anyone name any of their songs!’ they typed furiously…and it turned out that Metallica went down very well.

For me the whole point of Glastonbury is to see stuff you never normally would. It’s a step out of the comfort zone- a chance to slip out of that battered old fleece or a step to the side of the Jeremy Clarkson world of music and into something slightly different.

In a sweetly traditional way that harks back to middle England complaining about the devils music of Elvis (never wrote his own songs, was the devil’s music, was raunchy and not like those lovely brass bands etc) or the Beatles (look like girls, won’t be around in two years, all the songs sound the same, can’t read music and are just a boy band etc) or punk (no talent, all hype, just shouting etc etc) this letter writing, these petitions have gone on for ever.

My personal taste veers around a lot- I tend toward the noisy and the insane – the Killing Joke/Swans end of the scale (I can name all their songs! they should headline!) with flurries into off the wall music from the rest of the planet as well as classic stuff like the Roses etc. My only complaint with Glastonbury is that it doesn’t stretch the envelope far enough.

It’s great that Kanye West is playing – I’m sure he is a royal pain in the ass. I wouldn’t want to share a cab ride with him, I have little interest in his strutting about at boring awards ceremonies and I don’t really care what he thinks of Beck and care little about how naughty or objectionable  he is as a human being – a lot of records aI love are made by people I don’t like.

I would quite happily go and see a couple of his songs to see what he does before slipping away into the midsummer middle England mud of Glastonbury to watch a couple of other things unless he holds my attention and that is the bottom line of any performer and not what they think of Beck.

The best stuff at Glastonbury is not on the main stage. That’s not the battlefield.