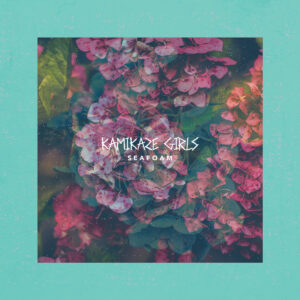 If there was a single track that managed to encapsulate the frustrations and optimism of Seafoam, the debut LP from Kamikaze Girls, it would be the sprawling final track ‘I Don’t Want To Be Sad Forever’. Coming at the end of the record, the track plays out as a cathartic culmination to all that comes before it. And while cathartic is certainly the right word to describe the track, and indeed the record as a whole, it’s not strictly the optimistic brand of catharsis one might expect.

“I don’t want to be sad forever” laments singer Lucinda Livingstone, “but I guess I probably will be”. It’s a telling lyric. One that not only captures the sombre tone of the album, but the thoughts and feelings of much of her generation as well. A generation, who for the first time in decades, are facing a future of uncertainty.

Of course, Seafoam isn’t a record hinged on anxiety and uncertainty alone. It’s bold and brave. Addressing issues such as misogyny (KG Goes to the Pub), mental illness (Good for Nothing and bonus track Anxious) and suicide (Weaker Than). Heavy topics indeed, and though personal in their delivery, the resonance is universal.

It’s this resonance that forms the core of Seafoam, a record wrought with very real issues yet that stands defiant in the face of them. And while stories of gun-point muggings, sexual harassments and addiction are strewn throughout the album as liberally as the fuzz that coats each track, the band’s ability to say Fuck You in the face of adversity provides a sense of solidarity that speaks volumes in today’s social climate.

Unapologetically raw, both emotionally and sonically, Kamikaze Girls have crafted an album that offers a voice for the voiceless and a glimmer of hope for the despondent and downtrodden. And though the issues addressed are unfortunately familiar, rarely are they discussed with such fierce frankness, and for that, Kamikaze Girls need to be commended.

More from Kamikaze Girls can be found on Facebook and Bandcamp.