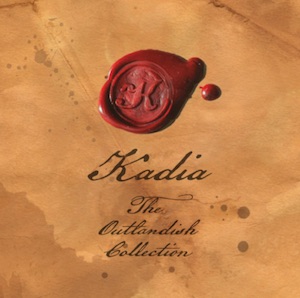 Their East Of Alexandria debut album  caused a stir in 2015, even making the Telegraph top folk album list as well as acclaim for their live appearances at some of the top festivals alongside some top names. What they’ve done with The Outlandish Collection is to gather  an EP of numbers that have been in the repertoire as an add on souvenir.

There’s a palpable feeling of excitement of recording in a real analogue studio adds an element of organic  authenticity to the selection of traditional folk songs and tunes. With the lead single – Lady Isabel & The Elf Knight – getting an airing on Ange Hardy’s Folk Findings show, it adds  another stamp of approval. It’s a popular song  in the folk community, as for once the dastardly and murderous elf knight finally gets his comeuppance and the stand out of the EP. Let’s face the fact that anyone worth their folk salt should do the business with this song.

The five tracks cover all bases and having done  the unaccompanied The Keeper  they tick the box too with their  tune playing. The medieval feel of Cricketers Set highlighting Lee Cuff’s cello and double bass that add  an element of grandness apart from the more expected mandolin and accordion.

Kadia’s strong roots in the British folk tradition – the five songs covering shanties, jigs, reels and innuendo; plus the folk tradition of storytelling. The EP provides a  succinct summary of what they are about and a cool little diversion from the main course of their album.

You can watch the video for Lady Isabel and the Elfin Knight from the EP here: