Home Blogs Justice for the 96/the only campaign that matters/and the tour when music... 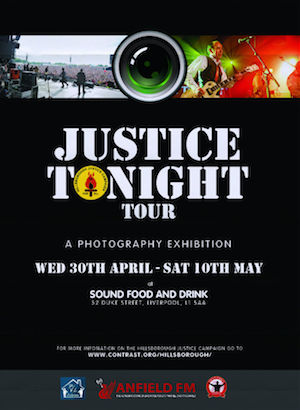 The Hillsborough verdict this week was an emotional and powerful moment and a reminder that dignity, compassion and sheer will power can sometimes win – even if it takes a ridiculous 27 years standing up to everything the state can throw at you to get to the truth.

The fact that this was a campaign conducted by so called ‘normal’ people makes it even better.

A real triumph for dignity.

The whole rotten establishment which, even then, reeked with its hatred and mean mindedness has been fully exposed by this dignity of the battle by the relatives of the Hillsborough victims. It’s one of those rare moments when normal people – people from all walks of like- people like you – took on the battle to get the cause of the pointless and needless deaths of their loved ones. They put up with all kinds of lies, deceit and tabloid filth – the book was thrown at them by the scoundrels of the establishment like the surely totally disgraced Kelvin Mckenzie, the odious Bernard Ingham and Thatcher’s hatchet face who preferred their own narrative that the fans were drunk hooligans. The establishment’s barely concealed hatred of the national sport and the fans and the places they came from driving them on.

Surely no-one can even think of building a Thatcher museum after all of this.

Unless they have a wing dedicated to Orgreave and Hillsbourough and all the other crimes that lead to the front door.

The stories from Hillsbourough leave you shattered and heartbroken.

They have been in circulation for years and yet they were pushed to the back of the national narrative who preferred to run with the falsified stories from the South Yorkshire police and the The Sun. The reducing of the fans to hooligan cliches, the damning of a whole city instead of seeking the real truth. This could have been any city, any football club crushed in those stands. Each story you hear, each death is a stab to the heart. The tabloids wanted you to believe that this was the latest episode in hooligan Britain – yet these were normal people – 37 teenagers, a ten year old boy, a pensioner. Within minutes of the disaster instead of rushing to help the fans the chiefs of the South Yorkshire police were trying to blame them and with the help of the Sun getting their own way temporarily and they would have won oi its wasn’t for the tenacity of the campaigners.

The campaign has lasted for years. Fought with passion and compassion and in many different ways.

In 2012 I was lucky enough to be the compere on the Justice Tonight tour. It was a tour put together by the wonderful Peter Hooton – the frontman of the Farm whose unstinting hard work and eloquent channeling of the rage, anger and emotion from the Hillsborough disaster had already been inspiring.

The tour sprung out of a one off gig in Liverpool at the amazing Olympia – the old venue on the edge of the city centre. Peter put together the concert together with the Farm and had added Mick Jones and Pete Wylie to the bill playing eachother’s songs and ending with the Farm’s anthemic arms aloft, embracing, All Together Now anthem. Getting Mick jones on board was the masterstroke – a long term fan of the Farm, Mick is, of course, a genuine rock n roll legend but a humble man and the fact he was going to sing long time untouched songs from the Clash catalogue was a big ticket but the self effacing guitar legend immersed himself inside the gig – his big grin being the motif of the concert and then the tour. It was grin that underlined the joyous songs but also the nature of the event – which was a powerful and emotional affair and proof that music still had a heart.

No one on that stage was ever claiming that they were driving this campaign – that was down to the remarkable relatives and the powerful women and the mothers. The musicians were trying to raise spirits and make a point. In may ways this could have been called an old fashioned tour – from the mythical days when we still believed that music could change the world. These were people who believed in the power of rock n roll to affect some kind of small social change or at least bring people together in room – a diverse selection of campaigners, music fans, rock n rollers, football fans, normal folks and freaks – their intersection when interesting stuff happens.

The atmosphere that night was electric. You could cut it with a knife. I was the smallest cog of them all – the compere – and I had a rare attack of the nerves. This felt very much like a Liverpool thing. Hillsborough wasn’t the national cause that it has thankfully become. At the time it felt quite regional. I wondered if I would be imposing on a very private affair but the welcome was wonderful and literally embracing with man hugs all around from the beautiful people on and off the stage. It was part of that all empowering warmth and humanity that would eventually see the bigger campaign victorious.

It made you believe in life and rock n roll and how sometimes music with a reason and simple things like guitars and electric folk songs can do their bit as well. This was also the only way the Clash songs could be brought back to life and we knew that Saint Joe was smiling somewhere up there in the ether and if all this sounds a bit sentimental then why the hell not? it was a powerful evening that sparked a whole tour thats aw special guests every night from the Stone Roses Ian and John making their first stage appearance for 16 years, James Dean Bradfield, Reverend And The Makers and Mick and Paul almost resurrecting the Clash as well as many other guests. It was ad hoc. It was thrilling and it was shredded with emotion. Perfect.

The Hillsborough campaign itself, this week, finally found a justice and now it seeks accountability. Everyone on that tour knew the truth and the new the accountability goes right to the very top where you can smell the rotten stench of the British establishment.

I’m old enough to have grown up in the sixties when we were told that those in charge knew what they were doing. People still believed that crap then. No-one believes in it now. When they ask why people don’t believe in the system any more it’s because they all know as well now.

The establishment, which even then, reeked has finally been exposed as being a lying, conniving and deadly cocktail of prejudice and hatred. There really was two Britain’s and the only one with any dignity was the one that won this 27 year long campaign. The amount of time it took before the truth came out is appalling and real signifier of just how broken the system is and how weighted it is in the favour of the controllers.

Looking at the footage the Hillsborough and the eighties is telling. Even the surrounding buildings with the dank, damp brickwork look like they are from another world – their very dampness and crumbling brickwork a reflection of the moral rot in the upper echelons of society itself. The broken stadiums matched the broken cities. The eighties was a battle ground. It wasn’t club Tropicana it was a broken nation. You just assumed that the big British cities were meant to look like mini Beuruits, that seemed normal. Every time the frustrations reached a boiling point they were slapped down again – the 1981 riots, the miners strike, the endless discontent and yet Thatcher still waved her handbag and her ghoulish disdainful stare at the people who somehow kept voting her back in.

It seems hard to believe that anyone let it get like this Hillsborough was the heart breaking result of this horrible government. The attitude to the public was telling. This attitude was matched by the way they treated the football fans – herding the fans into ‘pens’ – pens! even herding animals into pens is revolting.

Football itself was a reflection of this society- broken, crumbling bricks and mortar stadiums stadiums that were accidents waiting to happen, run by shadowy figures in smoke and drink filled rooms, a government that actively hated the fans and was at war with its own people that were herded like animals.

The verdict has been too long coming but maybe its finally chance to sort this mess out.