Home Blogs Just what is 5 million quids worth of punk memorabilia to burn?... 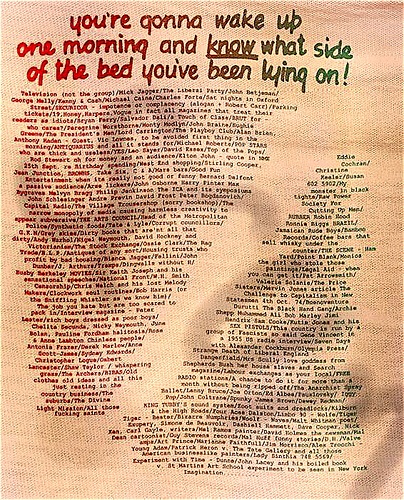 1. Spirit of punk in a bottle…quite smelly but incredibly potent. The ‘eau du seventies’ … Crack open and sniff a whiff of a decade falling apart!

4. The original design for the ‘you’re gonna wake up ‘ t shirt before a hasty redesign…the ‘in’ side of the shirt includes Showawadyway, Rod Stewart, Frank Spencer, the queen mother and ‘the first series of the Good Life before it got weird and a pat on the back for the Goodies – lots of felt tip crossing out on the prototype t shirt

7. Bernie Rhodes…hovering in the background with lots of ideas

8. The choir from Wales … As seen in the rock n roll swindle film…still singing carols and trying to hold back the forces of evil whilst like the rest of the establishment not noticing Jimmy Savile and his merry gang and a deranged defrocked priest…

11. A video of the Bill Grundy Interview warm up with no swearing and a very happy manager!

12. Cassette tape of Rotten’s famous audition to the Sex Shop jukebox – he sings beautifully, like Aled Jones, and is told he’s got the job but must learn some ‘attitude’ to guffaws in the background of this long lost recording…

14. The Newspaper that the original punk lettering was cut from…complete with holes in the headlines!