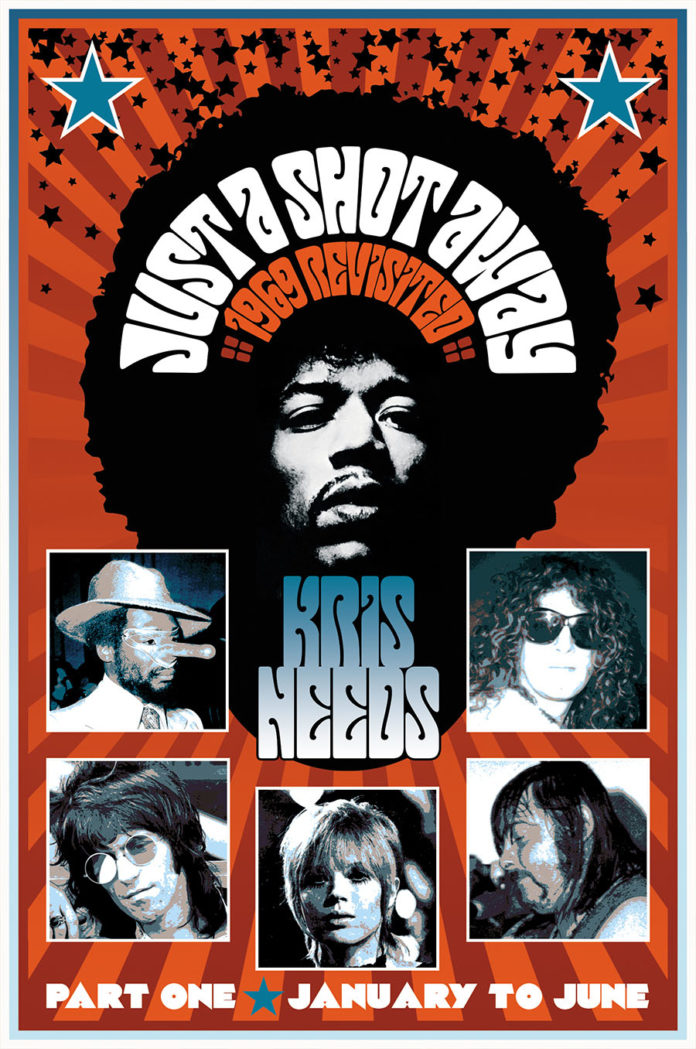 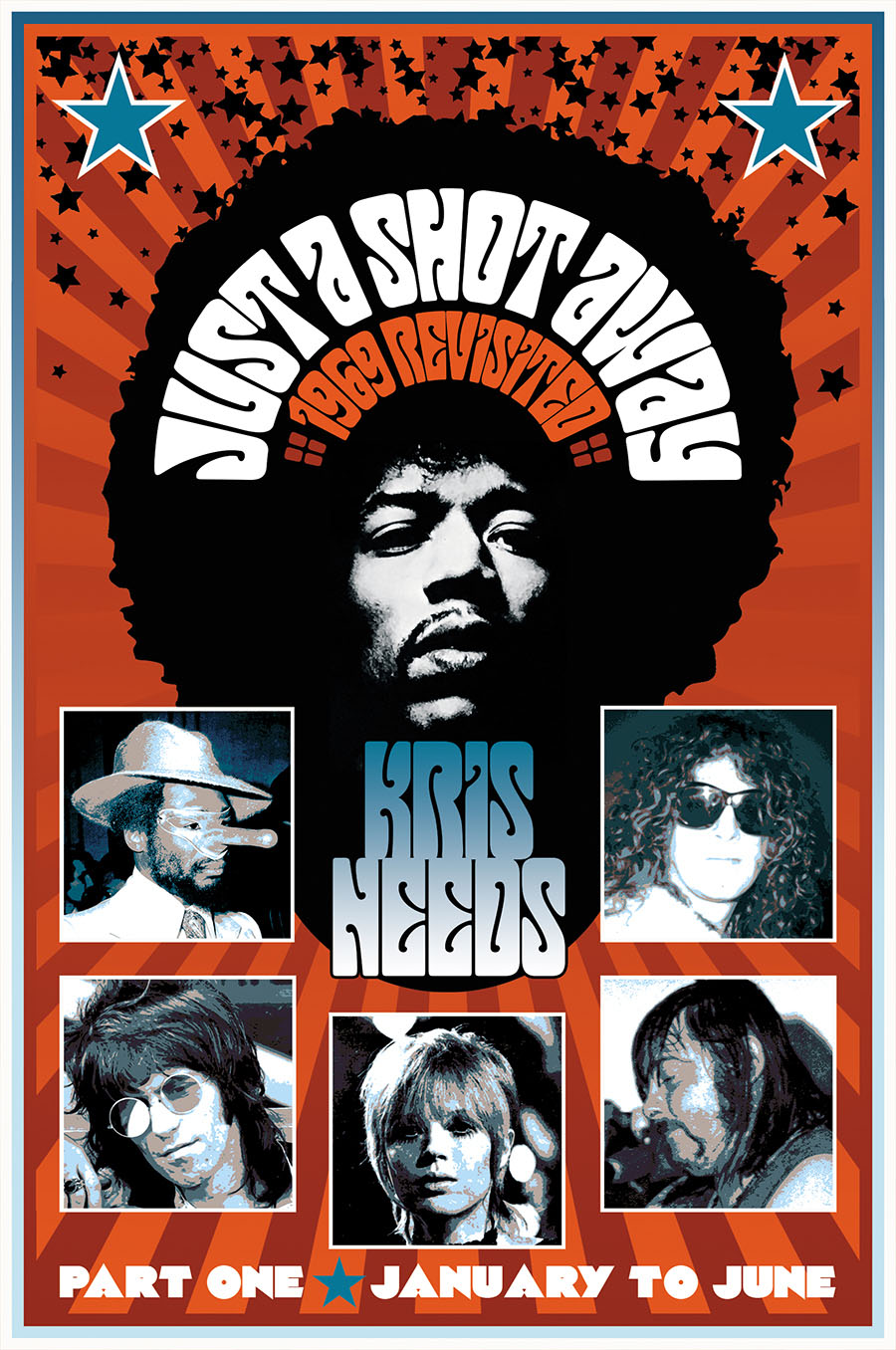 Amy Britton looks over “Part One” of Kris Needs very personal account of an exciting year in music.

In a world in which autobiographies are seemingly produced endlessly, anything going against the grain of the childhood to glory years/fame to current perspective format feels like a breath of fresh air. There’s something simultaneously much more personable, not to mention more literary about anyone’s decision to zone in on the microcosms of a moment in time. It’s what legend of music journalism of former editor of ZigZag, Kris Needs, has chosen to do for his memoir of 1969, “Just A Shot Away.” Published in two parts (this “part one” documents January to June), focusing on this particular year allows Needs to put his full focus on this pivotal year in a full bildungsroman fashion, never having to rush each moment which is played out with the warm, bright nostalgia unique to a teenager’s eyes.

There is something uniquely magical about the teenage experience of living through an exciting cultural period and Needs conveys just how it must have felt to be fifteen in this famously colourful period by playing it out in real time, in the same punchy, conversational style that has defined much of his journalism. 1969 sees the teenage Needs surrounded by cultural lightning bolts filling up the television screen and oozing from the airwaves. Jimi Hendrix and The Rolling Stones (who would suffer the death of Brian Jones in this year) bring their brand of devil-may-care danger to the nations living rooms on television; the radio, meanwhile, proves to be even more of a connecting factor to a more exciting world as Needs describes nights listening to John Peel and whatever groundbreaking sounds unheard elsewhere might emerge. It is, by all accounts, an almost universal story to any teenage music fan of that era.

Whilst it’s not just the musical element that makes Needs account so universal though – small touches like the cool best friend are widely recognizable! – its his general firm focus on this as opposed to the more conventionally autobiographical details that some memoirs take which ensures its Needs role as a music journalist – one of exemplary brilliance – which defines him even when looking back on the past. Needs points out that his teenage world was one that forever revolved around the next gig or musical event, and having fully immersed himself in that world that enables this memoir to be what it is. Of course, his journalism, particularly his time at ZigZag, defines to “plot details,” so to speak, as much as the style. The way Needs tells his story is to intercut his descriptions of 1969 with reflections from his later life, juxtaposing the dreams of teenage possibility which the reality of adult dreams-come-true. This style enables Needs to write about his own adult life with a kind of wide-eyed wonder in itself – from hanging out with Keith Richards to finally experiencing living in the Bohemian New York of Warholian dreams, by slotting them alongside his adolescent listening habits the reader gets to fully appreciate how truly exciting life in music journalism in be. Its refreshingly non-cynical, unashamed in its excitement, turning world-weary old clichés like “never meet your heroes” on their head. (And, if I may personalise this review myself, rightly so!) It probably goes without saying that is not all just frivolity and optimism, there are of course many twists and turns into darker, more melancholy, or simply more moments – a later-period description of bonding with the enigmatic Nico, is as evocative in its glacial brand of grown-up cool as the teenaged-bedroom in front of the television accounts are of coming-of-age excitement.

The way Needs uses the opening to talk about the tragic death of his wife and soulmate, the writer and publishing figure Helen Dunlon, whilst he was writing the book also casts a poignant edge over the whole thing – knowing that he was writing it through such emotional turmoil makes the warm nostalgia even more touching, spinning his personal writing style into something more intimate, as Helen becomes the supportive eye over the whole process, looping in the narrative at regular, touching intervals.

Around the publication of his own account of a year in the Sixties, “1966: The Year The Decade Exploded ” Jon Savage that he feels that the year you turn thirteen is the one that musically defines you. Whilst I wouldn’t take this as concrete (more fourteen for me, and clearly fifteen for Needs) the sentiment about the particular nature of teenage life and culture is a unique one. Whilst Savage chose a more historical narrative for his excellent account of his year of choice, coloured by socio-political and well as musical change, Needs is very much a memoir and inside view; an invitation into that adolescent world, the bedroom, the venues, the ears and eyes. Whilst being able to “bottle” that teenage joy will of course be forever elusive, Needs account of this turning-point of a year certainly enables the reader to hold a glorious mirror up to it. I look forward to Part Two.

“Just A Shot Away: 1969 Revisited” is out now published by New Haven Publishing.

All words by Amy Britton. Find more on her archive or via Twitter as @amyjaybritton and Instagram as @amy.jay.britton