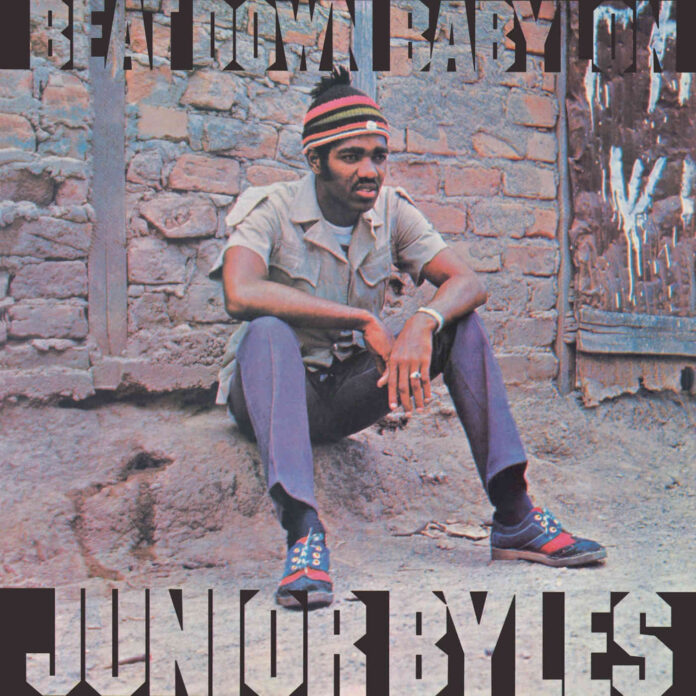 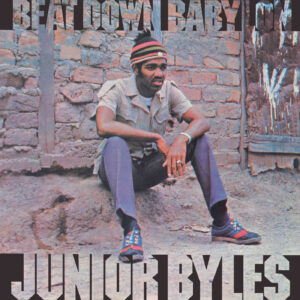 Reissue of Junior Byles classic 1972 album cut with Lee Perry on production, plus oodles of bonus tracks over two discs….LTW Ian Canty hears what is rightly regarded as a roots reggae landmark…

By the time of the Beat Down Babylon album Kenneth Thaddeus William Byles Junior, aka Junior Byles, had in effect replaced Bob Marley And The Wailers in Lee Perry’s production stable. Pretty big shoes to fill, but the man’s singing and songwriting talents were up to the task. Born in Jonestown in 1948, Junior first came to prominence as part of vocal trio the Versatiles, where he performed alongside Dudley Earl and Louie Davis. They recorded fairly successfully for Joe Gibbs through the rocksteady era, but at the beginning of the new decade Byles launched a solo career. Lee Perry was aware of Junior’s abilities as he worked for Gibbs’ Amalgamated label during the Versatiles’ sojourn there, indeed it was he who originally spotted the group when they entered Jamaica’s Festival Song Contest in the late 60s.

Lee began recording with Junior Byles in 1970 with What’s The World Coming To, featured on the album under its alternate title Demonstration (And Protest). This disc was followed by Place In Africa, a much-versioned Afrocentric classic, where Junior told the tale of a youngster’s mental search for his roots far away from Jamaica’s shores. These two releases clearly showed that the Byles/Perry link-up was on a totally different level to the skinhead/boss reggae of a couple of years before. Something new was happening.

But the real breakthrough came with the Beat Down Babylon single, which was an instant classic and immensely popular in Jamaica. Everything was spot on, from Byles’ lyric of Rastafari finally triumphing over the oppressors, to his sparkling singing skills, to the perfect instrumental backing provided by the Now Generation and of course with Perry in the studio keeping the rhythm tight. Naturally with this record being such a success, an album was assured and his debut arrived in long playing form during the winter of 1972.

Beat Down Babylon is simply an ace of an album. Recorded at Dynamics’ studio with Perry assisted by engineers Barrington Lambert and Carlton Lee, this record transcended the type of “collection of hits format” that still dominated the reggae scene. Despite having a stack of great single tracks it truly hangs together as a solid piece of work. It was an early calling card of roots reggae of course, with Byles’ Rastafarian beliefs and social concerns coming over strongly throughout the set. But the tone employed is never one that hectors, he never overplays his hand or resorts to sloganeering.

A wider range of sound is used too, somewhat more than many that tapped into the same well of inspiration and Byles touch and viewpoint is inclusive and accessible throughout. Plus of course he’s helped by the fantastic playing and Lee Perry at the height of his production powers. A good variety which probably best exemplified by Matter Of Time, a real R&B musical base providing the ideal setting for Junior’s voice to really take off.

The LP begins atypically with (Festival) Da Da, a nice dance tune also issued as a single. This one is without any social message in the words and in some ways this is what put Junior ahead: he would always “sweeten the pill” with either some pure fun or real emotion. The other singles are of course of the highest quality, but less-known offerings like the cool and militant I’ve Got A Feeling and the slow and seductive Coming Again match them. Perhaps Don’t Know Why isn’t the best Byles lyric, but even that is improved by some lovely subtle piano work. Joshua’s Desire has neat melody lines which provide the backing to a direct reference to People’s National Party leader Michael Manley, who saw himself as the biblical character Joshua, complete with rod of correction.

Poor Chubby finishes the album on a downbeat note, bemoaning the real possibility that Junior’s day in the sun might soon be over. Unfortunately over time he would suffer many of the humiliations stated, but he was on the top of his game here and musically this tune is an ace with a lilting rhythm that belies the serious point of the song. Overall Beat Down Babylon was a cut above most reggae collections of the time and continues to be so, a real album with depth and abundant appeal.

The bonus tracks appended to this disc feature single cuts from around the same time and their attendant dub versions. Perry is in his element adding his own brand of gobbledegook voice interjections to the Beat Down Babylon rhythm on Righteous Oily and doing the same along to (Festival) Da Da, renamed Come Da Da. Informer Man farms the same Beat Down rhythm with DJ/toaster Jah T aboard and this one gets its own cool version by the Upsetters entitled Outformer Man.

Byles was attuned to the political and social situation in Jamaica as we have seen from his songs on the album. Leading up to the 1972 general election Junior again showed his support for the PNP on his single King Of Babylon, casting Labour leader Hugh Shearer as an Egyptian pharaoh. Its dub version Nezbuchadnezzer has a lovely use of drop out. This disc ends with the Versatiles’ original take of The Thanks We Get, cut during the final days of boss reggae.

The second disc rounds off Byles’ work with Lee Perry and includes the excellent Rasta love song Curley Locks, another big hit for Junior in 1974. It is followed by a couple of dub and toasting versions Lock And Key and Dreader Locks that work very well. They are prime cuts where Perry alternately melds the rhythm and echo talks his way over the beat. Rasta No Pick Pocket is excellent, a true classic chiding the rude boys who used Rastafari as a cover for their illegal activities.

The cutting lyric to When Will Better Come showed that Junior wasn’t prepared to be an apologist for the PNP when things did not improve for the average Jamaican after the election and at the opposite end of the spectrum Pretty Fe True is a dreamy reggae love tune. The collection ends with another version of Curley Locks which strips out the brass of the original and this pleasingly sparse arrangement is powered on by some superb organ work.

After breaking with Perry, Byles toured the rounds of Kingston’s producers, recording with Niney The Observer and Gibbs again among others. A variety of health problems have unfortunately beset Junior over the years, leading to his retreat from recording and performance as he struggled to maintain basic living standards. He was homeless at one point, but eventually moved into his father’s house in Kingston in the 1990s. Junior was reclusive and not in the best state of mental health, with heavy ganja use not helping. Happily since then his daughter Christine has become instrumental in gaining him the assistance he needed to overcome the circumstances he has found himself in, by organising a benefit concert in 2019 to pay off outstanding medical expenses and set him up in a better way financially.

Hopefully the future looks a lot brighter for him now. It would be wonderful to see Junior Byles make a comeback to the live stage singing some of the songs from this Beat Down Babylon compilation – they truly lifted my mood with their quiet determination and triumph of the spirit. A wonderful collection that set the standard for roots reggae and a true delight to listen to today.