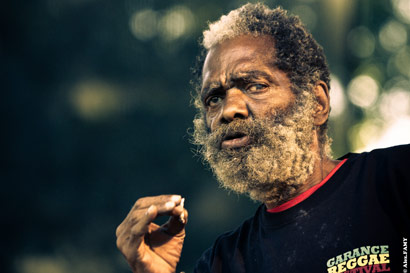 Junior Byles, a roots reggae pioneer, was a major star in Jamaica in the 70s, poised for international exposure. However, by 1976, he was confined to the mental ward at Belview Hospital in Kingston. He still managed to release countless brilliant records though, and it’s through these that he should be remembered. Here, Frank Bangay pays tribute to one of the less well known roots reggae pioneers.

Earlier this century I bought a copy of MOJO magazine. It had a free reggae compotation with it. One of the tracks on the CD was A Place Called Africa by Junior Byles. The song is a heartfelt cry on the Rastafarian theme of repatriation. Listening to it reminded me how good Junior Byles is. This made me check out some of the man’s other work. We will return to his music shortly. First I will tell you a bit about Junior Byles.

His full name is Kerrie Byles Jr. He was born in 1948 at Kingston’s Jubilee Hospital, and grew up in the city’s Jonestown ghetto. His father worked as a mechanic and his mother was a school teacher. His family were devoutly religious, and his early musical education was singing in church. In 1967 he co founded a vocal trio called the The Versatiles. At this time he was also working as a fire fighter. At the time Lee “Scratch” Perry was working as chief engineer for producer Joe Gibbs. He was scouting for talent for Gibbs new Amalgamated label and on hearing the group signed them. Two years later they went on to work with Lee Perry, who by this time was establishing himself as a producer. Then they moved on to work with Duke Reid for his Treasure Isle label. Also other producers such as Laurel Aitkin.

In 1970 the Versatiles split up. Junior Byles while still working as a fire fighter returned to working with Lee Perry. Other members of the group would sometimes provide harmonies on his recordings. Then in 1972 The Wailers left Perry to sign with Island. Perry needed someone to fill the void and Junior Byles fitted the bill. He gave up his job as a fire fighter, and over the next five years their partnership would produce some of Perry’s most highly regarded work. Every bit as good as the work he did with The Wailers.

In 1972 Junior Byles was one of several reggae artists who offered support for Michael Manley’s general election campaign. One of his songs Joshua Desire was addressed to Michael Manley while another song Pharaoh Hiding was addressed to Hugh Shearer leader of the ruling Jamaican Labour Party. Manley was elected, but changes for Jamaica’s poor were a long time coming. Junior Byles addressed this with the scathing When Will Better Come. These songs were released on his first album titled Beat Down Babylon. With musical backing from the Upsetters, this album showcases his song writing talents, and his haunting tenor voice. The title track has an anthem like quality to it, in another track Curly Locks he sings about how his girlfriend’s parents won’t let him see her because of his dreadlocks and his Rastafarian faith. There is the previously mentioned A Place Called Africa, while Poor Chubby hinted at his unstable mental health. The record also includes a version of the Little Willie John song Fever. A song made famous by Peggy Lee. While he was working with Lee Perry he was also self producing and set up his own Love Power Label.

In the mid 1970s Junior Byles left Lee Perry to work with other producers. Among the recordings from this period was a song called Fade Away (above). Some people consider it to be his finest work. “He who seeks vanity and no love for humanity shall fade away”. A couple of years later the song was featured in the reggae film Rockers. In 1976 he released his second album Jordan.

However by 1975, Byles health started to decline. He was suffering from depression and became deeply affected by the death of Haile Selassie. Unable to reconcile this with his belief in Selassie’s divinity, he attempted suicide. He survived and was admitted to Kingston’s Bellevue Hospital. It has also been suggested that he had been overworking, and that this contributed to his breakdown. After the admission his health continued to decorate. However despite regular spells in hospital he continued to record. But by the end of 1976 he had vanished from the scene.

He attempted a comeback in 1978 and recorded two singles for Joe Gibbs. However it was clear that he was still not well. He didn’t re emerge until 1982. Work on a planned new album went slowly. Then he suffered much tragedy when his mother died and he lost his home in a fire. His wife and children also emigrated to the United States. Apart from a few singles Byles would release nothing until his album Rasta No Pickpocket in 1986. The album sadly did not see a long lived upturn in his fortunes. The next year he found himself living on the streets, scavenging for food in dumpsters and begging from passers by. He did resurface in 1989 recording a couple of singles. Three years later he played a few shows with Jamaican guitarist Earl China Smith. In 2004 he returned to live performing in Jamaica. These performances received positive reviews. This lead to a short tour of the United Kingdom. I don’t know if Junior Byles career is still active, but I wish him well. However his recordings from the 1970s show him as being one of the pioneering voices in roots reggae, and are well worth listening to.

There is more information on Junior Byles on the internet. A lot of his recordings are also on Youtube.

When Halie Selassie passed away in 1975 it caused a lot of controversy amongst the Rastafarians, some felt that Jah had put away his physical presence and was around still in spiritual form, while others didn’t believe that he had passed away. Rastafarians see Halie Selassie as a living God.

All words by Frank Bangay, find his Louder The War archive here.