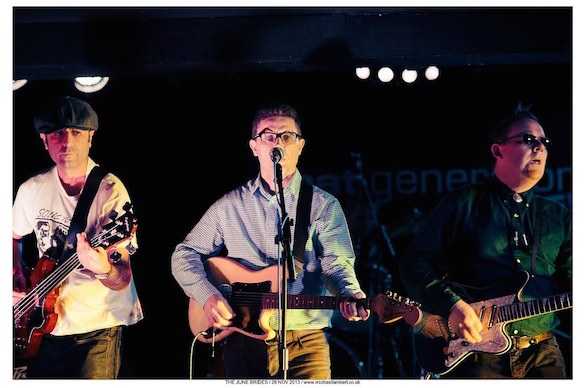 The June Brides, who famously number Manic Street Preachers, Morrissey, Belle and Sebastian, Alan McGee and, of course, John Peel amongst their fans, “finally “(to quote the band’s Arash Torabi) have a new single due out. It’s slated in for a September release and full details, plus streams of all of the tracks on it, can be found below.

I’m guessing most of us first heard The June Brides whilst huddled round our trannies listening to Uncle John Peel back in the day. Apart from those fans who were turned onto them when they found out Morrissey was a huge fan. Which he is. They formed back in 1983 and therefore hailed from the first wave of British indie bands. We’d probably label them as a  “C86 band” if it weren’t for the fact that they turned down an invite to be on that most famous of cassette tapes “for fear of being pigeonholed.” (So sorry guys for bringing THAT up again!)

Highly influential and true innovators, their mix of guitar pop with viola and trumpet became a blueprint for many indie bands that followed. The band’s first phase (in the mid-80s) resulted in five singles / EPs and one LP, There Are Eight Million Stories, which reached Number 1 in the UK Independent Albums Chart. They released music on such labels as Creation, Go! Discs and In-Tape and once upon a time they appeared on the cover of NME! The band also toured with The Smiths and were cited by Morrissey as his favourite group of 1985.

The new EP will be titled She Seems Quite Free and it’ll be released in September on Occultation Recordings (UK) and Slumberland (USA) on vinyl and download.

The three track EP features two Phil Wilson songs (Being There, She Seems Quite Free) and one from guitarist Simon Beesley (I’m Undone.) The EP sees …

The June Brides and be found online here: junebridesmusic.com. They’re on Facebook too and Phil Wilson tweets as @philjunebride.

Check out the three tracks off the EP below…