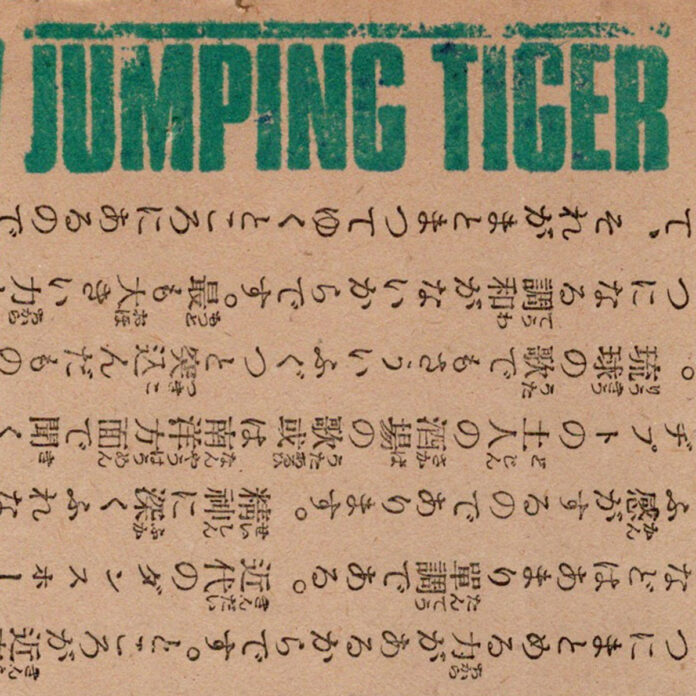 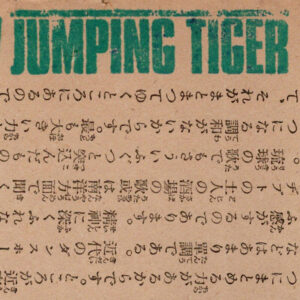 This is an album comprising of demos. Each hit to the skin composed during a rehearsal session for Jumping Tiger. An electronic noise duo consisting of familiar analog toy destroyers Richard Ramirez (vocals and feedback) and Dominick Fernow (electronics and metals). Always prevalent on the killer Hospital Records conveyor belt is the band’s ability to conjure up a graphic expanse of detail to do with synchronizing body and mind in one discharge of feedback by the ounces.

It’s a showcase of a band experimenting with the elements. Of meat and steel. Of trauma and open-mindedness to torture as some kind of maladaptive coping mechanism when dealing with life’s earliest memories which wound and never fully heal. A whirring machine is slicing through steel and sparks seem to fly. A bird of prey circles a dazed ranger in the desert. Constructions of power as a source of pleasure wildly radiate from each intense, convulsion of hot erotic poise. All the while introducing this concept of touch and repetition compulsion to those persistent, pulsating sadomasochist instincts which often come with, naturally, ”swordplay warrior fetishism’’.

So, pay attention as you’re ripped from your bed and hung upside down whilst your skin is shaken from the bones you’re confined in. 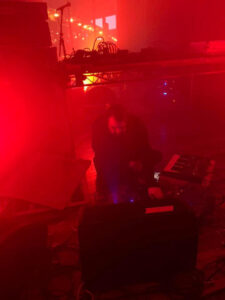 Whilst Katan Cleaned in Bath Steam is equally menacing, riffing on the ideas of reaching the body’s furthest reaches. Cut to ribbons and feeling good. Kept alive and smiling as we evaporate into whispers on the earth’s tremoring edge. Surpassing function and unfurling into something with maximal ability to brave whatever approaches those extremes and ensues thereafter. A vicious, kicking keyboard line fading in and out of focus whilst a flickering light in an otherwise pitch-black space seems to guide the blind and trip into oblivion. Something starting and will be eternally starting as the mood of the piece drones and floats, swells and surges forward like a savage shaking the chains, radiating with a seismic chant, always finding new gaps to fill with every spill of sonic brutalism and unwinding, overlapping lace of the coil.

In a way, the only way, it wouldn’t make sense for the album to be full of lovely, melodies, all sprightly and sizzling delicately. It wouldn’t make sense because we’re dealing with the gut, the blood, the flesh, the bones, the shuddering, visceral aspects of life which heat us in optimal moments of fierce pleasure and severe discipline. This kind of practice manages to manifest itself on pieces like Blowjob Penalty or Feel the Metal, Work the Stones, within which we are soaked with a similar weight, smeared into different shapes of clay, oxidized with a similar shot of heat, like a pack of whimpering creatures straddling horizons of our innermost, able to catch a glimpse of something happening within rooms constructed before God herself got its own set of keys cut and maimed us with a plague.

So, tunes like Semen on Breastplate or Sword Ejaculate on Elders really play with the notions of punishment and push them into new dimensions of assault and assimilation from these internal leviathan chambers. Taking the listener on a twisted journey with dreamlike impact as we visualize the sudden jolt of jumping tiger swinging from the ceiling, in a way that reduces the symbol of one’s penis to a slice of cake on a plate. A pawn of many on the chessboard. A player in the game from within Giovanni Piranesi’s imaginary prisons etched into the ebbs and flows of our own surreal experiences upon each confrontation with a deformed vault and grotesque, elaborate machine. 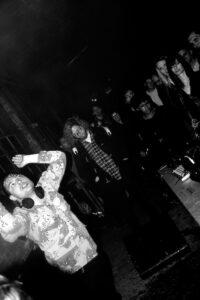 There’s also the unnerving, unholy mutations on Leather Forever, with its furious narrator, the Promethean voice from the static transistor, and the impenetrable hum of white-hot ambiance which occasionally chimes with ecstatic iterations of alertness, but mainly chokes and dissolves into nothing in its short lifespan. Or equally unsettling would be the lacerating Semen on Breastplate before it, like digging sticks of black chalk onto a white wall, with each violent stroke a willingness to permeate its clinical cleanliness as an act of spite. A way to worm one’s way through the armor of another and nest under the skin like true love’s parasite.