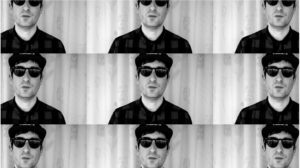 Louder Than War today premiere the brand new single / video by William Gray aka Jump For Neon. ‘Dumbing Down’ is the lead single from Gray’s forthcoming album ‘Vicious Tricycle’ which is coming out on Medic Independent Records June 7th.

‘Dumbing Down’ is “Lyrically about the kind of internal dialogue you might experience when you’re trying to do something creative. If you over-think you can end up with all this doubt creeping in and you start to question things too much rather than being in the moment.This can derail the whole process. Rather than letting that happen, I thought it seemed a fun and different idea to express my actual relationship with the song whilst I was in the process of writing it.”