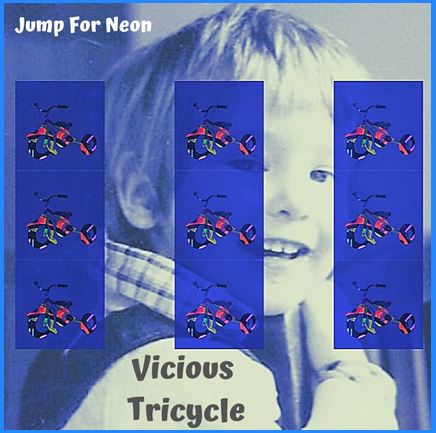 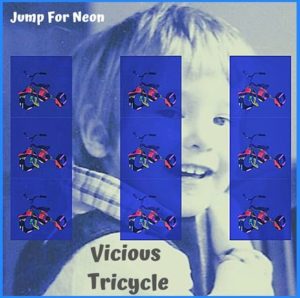 Vicious Tricycle is the third album by William Gray under the Jump For Neon moniker. Simon Tucker finds an artist in a more reflective and playful mood.

William Gray is on a roll. Vicious Tricycle is his third release as part of the Jump For Neon project and it follows on from last years brilliant ‘Put Me Down Dinosaur’ album.  So what is it we are to be expecting from this latest trip into the world of Jump For Neon? Well for starters we are instantly placed within an album that is more playful, lo-fi, subversive and witty than its predecessors. Whereas ‘…Dinosaur’ was a more melancholic and acoustic affair, ‘Vicious Tricycle’ is more fleshed out and nuanced with the drum machine being more prominent in the mix. It is not the drum machine that is the star of the show however as that title belongs to the bass guitar.

In the press release that accompanies the album Gray talks about how he enjoys playing the bass guitar and how he used the instrument to fill out the songs structures. The effect of this means that is an undeniable groove to Vicious Tricycle that helps it move along at a steady pace. The knock on affect is an album that slides along lovely into the summer months allowing a lightness in that may not have been apparent on any of the previous Jump For Neon releases.

Vicious Tricycle’s opening gambits Dumbing Down and Splinternet give you as a listener a real sense of where Gray’s head is at with this project as both are very funny, very groovy and actually quite pointed as the former riffs on the fact that our culture (or its perceived “leaders”) are getting dumber by the second and the latter plays like a funk-injected The Fall number from This Nation’s Saving Grace.

One of the albums highlights is its most recent single Hadron Collider which feels like a relation to American Interior-era Gruff Rhys as it shares Rhys’ psychedelic lyricism (basically blaming all of the worlds recent woes on the switching on of said Hadron Collider) with his gift for making a lo-fi recording seem incredibly expansive sounding.

One of the most powerful moments on Vicious Tricycle is closer ‘Half The Sky’. The reason for its emotional punch is this is the moment all three of the Jump For Neon albums coalesce into one song. Every element, whether that be thematic or instrumentation/production are here. ‘Half The Sky’ plays like the big reveal at the end of a magician show and when you actually notice what is happening you get a great sense of admiration for Gray as he has followed his muse regardless of any outside influence or worries about conforming to a certain style.

Vicious Tricycle is a triumph. It is a slice of wonky pop magic that contains a sincerity and well placed sense of humour. Subject matters may remain on the sadder/darker/emotional side but with the highlighting of the bass guitar and the lighter production this is an album that allows for a more sunny connection. Whereas ‘Put Me Down Dinosaur’ was autumnal and melancholic, Vicious Tricycle is glistening and full shimmy. A warm and welcoming album that shows an artist in complete control of his vision. Where will William Gray go next? I have no idea but I personally cannot wait to find out.