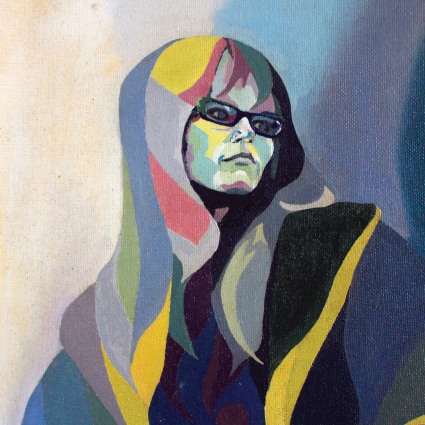 Probably one of the most underrated female singers of the sixties folk movement, Judy Dyble has been enjoying quite a resurgence in the past few years. Louder Than War’s Craig Chaligne reviews the recently released first part of her anthology.

After being unceremoniously dumped by Fairport Convention in in May 1968 Judy joined “Giles, Giles and Fripp” just after the release of their “The Cheerful Insanity” LP with her then boyfriend Ian Mcdonald. Her tenure with the band was short but her next project Trader Horne where the shared the limelight with ex-Them guitar player Jackie McAuley proved more fulfilling for her artistically. They only recorded one album but what an album it turned out to be, “Morning Way” has become a classic and has also been recently released by Earth Recordings. Unfortunately the Trader Horne affair ended up abruptly (check Judy’s excellent biography section on her website for further info) and after one last attempt at being in a band, Judy gave up music to settle in Northamptonshire with her husband Simon where she started working as a librarian and helped out in her husband’s tape copy business. The first volume of this anthology concentrates on recordings from the bands and solo projects Judy was involved in between 1964 and 1982. The record starts off with a trio of home tape recordings from 1964, the first two feature Judy’s first band The Folkmen. “Come All You Fair and Tender Ladies” is an american folk song that was covered by about just every folk singer in the sixties as was the second number “Spanish is the Loving Tongue”. The third track features a wild improvisation featuring none other than Richard Thompson on guitar and Judy on recorder, a twelve minutes free form extravaganza, quite an avant-garde piece for 1964. We then jump three years in time to 1967 with two Fairport Convention Demo’s. First is an excellent cover of Judi Mitchell’s  “Both Sides Now” where Judy’s voice works wonders, the other song “One Sure Thing” appeared in a similar arrangement on Fairport Convention’s first album. Next are four tracks from the Giles, Giles and Fripp period. The recordings known as the “Brondesbury Tapes” were done at the band’s own flat in Kilburn. These songs are simply excellent particularly the first number “Make It Today” with its breezy clarinet intro and displays a feel similar to Burt Bacharach’s “Do You Know The Way To San Jose”. The disturbing “Murder” with its choir like chants of “Murder, Murder, Murder”, flute an guitar interplays and martial drums could almost be an anti-militaristic song. Of great interest are an excellent duo of solo demos from 1973 where Judy is at her absolute best vocally. “Better Side Of Me” with its subtle orchestral touches and “I Hear a Song” really make you wonder what could have happened if Judy had put out a full solo record round these years. A 1982 cover version of Pink Floyd’s “See Emily Play” would have a been a definite hit if had ever been released.