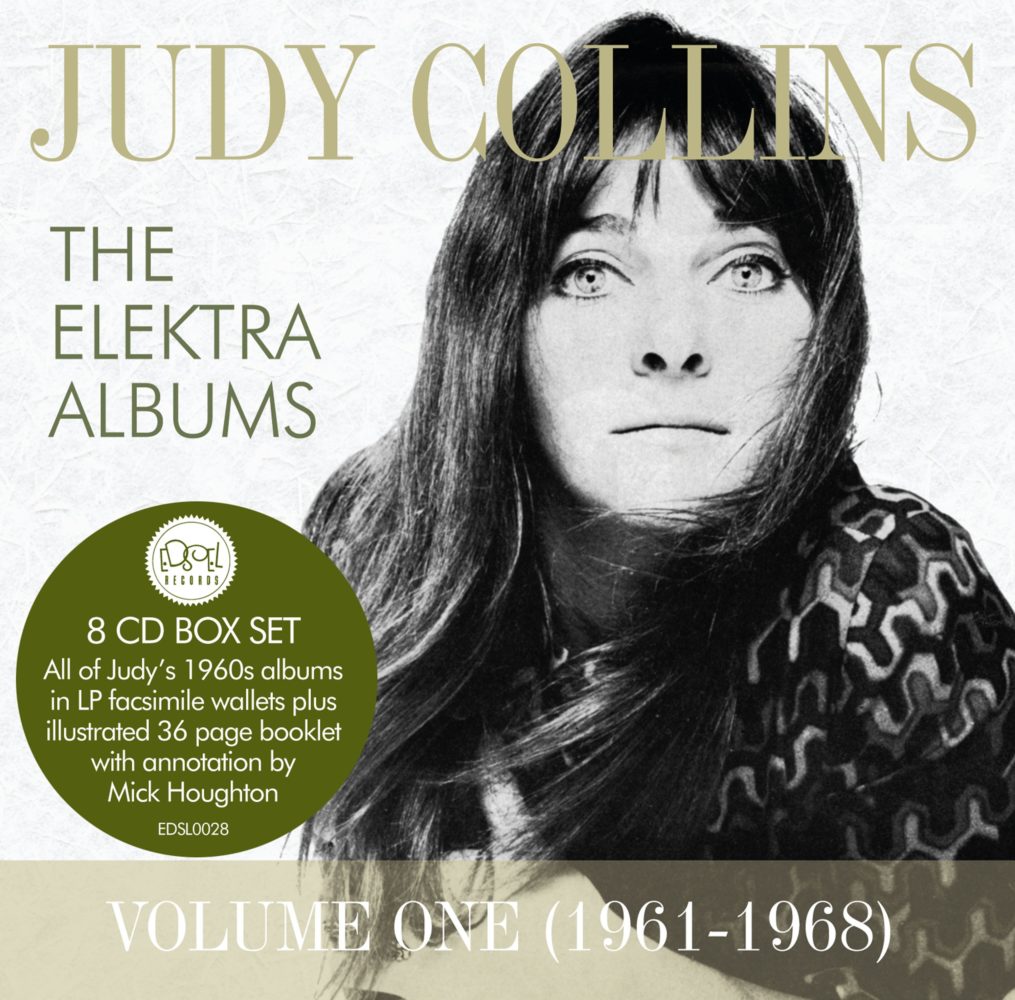 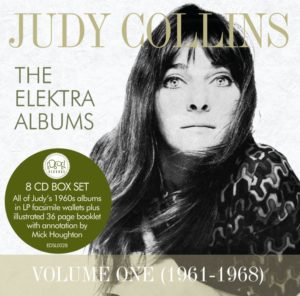 Judy Collins has recently had a box set compiling her early back catalogue released via Demon Records. Entitled The Elektra Albums: Volume 1 this wealth of material more than deserves a closer observation, Matt Mead reviews for Louder Than War.

Collins might not be on everyone’s radar when it comes to popular singer songwriters but her hit Both Sides Now will be familiar for Joni Mitchell’s cover. At that time Joni had no recording contract, on the other hand Judy had established herself as an outstanding singer / songwriter with a knack of picking out songs by Bob Dylan, Sandy Denny and Donovan to perform with her own unique performances.

Having been born in Seattle she made her first tentative steps into music via the Colorado folk scene. Then in the Greenwich Village of New York Collins polished off her act before signing to Jac Holzman’s Electra Records for the next thirty 35 years, which is now being celebrated with this 8 album set.

Collins debut long player 1961 ‘s A Maid Of Constant Sorrow is an introduction to her traditional folk repertoire of the period. 1962 follow up Golden Apples Of Sun continues in the same vein as the debut with Bob Dylan songs added into the mix. Banjo / guitarist / arranger Jim (i.e. Roger) McGuinn is included in her small band resulting in powerful acoustic versions of The Belles Of Rhymnye and Turn! Turn! Turn!, the latter McGuinn would have further success with The Byrds. As 1964 introduces itself Judy Collins 3 features songs by Woody Guthrie and Shel Siverstein showcasing an electric sound as Collins now finds her feet in turning acoustic folk to something of more substance.

The Judy Collins Concert blends traditional ballads with compositions by Dylan, Silverstein, Fred Neil, Tom Paxton and John Phillips. Her distinctive vocal tone, in a similar vein to Mitchell with a dash of Baez, Collins comfortably controls her own arena, mixing folk, pop and Broadway sounds with exuberance, displaying a quaint splash of natural ability to call the big shots in front of a crowd. 1965’s Fifth Album saw her crack the Billboard 100 Album Chart with a further array of covers including Phil Cohs, Gordon Lightfoot and Richard Farina. Her band included John Sebastian on harmonica and Eric Weissberg on guitar.

1966 was the year that really saw Collins take giant steps with her In My Life album. Dylan and Farina were covered as expected but it was the inclusion of recent Beatles hit that changed things significantly. With the addition of her recordings of new artists on the scene Leonard Cohen and Randy Newman her name has been laid in the folklore of these now well-known artists for her acknowledging their talent at this early stage in their careers.

Commercial success was awaiting her 1967 effort Wildflowers which included the well know aforementioned Both Sides Now. It remains Collins stand out song to this day. The album went top 5. Elegant orchestration was awash over the album particularly on Cohen numbers Sisters Of Mercy, Hey That’s No Way To Say Goodbye plus on Belgian writer Jacques Brel original The Song Of Old Lovers.

Final album in this box set is Who Knows Where The Time Goes named after a Sandy Denny composition. The introduction of rock and country to Collins folk tradition mixes well. There’s a full band on board with pedal steel guitars sounding refreshingly appropriate on murder ballad Pretty Polly (a Mitchell b side) alongside diverse melodic takes on more Cohen, Dylan plus Ian Tyson originals. This first in a series of releases sits comfortably alongside the works of folks very best singer / songwriters, giving a reminder to this beauty of an artist’s early catalogue is critical listening material.