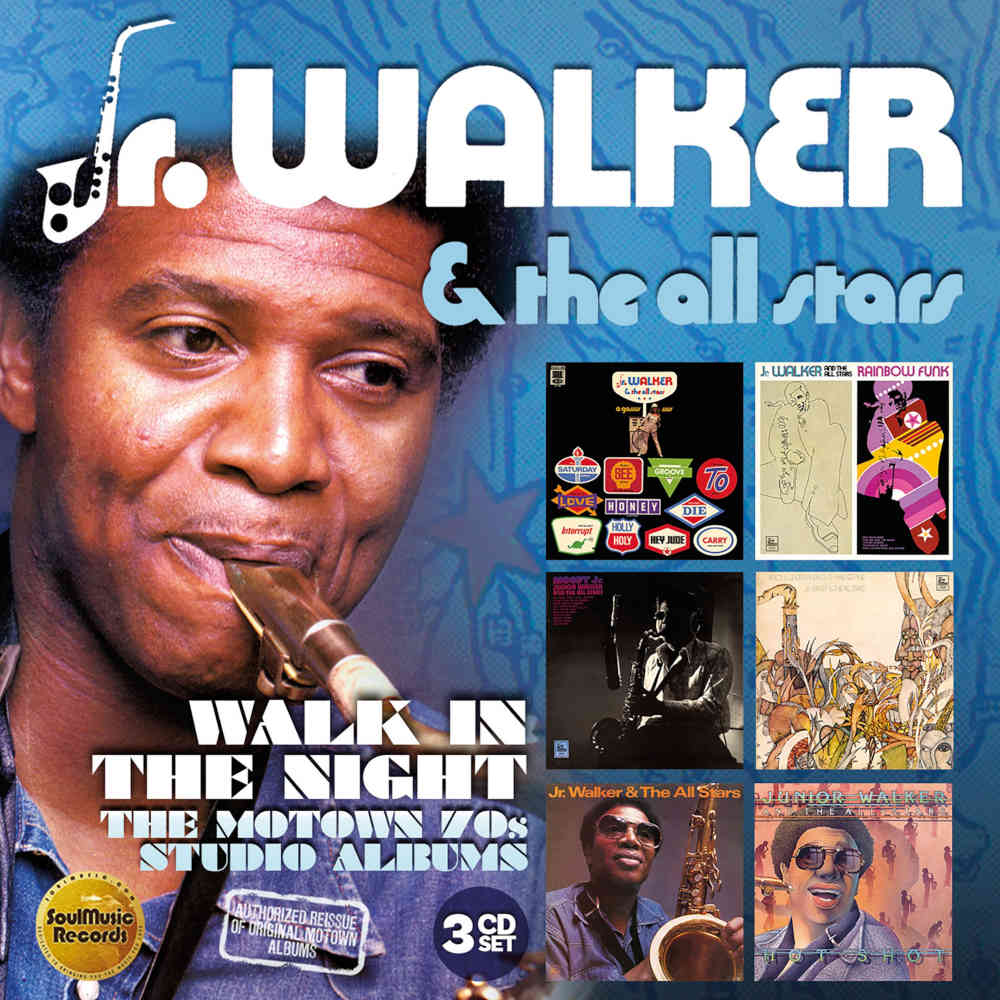 Jr. Walker & The All Stars – Walk In The Night 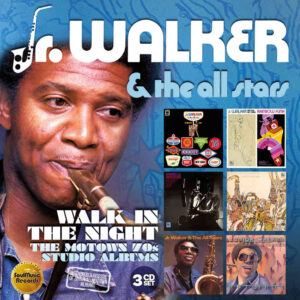 Subtitled “The Motown 70s Studio Albums” this brings together exactly that, the 1970s works by the (I’m A) Roadrunner 60s hitmaker and his band…..Ian Canty feels the groove of the Motown set’s premier sax man….

Autry DeWalt Nixon Jr, better known as Junior Walker, had already seen a lot of life by the time of the first album of this new set A Gasssss in 1970. A troubled childhood in Arkansas meant spending time living with adoptive parents, who encouraged the young man’s love of music and gave him a saxophone as a present on his tenth birthday. Later he co-habited with aunt in Wisconsin (who also was supportive of his musical muse), his natural mother and also his uncle, who was based in Chicago. On arrival in the Windy City he found himself in the middle of civil unrest and his precious sax was pummelled during the fracas. Eventually Junior settled down, got his own place, a steady job and a wife and family. But as the 1940s drew to a close he got the urge to play again, retrieving his repaired sax from his uncle’s place, intent on a career in music.

He joined the band that were to become the All Stars in the early 50s, then known as the Rhythm Rockers and he began using the Junior Walker tag, a nickname from his youth. Meeting producer Johnny Bristol around the time of the name change, it was when Walker and his band joined with Berry Gordy on his Soul imprint (part of the Motown group) that his career really began to flourish. Many US charts hits followed, with the really big ones being Shotgun (which got to number 4 on the Billboard Hot 100), (I’m A) Roadrunner (Top 20 on both sides of the Atlantic) and (What Does It Take) To Win Your Love (which again hit the US number 4 spot and also 13 on the UK charts).

As the 1970s dawned, Jr Walker And The All Stars were still coming off the back of their success from their more recent LP, named after that last big hit. In turn the record spawned three other chart singles in These Eyes, Gotta Hold On To This Feeling and Do You See My Love. So all seemed hopeful for the decade, even taking into account Walker’s reputation for unreliability as regarding turning up for studio sessions.

1970’s A Gasssss certainly starts things off with a swing in its step here. Little Funk and strings touches here and there give the record a feel of the new decade, but Walker’s sax and full-bodied vocal style remained intact. Single and kick-off track of the album Do You See My Love (For You Growing) steps right into the 1970s with a state of the art big production, subtle female vocals assisting Jr’s more rootsy holler and of course that sax. Even though this record was released in the 1970s, it is a step away from the “four to the floor” Motown sound and thoroughly modern (though later track Riding High On Love was made for Northern Soul, being much more in a 60s stomp mode).

There’s a cover of Blood, Sweat And Tears’ And I When I Die which is imbued with a pleasing rawness, nicely offset against the lush instrumentation. A deep Gospel Blues feel is rendered on Groove And Move and if Honey Come Back finds Walker outside his comfort zone with a Soul ballad, he pulls it off with a good amount of verve. Hey Jude gets a Funk do-over and this LP generally delivers as a consistently listenable dance record.

The following year’s Rainbow Funk works roughly to the same template as A Gasssss (there’s another Fabs cover in Something), but also threw the occasional curveball in. Like the Traffic song Feeling Alright, using its odd structure, but setting it to to a rough Rhythm And Blues styling. Take Me Girl I’m Ready tightens up high quality dance to such an extent it comes over like a forerunner of the Philly Sound and Right On Brothers And Sisters is a classy message of unity. The Temptations’ Psychedelic Shack is also versioned with some of Junior’s trademark sax pyrotechnics, which helps the flow of what was already a fluid dance number. Always more at home as a vocalist with an up-tempo Soul shouter, Jr could kick up a storm of James Brown proportions and he certainly shows some of that vim on Pieces Of A Man.

On the second disc here, which features the albums Moody Jr. and Peace And Understanding Is Hard To Find, Walker And The All Stars had pretty much settled into a formula, although both LPs are good enough in themselves it does seem that the band were a little too settled in their work. Junior builds up a JB-like head of steam though on Moody’s opener Way Back Home and the slow R&B of I Don’t Want To Do Wrong is a real treat (Gladys Knight, who co-wrote the song and had a hit with it earlier in 1971 with the Pips, pitches on Moody Jr. with a further three tunes). Don’t Blame The Children is another fine social consciousness song and the title track’s raw Funk is played alongside some effortlessly cool female vocals.

1973’s Peace And Understanding comes out fighting with a defiant I Ain’t Going Nowhere, which despite its clearly evident suitability for the charts was relegated to the b side of non-album track Gotta Hold On To This Feeling. The two part Gimme That Beat is Funky and very cool indeed, the polar opposite of the rather MOR version of Johnny Nash’s I Can See Clearly now. Jr. And The All Stars do a better job on Carol King’s It’s Too Late, but the spectre of Easy Listening hovered in the background at times in these couple of albums. The title track, which brings this record to a close, is possibly the best thing on Peace And Understanding. A Bo Diddley rhythm buried deep down, those unnamed female singers doing wonders again and Junior’s feisty vocalising, it provides a great end to the LP.

The self-titled 1974 album (only released in the UK) steps away a bit from the Soul shouter/sax instro/Funk formula and is a little uneven perhaps, but there is enough to interest one. Stevie Wonder’s You Are The Sunshine Of My Life just avoids another brush with the middle of the road by having Wonder himself appearing on harmonica, but to be honest the first three offerings on this LP are pretty forgettable, you can see why the decision was taken not to give it a full release based on this evidence. Better is the more upbeat Boogie Down and Dancin’ Like They Do On Soul Train is a prime piece of 70s Funk. The latter and Until You Come Back To Me (That’s What I Gonna Do) nudge towards the Disco dancefloor.

On the whole though the Jr. Walker & The All Stars album is bitty, which is why I’m happy to report that the next LP Hot Shot was a return to form. His Blues-based sax riffing was seldom heard better than on the first track, I’m So Glad. the self penned Probe Your Mind and Hot Shot (a critique of the music industry) found him and the All Stars firing on all cylinders, intense and very Funky indeed! Love (Keeps Us Together) could set light to most any dancefloor and I Need You Right Now has the talented Thelma Houston leading the way. This is wall to wall great stuff and a brilliant way to sign off this collection.

After Hot Shot Junior Walker went solo for a few years, before rejoining the All Stars in the 80s, though they struggled to make much of an impact and recorded only sparsely. People only seemed to want the old hits I suppose. Junior passed away in 1995 at the age of 64 after a long battle with cancer.

Despite the fact that as the 70s went on Jr Walker And The All Stars’ chart career tailed off, Walk In The Night shows that they kept producing spirited and enjoyable albums, albeit at times a distance away from the “cutting edge”. Junior’s signature sax was a great sound, but may mean that you wouldn’t want to listen to the whole three CDs in one block. However, although A Gasssss and Hotshot are my picks, pretty much any one of the six played on a warm, lazy day makes for the ideal, relaxing accompaniment.

This set sounds great and has an authoritative sleeve note from author Sharon Davis, which sets out Walker’s early career and later work whilst focussing on the 6 albums corralled together here. Maybe Jr Walker And The All Stars days in the Top 30 were drawing to a halt, but the quality control here shows they never slacked off. There’s some sweet, sweet Soul that sticks in the mind and gets the toes tapping – Walk In The Night is more than alright.