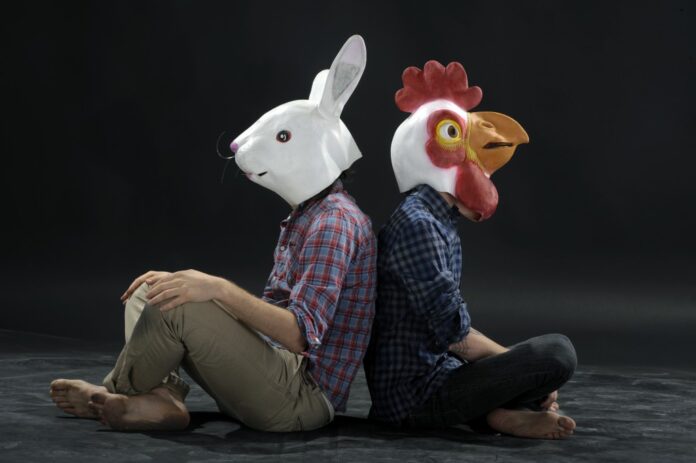 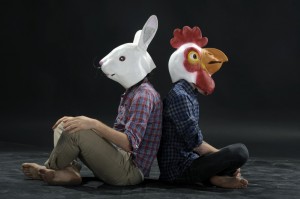 The scarecrow like frontman stands side on stage front, his leg is twitching as he leans into the mic and delivers his vocal whilst twisting the controls of keyboards and computers delivering a  perfect twisted dark wave stained pop filth.  On either side are two drummers who deliver the tribal beat and the composite whole is breathtakingly original and exciting as the Bologna based band rewrite the rule book yet again and somehow manage to convince a big audience that their future beat is the sound track of the now.

They exist int he experimental yet accessible hinterland of indie- the fringe that keeps getting into the eyes of the mainstream indie dullards and have toured with the likes of The Editors, Art Brut, Modest Mouse, Arcade Fire and Sebadoh and are about to do their first ever US tour.

This is an electronic music with a dark edge, with a psych edge and massive beat with the huge added bonus a real live, sweating, sweltering drums- one of the drummers is an animal, a crazed animal as he powers his way through the songs in a truly effective and brilliant style. The songs are crafted with a great undertow of twitching melancholy and inventiveness that makes them hypnotic in their power and imagination. There are shades of Neu and Melodia and Faust and other Krautrock pioneers in their muse along with keyboard explorers and other musics.

In 2014 music is a truly international language, no more does the Anglo American axis rule supreme – sure London and New York and Manchester are still talked about in hushed tones of reverence and thrills whilst JoyCut’s home town of Bologna still feels like a mysterious high decibel location, but a location according to the band where a whole new homegrown scene is emerging of varied musics which is they themselves are anything to go by is proof that the template is being reinvented on the fringes.

With a love of electronic music and krautrock Joycut combine the strands into their own holy whole. The singer mad dances centre stage finger stabbing his keyboards and the electronics and delivering a moaning and delirious vocal whilst the two drummers pound away

It truly works-instantly rhythmic is gets a initially bemused crowd dancing, it has a melancholic undertow and the kind of rhythmic repetitive rush of the best of krautrock- but it’s less obvious than just copping the Neu motorik groove and playing ad infinitum. This is closer to extraordinary sonic adventures of Faust or even the crystalline beauty of Melodia-those melodies you can get lost in- those electronic dreamscapes of blue tinged beauty but always counter pointed with the insanely brilliant drumming to create a sound that pumps you full of energy and a salving escape of beauty.