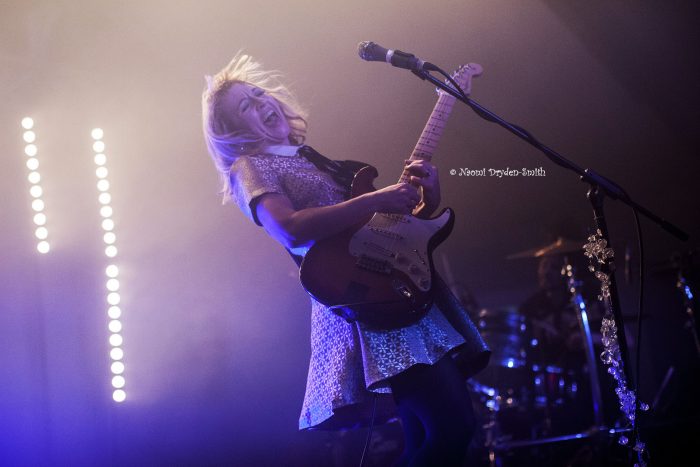 Louder Than War’s photographer and reviewer Naomi Dryden-Smith, was seduced by the Welsh trio Joy Formidable as they took the Oval Space in London by storm.

If you didn’t know where it was, it would be hard to miss the Oval Space – nestled at the bottom of two disused gasworks in the heart of Bethnal Green, and reminiscent of an aircraft hangar. It’s another tick off the East London music venues checklist. As one fan commented on the way in “it’s a bit like going to church…”. At around 1000 capacity it’s a great space for intimate gigs. 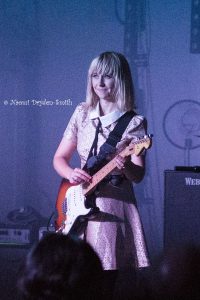 Welsh band The Joy Formidable hit the stage with a burst of smiles and energy, Ritzy Bryan in her trademark short frock and peroxide bob, her baby-doll smoky voice and sweet smile belying the guitar-playing skills that are to follow. She is a formidable frontwoman, and her discernible Welsh lilt makes for easy comparison with Cerys Matthews and Cate Le Bon, whilst her rock persona has glimpses of a sultry Chrissie Hynde and the emotional dichotomy of Shirley Manson. Ritzy’s very capable bandmates Rhydian Davies and Matthew James Thomas are similarly energised as they launch straight into a hard hitting, pumping version of Cradle.

The band’s inclination to prog rock is showcased by songs like Passerby, with riffs reminiscent of 70s greats like Zeppelin, and the newer Liana, which starts as an acoustic ballad but soon morphs into a wall of swelling guitar sound. The setlist loses momentum with Silent Treatment, a pretty ballad about broken relationships, which is either a miscalculation or just not loud enough, tough to hear over the chattering audience who should know better.

Thankfully, the babble is soon drowned out by Maw Maw Song, and the place fills with fierce drumming from Thomas and angry lyrics, guitar/vocal lines that wouldn’t be out of place in a 70s rock musical. A highlight of the night, and of new album Hitch, is The Last Thing On My Mind, a track that Garbage might envy. Ritzy and the band are impressively interactive with the audience – and also each other – constantly communicating, nodding and smiling, added to by Thomas being seated side-on – there is a definite feeling of being in this together. Their enthusiasm is contagious. 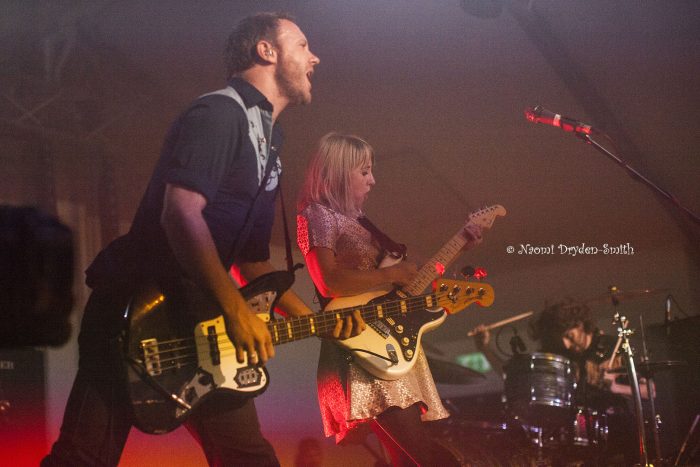 The sheer power that this band can put out (it’s sometimes hard to remember that there are only three of them) is perfectly demonstrated during the encore of Greatest Light and in their best-known song Whirring, which channels the likes of Nirvana and the white noise of a 90s’ Muse. Halfway through Whirring, Davies’ bass packs up but the lack of it isn’t even noticeable over the impressive noise that Ritzy is making with her guitar. The audience is pinned to the walls by a cloud of sound.

As the lights go up and the crowd files out, blinking, to the dramatically divergent Alo Alo by Carmen Miranda, it’s hard not to wonder what just happened. Go see them.

All words and photos by Naomi Dryden-Smith, find her on Twitter. Also on Facebook. Naomi’s Photography portfolio can be found here.