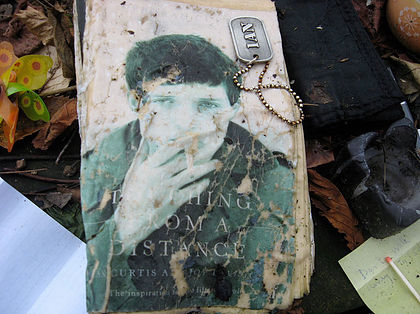 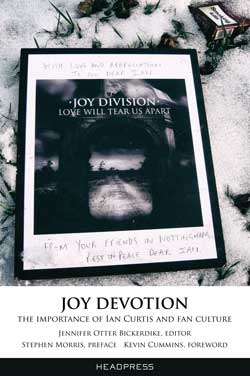 More than 35 years after Ian Curtis’ death fans of Joy Division still make a pilgrimage to his grave, still feel connected to the music. In Jennifer Otter Bickerdike’s latest book she brings together a collection of essays from fans and those in and around the band to investigate the importance and meaning of being a fan.

Music journalism is, quite obviously, centred on the artist and their work. Most often these days this is a basic analysis of what the music sounds like, what influences are resonating through the new notes but occasionally is something more,  a critique of where this music fits culturally, socially or politically; not just what is this music, who is this artist but what does this music and artist mean within a wider context. At either end of the spectrum you find that the music is quite often divorced from those who are listening to it, who are connected to it: the fans. Jennifer Otter Bickerdike’s work turns this around and looks at the fan first, and what music is bringing to them as an individual or a collective, the different ways music affects and connects to the individual.

In Joy Devotion she has curated a collection of essays that look at the importance of Ian Curtis and the music of Joy Division, as well as the enduring fan culture nearly forty years after they existed as a band. It springs from her personal journey as a fan of the band – in it she writes of how their music carried her through her darkest times – but also from Joy Division forming the basis of her PhD study, where she photographed and documented the trinkets left on Curtis’ grave over the course of a year.

The book as a whole includes essays which are deeply personal connections from fan to band as well as objective commentary on the importance of place to fans, on the secular religion which fandom can become, and the reality of musical output compared to the image and myth of those producing it. As Stephen Morris describes it in his preface: “[a] well written study on the curious interaction that takes place between the music and the fan. An interaction that can give meaning, security and identity in a world where these things are in increasingly short supply. “

There is a fascinating array of connections to the music and Ian Curtis expressed in these essays, showing how individual the reasons for being a fan are even as they draw together a community. There are discussions on psychogeography of Manchester (broadly the effect of environment on emotion and behaviour), the paradoxical nature of the graves of famous figures (the unquiet of a resting place constantly decorated with trinkets and visited by fans), and implicit commentary on masculinity, authenticity, mortality, and disability. While these topics may sound cold and academic the book is a warm read, non-judgemental and open-ended. This is a snapshot of individual stories rather than a conclusion on what the continued fascination with the band, and with Ian Curtis, say about the fan community or more widely on the human experience; and for readability it benefits from being so.

What makes this collection of essays stand-out is there is something of interest even for those who would not consider themselves Joy Division fans, or are only passingly familiar with the music or vaguely aware of the context of the band in Manchester and wider music history as well as those who are strongly connected to the music and band.

This book gives greater insight on a specific level to the band, particularly through the interviews with Kevin Cummins, and contributions from others on the scene including Hacienda DJ Dave Booth, through consideration of Factory Records, and oral history of some of the band’s more infamous gigs. They also give insight on an individual level of being a fan of this band through the shared experience of collecting records, finding meaning in lyrics and forming tribute bands.

But these essays cover something often missing from writing about music, they speak deeper, more strongly and more generally of what it means to be a fan; reflecting the myriad ways in which through connecting to music we can become more connected to our selves and the world around us.

Joy Devotion is out now via Headpress and you can find out more on Jennifer Otter Bickerdike’s website. The author will do an in conversation with Kevin Cummins, and book signing, at Piccadilly Records, Manchester on 4 November at 5.30pm.

All words by Sarah Lay. Sarah is editor of Louder Than War and you can find her on Twitter and more from her in her author archive here. She is executive producer of The Rumble on Radio Andra and provides Louder Than War’s recommended track of the week on the show. Tune in Tuesdays from 8pm or listen again here.