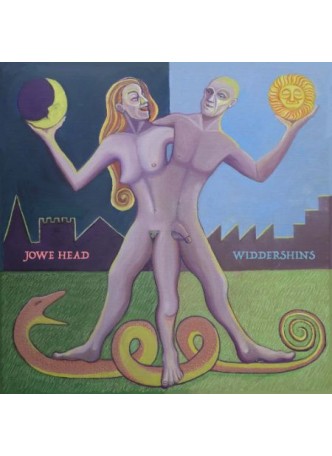 New album by the ex-Swell Maps/TV Personalities man Jowe Head, where he explores both ancient and brand new songs in an Acid Folk Post-Punk extravaganza…..LTW’s Ian Canty warms his cockles on the burning Wicker Man…….

It has been great to see the late Swell Maps members Nikki Sudden and Epic Soundtracks finally get some critical respect for their solo works recently, both richly deserving of the renewed interest. But what about their ex-bandmate Jowe Head, who has produced his own fascinating if sometimes flummoxing output since his debut Pincer Movement in 1981? Whilst keep himself busy in bands like the Palookas, TV Personalities, The Demi-Monde, Angel Racing Food and current outfit the Infernal Contraption among others, he has also knocked up a fair few solo records. Widdershins (apparently this appertains to an age-old superstition against walking anti-clockwise) is his first solo effort since 2006’s From A Parallel Universe and it’s a corker.

Never being one to stick to the run of the mill, Widdershins seems at first to be a double album-sized look at how the ancient and modern interact with each other in the UK of 2019. But whereas many artists would simply rework Folk ballads that would adhere to the general concept, he mostly gives them them new and unique settings, but sometimes he does not. It’s just not that simple, with musical excursions outside of the UK’s narrow borders (and minds) deviating from what appeared on first sight a purely British concept. But this is a highly enjoyable and accessible enigma, Fortean subject matter and all included. It all works perfectly within its own internal logic, ebbing and flowing gracefully with spooky scares and wryly applied humour dealt out as appropriate.

Jowe often plays up the dramatic and primeval elements that were intrinsic to these old songs at their inception and styles his own compositions in a similar way. In doing so he calls on a talented retinue to back up his multi-instrumentalist prowess (he is even listed as playing “bicycle”). Drawing from a wide range of influences and sources, Jowe takes each and bends it towards his desired aims. The only thing I can think of that actually sounds a bit like this record is the early Residents material – occasionally Jowe resembles the British cousin of the “singing Resident” – not at all bad company to keep. But it is only fleeting and this LP is very much stamped with its own individual charm. The stories told are fascinating and engrossing and the music inventive and original – you won’t find much else that is like Widdershins.

Kicking off by affixing a steely sounding, sea-shanty-like feel to ancient death ballad Lyke Wake Dirge (some great strings work too on this), Jowe follows it with the self-penned Tankerton Bay. Even so a raw, primal Folk atmosphere dominates early on. The version of the Incredible String Band’s Minotaur Song is full of comic-horror glee and the following Nottamun Town is another ancient song, this time dealing fear of crowded city streets. Which may well ring true to anyone who has been down London’s Oxford Street lately. The sombre treatment of this one works well after the humour-driven nature of its predecessor.

Particularly smart is Ode To Krampus, the story Father Christmas’ oppo who instead punishes the naughty kids, rather than giving them gifts. That it is given a rather more serious setting than Minotaur Song (which is how it could have gone) works well and Jowe is relishing every creepy word of this one.

Changing pace we come to the short blast of Extra-terrestrials, which doesn’t go down the usual UFO/flying saucer route. Instead this posits that life on earth may have arrived by meteorite from elsewhere and is accompanied by a electronics-boosted fuzzy Garage sound. This is the first track on Widdershins that has a plain link to Jowe Head’s back catalogue in musical terms at least. Next Extras again is more in a driving Post Punk mode, with Jowe’s voice sounding mighty above the music, crazed backing vocals propelling things along.

Electric rhythms, an austere feel and Head’s plaintive voice duetting with the more operatic tones of Queen Christina make the tale of Joseph Cornell in New York 1930s an oddly Velvet Underground John Cale-style thing, it works very well. This album is made up of so many diverse moods, but it somehow all hangs together. Moving on the song Tom O’Bedlam, taken from a 17th century poem, is much more of a Folk Punk thing, with Heath Stanley’s guitar on this shimmering. Gower Street ends side two of the first vinyl disc (it’s track 10 on the CD) with a ramshackle electrical rattle, Jowe singing in fuller, less mannered style than elsewhere on Widdershins.

Trees ramps up the Folk Horror with a story of how nature takes a revenge on man’s mistreatment of it, bass powering this mid-paced piece of weird Pop Rock along. Queen Christina provides her song Baba Yaga, a tale of a black witch from Russia. This is a really catchy duet and would make a great, mad hit single, it is even a bit danceable. Queen Christina sounds here like the love child of Russell Mael and Lene Lovich! The depth of this record is amazing. Half-Bike follows and takes its cue from Flann O’Brien, as man and machine slowly become one with Syd Barrett’s Bike parked in the bicycle rack somewhere in the background.

Ein Stuhl In Der Holle marks possibly the only time an Einsturzende Neubauten song crops up on an Acid Folk Post-Punk Psychedelic LP , but again seems to have its roots in a traditional death song. Metal is bashed, as one might suspect, but this another humourous two-hander between Jowe and Queen Christina. Ed Bones trombone lays lazily and delightfully on top of the theatrical structure. Bells and queasy wobbles herald the start of King Of The Corn, now this is right smack bang in Wicker Man country. The first part of what may have a sequel later, the lyric here deals with the growth of crops and the knock on effect on the farmer’s fertility. There’s an ancient and menacing feel here with a chilling synth part, this tune is simultaneously bracing and eerie.

Hitting the final stretch of Widdershin, we have first the electronic pulse of the chant Long Live The Sun. This is a self-penned number willing the comeback of warmer weather in the depths of Winter, perhaps hinting at SAD’s origins in a frozen Britain of Pagan times. Two Ravens details the eponymous exploits of those birds, again in a malevolent comedy style as the ravens’ prey here includes humans. A little like Lyke Wake Dirge in terms of sound, more guitar on this one though.

Bolweevil Holler again takes us out of the country to rural USA with a song that Shirley Collins famously covered. This, despite Jowe’s assertive and one of a kind voice, is quite a traditional treatment. Bringing things to a close is Shepherd’s Lament, finding inspiration from Psalm 23 of the Bible, but repositioning the shepherd as a dozing security guard. The sense of dread is played up to the full by the track’s slithering rhythm, with again Jowe singing this one fairly straight – He’s absolutely spot-on as the guide on this album, knowing exactly the right times to stress the comic or the macabre, the time for fun and/or fear, that’s as well as playing a bewildering amount of instruments. Chanting voices bring Shepherd’s Lament and Widdershins to an aptly sober, slightly ominous ending.

I hope that has at least given you a flavour of the scope Widdershins, a lot of different sounds and styles are utilised, but never just for the sake of it. This LP accomplishes what a lot of records claim, but ultimately don’t fulfil, i.e. taking the listener on a real journey. One that is fraught with a bit of danger, occasionally deviates wildly, but always delivers a lot of food for thought, along with some excellent music. Looking for a real musical experience instead of a set of ditties? You found it. Looking for something that reflects the current obsession with Folk Horror, but recognises the passage of time, feels true and tries to make sense of it all in 2019? You got it. Looking for a simply great record? You got it. Now get it.