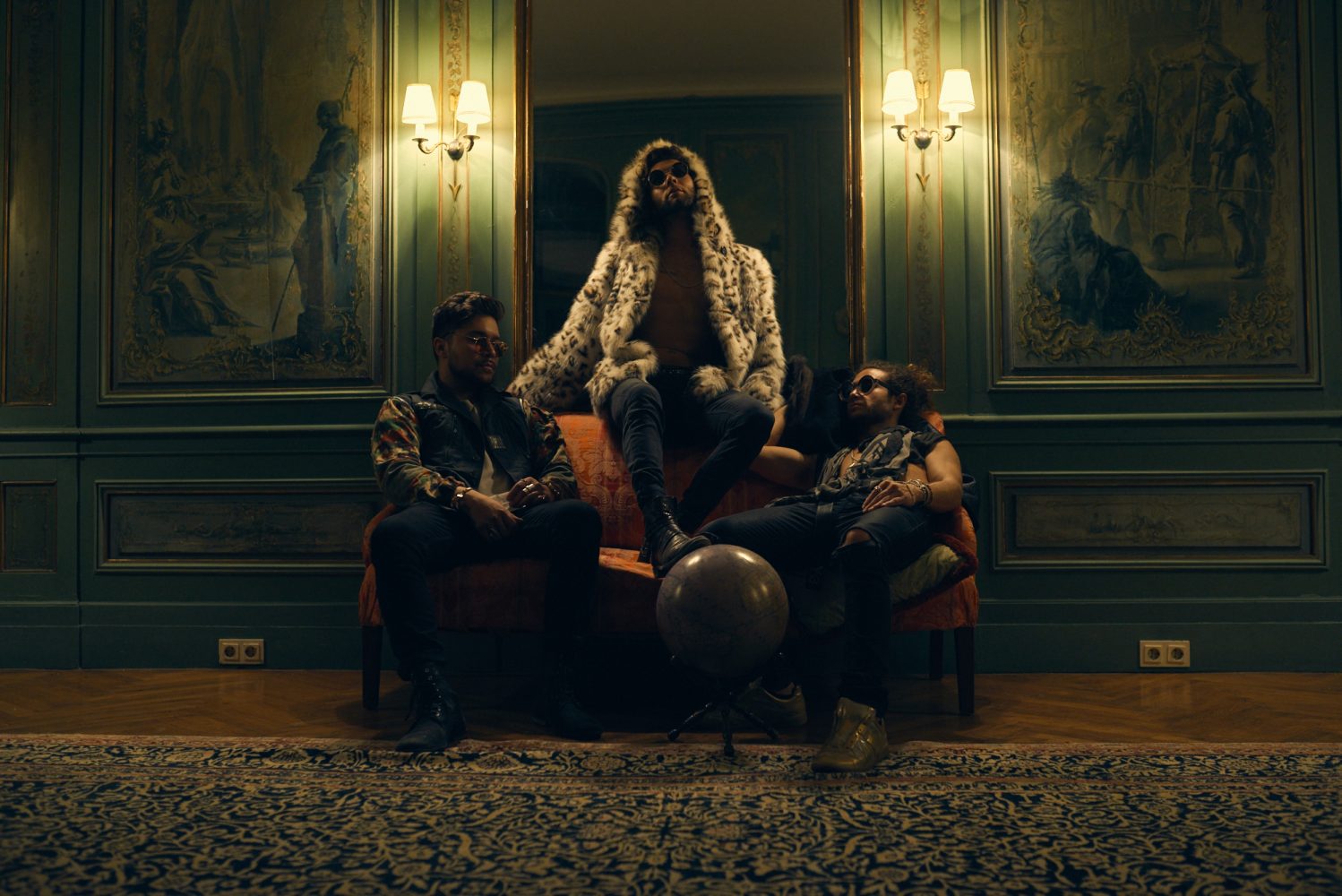 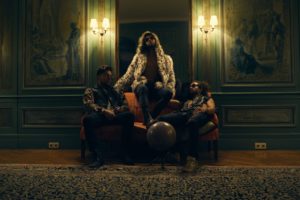 “Raspberry Kiss itself represents being blessed with a profound revelation that changes who we are. Just like when we formed as a band we felt kissed by something greater than ourselves”.

Most definitely a band to watch this year, NakedElephant presents its audience with an avant-garde sound that quickly and uniquely distinguishes them from others. The band has perfected their craft while gigging in the city of Vegas, amongst the sparkle and glitter of the dazzling surroundings. However, this is a trio with a social conscience as evidenced by their name, NakedElephant which represents an elephant minus it ivory tusks.

Louder Than War: Josh, can you explain the premise of the video, Raspberry Kiss.

I like to tie everything that we are doing together. Our name is NakedElephant, which is inspired by an image of an elephant without its tusks. It was a testament to the absurdity of human greed. That was a good symbol for us. When we were in Austria, I spent a lot of time there, we found this castle with ivory in it, with a bunch of skulls. It was this old hunters kind of a killer style castle. We thought it would be perfect for the video, because we wanted to carry on the theme of human greed and use the video, Raspberry Kiss to make a statement to the war machine. Basically, we staged a war room, which is that chess game. You have two diplomats playing chess and designing war if you will. There is a case full of rubies on the table. Taylor and I and the band come in as these time traveling James Bonds with our own case full of raspberries.

The idea was that we would go in and replace the case of Rubies with the raspberries and then leave. It was just a statement that we were going to take the profits from all their manoeuvers and return them back to different areas that have been affected by their agreed. It carries on in a series. The next video is part of the series. This is just the first step where we take the rubies. It ties in with the song Raspberry Kisses because raspberry, the taste of it, is made up of a compound called ethyl formate. That’s a building block of protein, a building block of life. Some scientists found this when they were searching for life in outer space, or so they say. So the idea of the song is just being in tune with life. A greater life than ourselves. The life that’s out there, and a raspberry kiss would be the blessing from the universe embark on our mission. So we exchange that symbolically on the table to basically say “here is our blessing from the universe, we’re going to go ahead and take those rubies from your war machine, and bring them back to the places that were affected by you”. There are dancers there that kind of symbolize a higher power watching it all go down. Sometimes they wear black, sometimes they wear white – there are a lot of symbols in there. So that’s the gist of the video.

That’s a little heavy, but way cool. So are you basically a band that wants to raise awareness or was that just a one-time project?

That’s just who we are in general. It’s good to express what confuses us. There’s a lot of things confusing, not just the ideas of war… so it’s good to speak of them. We are really passionate about the elephant itself. We filmed with a whole family of elephants in Thailand and decided to adopt one of them from out of the circus. It’s a huge part of what we are and what we want to continue to do.

I love the whole concept. And your music is really great as well.

Well thank goodness. We’d be in the wrong business.

Aside from the video, will you be touring?

Right now we are rehearsing our shows, and have spent the last five years here in Vegas playing all the different venues…. all those four hour gigs… so we’ve been doing the Vegas circuit. I finally decided to stop doing that and just take the risk and write an album. When we did that we did it in a studio that we built ourselves and that’s way different than anything we’ve ever done. I’m like and Okie from Oklahoma. I have an acoustic guitar and an out of tune piano. I wasn’t allowed to listen to secular music. I have no idols, I don’t know actors or actresses… I’m the most ignorant musician of all, but I write all the songs. They started on this acoustic guitar, then we had a studio and all of a sudden free time. We just experimented a lot. We have a lot of things to rehearse because what we recorded was beautiful, and rather complex, and there were three of us to make all these sounds. We have five now total, but we’re going to hunker down and rehearse a lot. We have a couple of shows coming up in Vegas, not official to announce yet. We’re looking to head over to the UK this summer to do a couple gigs and festivals. It’s so exciting, I come from a town of 500 people, no kidding. Actually, I don’t think that there are that many people, we just have a sign that says it. There is a town 20 miles north of our little village, it’s a tiny town as well and we just got a couple of our songs in a Sharon Stone movie, so their newspaper wants to interview us. The idea of traveling, I didn’t think I’d ever leave the state of Oklahoma, let alone become a global band. I mean I always kind of believed it, I was a lunatic. These are exciting times for us.

It’s amazing you ask… I just told a friend this two days ago in Hollywood. I had this crazy vision. I was sitting on the driveway here in Malibu looking at the ocean, and I looked over to Taylor our brilliant guitarist, and engineer, (he’s from Vegas, he grew up there), and I said “Man, we’ve got to do Cirque du Soleil”. He had kind of mentioned something similar. The reason is because I’m obsessed with the idea of the gates of heaven opening and what that would it look like to different people. I just picture this beautiful goddess, this big blue face that opens their eyes with this colourful wheel on her forehead. I wanted to make a face out of dancers so when her mouth moves it would be the dancers that are moving, hanging from aerial silks. That was inspired because our good friends in our music video, all those dancers became really close friends, worked so hard. They are all volunteers by the way, we found them in Vienna. I was searching so hard for everybody and trying to cast this impossible video and I found these amazing people. They are dancing in aerial silks in the video and it inspired this idea of this face made out of dancers, like a three-dimensional face. That’s my dream vision of a stage something that speaks with art.

That’s absolutely insane, I love it…

Sweet. That’s a different response than I usually get, it usually just ends with insane. Then it goes, that is an insurance disaster.

Do you know The Secret, I feel like you do?

Of course, I read it. I feel like I know the secret. It’s astonishing right? It’s a good time to look in the mirror.